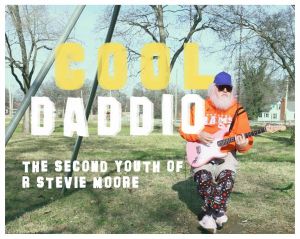 An R. Stevie Moore documentary film is in progress which aims to enlighten a new generation of curious fans about the prolific home-taping legend and his enduring impact on popular music.

The idiosyncratic stories of troubled outsider souls Daniel Johnston and Roky Erickson have already made it to the big screen, and their influence on fellow musicians is pretty exhaustively acknowledged. Despite self-releasing over 400 titles since 1968, R. Stevie Moore, that great yet sometimes crotchety character with his flip-shades, mismatched pajama sets and dyed blue, rubber-banded beard, still remains relatively unknown.

London based filmmakers Imogen Putler and Monika Baran are now working on a well-deserved documentary project about this Tennessee-bred DIY home recording pioneer, without whom the current ‘bedroom tape’ boom would surely never have been possible. Cool Daddio: The Second Youth of R. Stevie Moore hopes to chronicle his creative legacy and capitalize on new-found interest in the man, thanks in part to the success of collaborator and friend Ariel Pink, who shares Moore’s weird musical eclecticism and provocative disposition in the media. Moore goads the oversensitive dullards prone to outrage by regularly slaughtering sacred cows and being churlishly outspoken with his annoyances, but these things are just recreational fun for him, and what he really needs is some long-term recognition as an artist who laid the groundwork for independent home taping with his uniquely obstinate and unconventional methods.

As of now, the project has exceeded its pledge goal, but any extra contributions will help the filmmakers fully realize their vision and fund a second US trip to gather many invaluable insights into RSM’s life and work. Show your support on the film’s official Facebook page and visit the Kickstarter link here for more details on the project and an informative introduction to its one-of-a-kind subject, Mr. R. Stevie Moore.