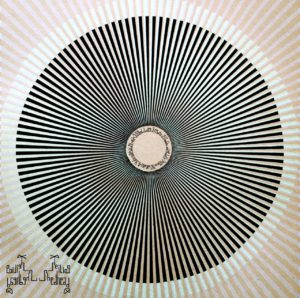 Louder than War’s Ioan Humphreys falls in love with R.Seiliog as he announces his new EP ‘Shedhead’ available via digital service platforms now.

Welsh electronica mentalist R Seiliog has been on my radar for a while now, but i never got around to listening to him. It was only until i got an email about his new ‘Shedhead EP’ release that i finally heard the sparse minimalist brilliance of this artist.

R.Seiliog is the alias of North Walian musician/producer Robin Edwards. Releasing the warm analog psychedelia of 2012’s Shuffles EP and his debut long player 2013’s Doppler, Manic Street Preachers were so inspired by his debut album that they entrusted Edwards to remix Manic Street Preachers’ single ‘Futurology.’ In 2014, the release of his critically acclaimed second album ‘In Hz’ saw R. Seiliog’s work receiving airplay from the likes of Radio 1’s Huw Stephens, 6 Music’s Mary Anne Hobbs, Radcliffe and Maconie and Lauren Laverne. This forthcoming Shedhead EP is the latest bold release from a very prolific artist.

Kicking off the EP with ‘Myopia’ you immediately get a good measure of where R Seiliog is coming from with his music. A quiet corrosive noise, reminiscent of Fuck Buttons’ work melds and bends into a spacious, expanding beat that has an almost Balearic feel to it. This sound would not be out of place seeping out of a club in San Antonio Bay, Ibiza. Half way through it slows down to almost a complete halt. This is just for everyone to catch their breath. The beats start up again and it’s a really blissed out experience.

My review of single ‘Cloddio Unterdach’ is here. Needless to say i bloody loved it!

The gloriously titled ‘Hyni in the Hivemind’ is an epic 9.11 of a track. It is slow and measured with its minimalist keyboards and beautiful chord progressions. The gentle monotony of the track can get bleak at times and the places it takes you to aren’t particularly comfortable. But this is what i love about R Seiliog. Who wants easy listening all the time?… Or at all come to that?! The darkness becomes lighter as the mechanical, nay, clinical beats kick in to drive this opus to its natural conclusion. Lovely intense stuff.

‘Static-Sun (Maxwell mix)’ is another minimalist track with a haunting sampled voice under an increasingly danceable tinny drum beat.  The voice reminds one of a space station’s stern instructions to new arrivals. With the electronica on top, this conjures up myriad visuals and emotions. Just brilliant.

Final track ‘Psylent Cluster’ takes this space analogy and runs with it. It is atmospheric, but with a slight corrosive synth noise element to it which is very pleasing. Again, you get the blissed out effects and beats, but what you also get is another very danceable track that gradually ramps up and up to a nice crescendo that is drenched in noise. Gorgeous.

This EP is definitely in my top 20 releases of 2016. It feels like it is music for space men. And i don’t mean that in a druggy way. I hate drugs. What i mean is it is literally a soundtrack for for space travellers as they float into perpetual darkness. It has its bleak moments, but it also has hope. I like that. Listen to this now.

Louder than War also had a quick chat with R Seiliog here:

Ioan @ LTW: Hi Robin. Where are you? What are you doing right now?

R Seiliog: Hello Ioan. I’m in a tiny studio located in Denbigh, North Wales. I was watching a very awkward and noisy Naurdwuar / Sonic Youth video from ’91 while eating a delicious meal. That’s about all I can report right now.

LTW: I reviewed ‘Cloddio Unterdach’ the other month and described the track as being “…very danceable. Really laid back and very cool. This needs to be on playlists across the land” Does this fit in with your intentions of the EP. Or did i get it drastically wrong? :-)

RS: I don’t believe that’s wrong or drastic at all, if that’s what you feel then that’s really great, it’s nice to hear anyone thinks that about it, thanks!

The EP is a collection of tracks spouted from the same font or timeframe; so I hope the tracks retain similar sonic nuances. I tend to like records that have a flow or continuity between tracks. And yeah! I’ve been totally focused on intentions of hitting up every playlist across the land, I’ve even constructed a little boat from old pirate boot soles so it can sail to feature on playlists through all the lands, we’re just waiting for the winds to change. Bon voy!

LTW: There is a hell of a lot of space in the tracks on offer here. Especially ‘Myopia’. Was that intentional? To create space/soundscapes?.

RS: I’m not sure what kind of space you mean…cosmic or earthly, or is it aural space within the mix?

I think the idea of ‘space’ in ‘Myopia’ was to open up a bit of mind-space. But space is still space wherever it is… it’s literally anywhere with no matter isn’t it. Actually doesn’t even matter.

I like to listen to drone records by Pauline Oliveros, Phill Niblock and some Terry Riley can be thought to be drone – I think it’s fascinating how you can sink to explore an infinite sonic-space within a 30min droning chord – or even a single modulating tone.

The drone space-chord in ‘Myopia’ is some kind of diluted pop’ized acknowledgement of those ‘proper’ drone works. It’s supposed to form some sort of iridescent timbral crescendo that folds back into itself to create some deserted sonic plateau.

LTW: Following on from that. There is a real ‘soundtrack’ feels to your music. As if it wouldn’t feel out of place in a sci-fi film.

RS: Yes! I did have a sci-fi twitch for quite a while during the recording and mixing process. I’m writing almost everyday so this music stuff naturally twists into a weird unintentional biographical soundtrack, then I step back months later and notice weird references about the ‘powdery grip of blue avians’ or some abstract idea from a dream I almost remember nestled in a working title, or quite often a hidden vocal or synth phrase locked into a sample.

It would be fun to do a soundtrack sometime… Maybe help Randy Newman on tape-echo and theremin duties if there’s ever a Special about Buzzlad Lightears going to Jupiter.

LTW: What are you musical/cultural influences? And how was growing up in your part of Wales?

RS: Growing up in North Wales was really good. I mean, most cultural influences reach everywhere these days both good and bad. You can be out on the moors or up a mountain for a Saturday afternoon and still be back in time to be confused by prime time numbing disguised as culture.

I’m not entirely sure what The culture is now – there’s so much sub-culture that seems to have evolved with social media. I’m just doing my own thing, don’t know what’s happening out there really.

I was lucky to grow up with switched on, or off friends, listening to CAN, Aphex Twin, Fennesz, Slint, Velvet Underground, embraced all things Welsh and any exciting culture from outside Wales too. We’d go to ATP’s, found raves in forests, had our own diy post rock happenings in barns and held our own parties in a tripped out modified static caravan.

Most of my records are in storage since I moved back here to North Wales, so I’ve been going through boxes of CD albums from the late 90’s, like a strange reprise from the future me. Aphex Twin’s Selected Ambient Works, and all Boards Of Canada are just perfect. Also found some Leaf label samplers with Boom Bip & Doseone, and Manitoba tracks that sound really cool. I’ve been listening to a lot of Japanese ambient music, and into Brian Jonestown Massacre at the moment.

RS: I’m not a very well informed person in general,. It is totally deflating that everything has eroded so quickly over the last year. Even though you know and bluntly see that the people who take charge of our lives are acting like childish bullies with very little virtue, and are so far removed from their actual ‘work’.. it’s still shocking to realise it’s true and it’s actually happening Now!?!

But, the shittier the compost the stronger the plant. So there has to be a sprouting yang about to burst out. And art is a great way to express the collective in these kinds of times. It seems the raw and most powerful forms of political expressive art has always been in reflecting or reacting to exactly what’s happening at that moment, I’m not sure if it’s a fertile time for creativity, or if it’s just a funnelling to a narrow channel of no other option because it’s actually one of the only pure forms of communication we have and need.

LTW: This EP, as well as having a lot of space, feels very blissed out. Parts of it wouldn’t be out of place in the clubs in Ibiza. Do you feel that, or am I way off the mark?

RS: I have no idea. It’s a bit too immediate for me to be able to call that. There are blissed out parts, I think some elements of the EP definitely lean towards kosmische trip-hop, maybe some deep house and minimal techno. I don’t really know or like to say. It’s just what it is.

I’ve never been to Ibiza, a blissed out party sounds perfect though and I’d be more than happy to go if someone with some solid Ibiza knowledge thought it a good idea.

LTW:  So after this release, what are your recording plans?

RS: This EP had been hanging around the studio for about a year, and I write or remix or record most days so there is an LP planned for the new year. Most of it has been recorded over the past 9 months and will need mixing and mastering which can take a while.

LTW: And live? Any festival slots booked for 2017?

RS: There are some UK dates booked for January. The Waiting Room in London, and a free entry gig at the Hope and Ruin in Brighton. I don’t think there are festivals booked yet.

What a bloody lovely chap.

R.Seiliog is set to perform at a number of Welsh shows this Autumn and Winter, with more UK shows to be announced shortly for the new year.

Find R.Seiliog on Facebook, Soundcloud and he also tweets as @seiliog.