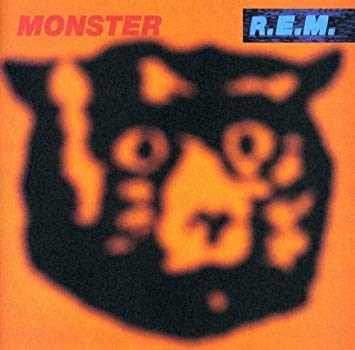 Monster saw R.E.M. devote songs to stalkers, sex and celebrity, while embarking on a worldwide arena tour. Both almost killed them – figuratively and literally. As the album turns twenty-five, Sam Lambeth takes another look at one of their most divisive records.

R.E.M. were feeling restless. Peter Buck, still the punk-trash kid stomping pedals in a suburban garage, was keen to get back out on the road and play to audiences. Similarly, drummer Bill Berry had grown tired of the maudlin-infused meditations on mortality that R.E.M. had become internationally renowned for. Their next album, they decided, would see them throw their flannel-flecked hat into the grunge ring.

By 1994, the Athens four-piece – completed by the enigmatic howl of singer Michael Stipe and nimble multi-instrumentalist Mike Mills – had somehow defined and defied what was commonly referred to as alternative rock. Their previous two albums, Out of Time (1991) and 1992’s Automatic for the People, had propelled them from cult curios to globe-gobbling megastars. Stipe’s brooding burr on loss and alienation had seen them stand shoulder to shoulder with fellow flag-bearers Nirvana and Pearl Jam, despite lacking their gut-thrust guitars and cathartic shriek.

For their ninth album, R.E.M. set two rules – they would tour for the first time since 1988 and their new album would rock. However, Buck would be keen to stress it was “rock in inverted commas”, for Monster does not play to the gallery as much as flashes them an arch eyebrow. The songs obsess with authenticity and artifice, each snarling aside on celebrity status and each perfunctory guitar solo dripping in detached irony.

In the studio, the band recorded in a live setting – upright with monitors – in order to prepare them and create an urgent atmosphere. However, the four-piece bickered frequently. The deaths of River Phoenix and Kurt Cobain, both close friends of Stipe, led to the singer feeling withdrawn and distant. Eventually, after a heated studio shouting match, the band reconciled and committed to working as a unit.

If some of Automatic for the People’s less weighty themes showed a sign of things to come (Drive’s sarcastic existentialism, Monty Got a Raw Deal’s lament on faded Hollywood hope), nothing could prepare fans for Monster’s sound. Peter Buck dominates the record, his glam-thrash distortion casting an overpowering murk across each song like an indelible substance stain. Gone are the reflective jangles of Reckoning and the country-tinged melodies of Automatic. Instead, Monster revels in buzz-saw slices of feedback (Circus Envy), aggressive power chords (Star 69) and bleak distortion (Let Me In). Similarly, Stipe’s voice – hitherto rich and crystalline – has now retreated back to the depths of the recordings, fighting to be heard and often having the distant urgency of a series of frantic voicemails.

Even the moments that mirror some of R.E.M.’s most majestic melodies are warped and tainted. Strange Currencies and Tongue both have the shimmering grace and beautiful melodies that had defined the band up to this point, but are sandwiched in the middle of the record and bathed in the sizzle of amp feedback, bruised guitar chords and abrasive fuzz. Strange Currencies’ initial contemplative arpeggio has the same gravitas and lift of Everybody Hurts, but Stipe’s lyrics – “these words, you will be mine…all the time” and “I need a second chance, a third chance, a fourth chance” – create the mood of a desperate and unrelenting lover as opposed to a message of universal hope.

The bossa nova beat and lilting falsetto of Tongue is R.E.M. at its most soulful, Mills’ scorched organ interlocking wonderfully with the steady beat of Berry and pulsating bass. “You want a room with a fire escape, I want to tell you how much I hate this,” laments Stipe with soaring beauty over Berry’s backing, creating a truly beautiful representation of considerably ugly situations.

But ugliness defines Monster. King of Comedy still sounds like a giant misstep, but it’s a necessary part of the record’s journey. A churning, stiff keyboard beat backs Stipe’s metallic rejection of popular culture, sincerely stating “I’m not commodity” among other truisms that recall the fellow fast food culture crunch of U2’s Achtung Baby. I Took Your Name is a furious, glam-fed rocker on identity hijacking where Stipe cries “I don’t want to be Iggy Pop, but if that’s what it takes.” The punk playfulness of Pop struts through Crush With Eyeliner, a wry tale of desperation and wanting as Stipe, with searing irony, claims “I’m the real thing”, backed by the practiced anomie of Sonic Youth’s Thurston Moore. The emotional detachment and arch cynicism also rears its head on lead single What’s the Frequency, Kenneth?, where Stipe cribs from Slacker to cry “Richard said withdrawal and disgust is not the same as apathy.”

It’s the more sombre, quieter moments among the six-string fury that fully articulate the dark underbelly of Monster. I Don’t Sleep, I Dream negates human connection as Stipe fumbles “do I give good head? Am I good in bed? I don’t know, I guess so”. Bang and Blame is drenched in a fragmented guitar jangle as Stipe sighs “if you could see yourself now baby, the tables have turned.” Each song’s protagonist has the cloying self-importance and unrepentant entitlement of a Bret Easton Ellis anti-hero.

The truly stunning moments belong in the tar-black reflections of Let Me In. The song serves as a direct response to the suicide of Kurt Cobain and uses his Jagstang, now bequeathed to Buck, in its recording. Bleakly bare, with icy fuzz smothering Stipe’s wounded baritone, it remains one of R.E.M.’s finest, most staggering pieces of work.

Monster’s accompanying 1995 tour helped place R.E.M. among the pantheon of worldwide rock royalty, but it was beset with problems. A bowel concern plagued Mills while Stipe succumbed to a hernia. Both paled in comparison to Berry’s onstage brain aneurysm, which left the drummer inches away from death. The album itself received warm reviews, but it would begin an irreversible commercial decline for the band that not even more approachable albums could reverse.

Beneath the manicured arrangements, interweaving of strings and flourish of mandolin was always a hulking, menacing rock band. Monster showcased R.E.M.’s genius through the grubbiness of celebrity, the quest for true identity and the loss of communication. It remains as relevant, and riveting, in 2019 as it did upon its release twenty-five years ago.