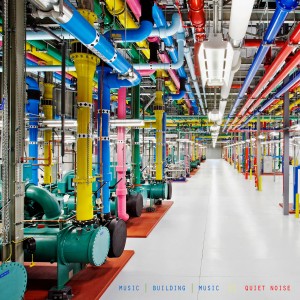 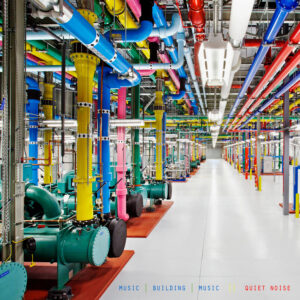 Adam Wilkinson has been busy making an album about being busy. It’s one of those gems that deserves wider recognition, and, if the interest attained by his last album ‘Audible Life’ (see review here) is anything to go by then it’s just around the corner.

Under the name of Quiet Noise, Wilkinson has created an album of uncomplicated but interesting rhythms and arrangements which are both delightful and stimulating. His work as a sound engineer and composer of soundtracks for nature documentaries and short films has served him well as his ability to construct increasingly entertaining and almost living pieces evident for all to see.

Using the format of a day at a workplace, ‘Music | Building | Music’ takes the trip to the place of employment and then skilfully takes in several moments throughout the day before the return back home.

Album opener ‘The Scenic Route’ starts the metaphorical drive for success as the start to another laborious day begins. Throughout the shift, intermittent percussion and machinery sounds add to the effect of the album an almost begin to tell the story without the use of words (bar the occasional shout from a work colleague).

Along the way, we are treated to quiet, noise, (sic) uniformity and disorganisation as the album treks from one track to the next. ‘Need A Minute’ is nothing short of delightful as it slowly rises and the continual use of broken beats and slightly staggered effects makes the album one of noteworthiness.

‘The Final Hour’ sees a last push to increase productivity and achieve the day’s targets before the sounds of pistons and air valves slowly gives way to human voices and the workers begin to wind down for the day before machines are turned off and left to run down.

Album closer, ‘I Earned This’ sees the writer having time to relax maybe over a glass of beer or an hour in front of the television before the events of the day are noisily washed out of the system in readiness for the time of slumber.

It’s a thought-provoking album and one which holds much credence to Wilkinson over ten tracks of well-thought out, well executed musicality.

The Quiet Noise can be found online here: quietnoisemusic.com.