Home Music Bands The Quickening Pace of The Slow Readers Club: Watch out 2016 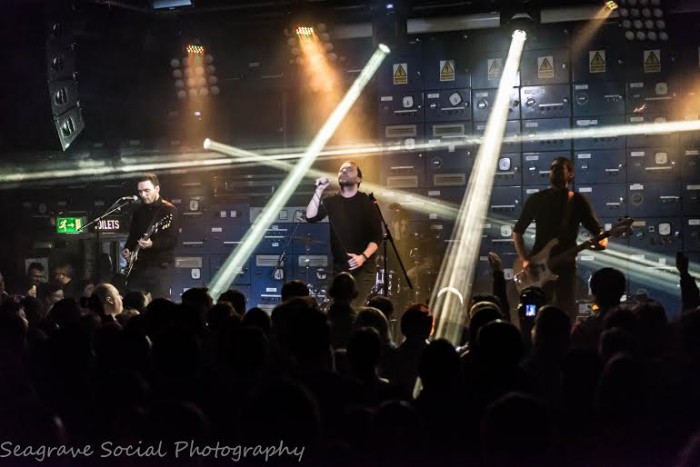 They are a band you instantly want to relate to. Perhaps it’s the enigmatic name ‘The Slow Readers Club’ like a homage to those childhood hours spent struggling over the latest boring book. Perhaps it’s because they are far from boring in themselves; a four-piece band from Manchester bringing Indie-electronica up-to-date. They produce music which matters; powerful rhythms as well as emotive lyrics. It’s music with a melancholy you can move to, dance whilst lyrics touch on themes of depression, break-ups, regret, anger. Defined by bold bass, synths and strings along with cutting guitar, their sound considers emotion yet is catchy with it. And it seems the The Slow Readers Club is fast making headlines, with sell-out shows closing 2015 and big things set for 2016. The last half of the year saw them packing out venues such as Gorilla in Manchester, getting the crowds fired-up for a fantastic night to remember.

Dance to some indie music with depth

The Slow Readers Club is made up of Aaron Starkie (vocals / Keyboard) Kurtis Starkie (Vocals / Guitar) James Ryan (Bass) and David Whitworth (Drums). The feature of two brothers is obviously going to draw some comparison to Oasis; but The Slow Readers Club are important because although they appreciate the Manchester music scene, they don’t try and ‘emulate’ what has gone before. This is a group which doesn’t try too hard – the electronic element is quirky without being a copy to Factory Records, the lyrics often emotional and brooding, but certainly not a steal from The Smiths. Yes, ‘Madchester’ is over too, but the Slow Readers Club celebrate a movement of their own; interesting, introspective Indie electro. Many of the songs are reflective in tone, taking enigmatic songwriting in-hand with addictive basslines. You can think and feel the rhythms. Their 2015 album Cavalcade confirms this.

‘Cavalcade’ is a term used to describe a horseback parade where the focus is on participation rather than appearance – and it’s this sense of audience involvement which is not just promoted by the album, but by the band in general. This is what I mean by their music not trying too hard; listeners are invited to do what they like with it – sing, dance, just sit and listen. The melodies are clear and opened to your interpretation. The album opens to the confident vocals and deliciously layered guitars of, ‘Start Again’ followed by the already popular track ‘I Saw a Ghost’. There is also excitement to be had with what has proven to be a popular piece, released as a single on 20 November: ‘Plant The Seed’. It is a track which blossoms on listening; with a zingy electro quality it’s hard not to find catchy. Starkie’s high-pitched tones add an almost haunting quality over the atmospheric electronics and chant-like chorus – ‘We’ve only got to plant the seed’. Clearly considering audience again, Slow Reader’s Club throw in plenty of interest. This includes their new music video for the track – the bodies of ballerinas taking on the life, decay and regrowth of nature.

Get to a gig

They also invite audience engagement through touring too, performing in the North especially – paying homage to their musical roots without replicating them. In the age where there is so much industry pressure to build an ‘online presence’, the band ensure they don’t ignore real world. Reading was most probably slowed in the Central Library when the band first took there to record in 2014; as if determined to pull the public away from books of the past and into the music of the future – coming away with the album ‘Live at the Central Library’. It is here they appear to develop on their heartfelt, melodic vocals; provided largely by the Starkie brothers. Plus nothing sends a message as inviting as recording in a library; music, in a public place, for the people. Yes, it’s the personalism of this band which makes you want to go out and meet them. To experience the emotion with them.

It’s clear this band cares about music for the people rather than the cash; they’ve held gigs at gloriously intimate venues such as The Ferret in Preston, just before Christmas. And this has seemed like a recipe for success so far, with ever-growing audiences and potentially big things for the future. I was fortunate enough to speak to the lead vocalist Aaron Starkie:

2015 has been a big year for you with the release of your album and lots of gigs! What has been the highlight ?

Wow, there have been loads, but our sold out gig at Gorilla in Manchester would have to top the list. We were really blown away to hear everyone singing the tunes back, it felt like a really special gig and made us believe anything is possible in 2016!

Would you say Manchester is important to you and why? Do you feel part of a ‘scene’ ?

Manchester is an important city musically and culturally it has given the world so many great bands. That is both a blessing and a curse. There are a lot of great bands coming through in Manchester but it’s quite varied; from psychedelia to electronic to traditional guitar bands. I don’t think there is one sound that unifies it as a ‘scene’. Then again I’m not sure that was the case with ‘Manchester’ either, I guess scenes are often about fashion and drugs as much as the music I suppose.

We will be touring the UK again, looking at doing more festivals – we did Isle Of Wight, Tramlines and Ramsbottom this year (2015). We will be looking to build on that. We are talking to people about European dates too. Oh and there is the small matter of writing album 3!

They might be slow by name but certainly not by nature. This is a band to watch out for in 2016!

You can find The Slow Readers Club online here: https://www.theslowreadersclub.co.uk/. They’re also on Facebook and Twitter, as @slowreadersclub