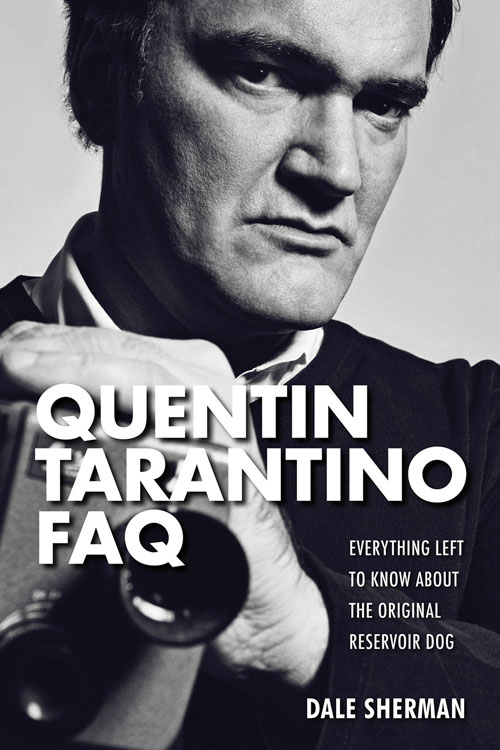 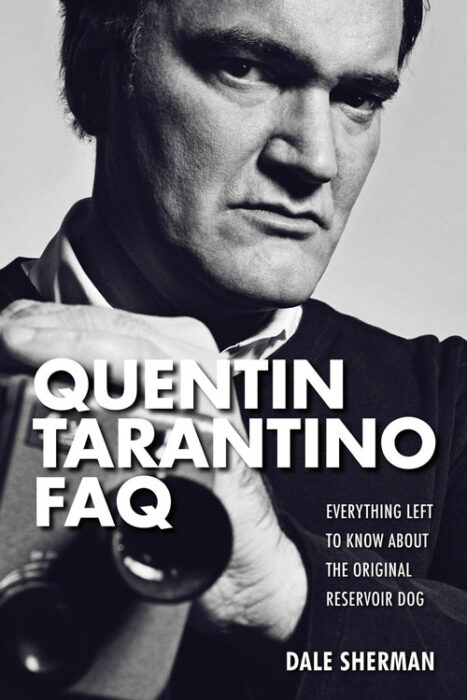 Quentin Tarantino divides opinions more than any other director of recent times and is therefore a natural subject for books. Louder Than War’s Jamie Havlin has just read the latest of these – here are his thoughts.

There’s a scene in the ‘Vincent Vega and Marsellus Wallace’s Wife’ section of Pulp Fiction where Vincent, played by John Travolta, goes round to score some drugs from his dealer buddy Lance. Before getting his hands on some particularly potent heroin, Vincent overhears a conversation between Lance’s wife Jody and a friend where Jody discusses the whereabouts of her seventeen piercings and her fascination with needles.

This might seem a wee bit inconsequential and, in terms of the film’s story arc, it isn’t that crucial but – and I won’t be the first to point this out – it does cleverly foreshadow a scene later on where Mia, played by Uma Thurman, overdoses on some of Vincent’s heroin and requires a shot of adrenaline to her heart to revive her.

I saw the film in my local cinema on its release and Vincent preparing to pierce the adrenaline shot through Mia’s breastplate had the packed audience utterly riveted. People were squirming in their seats, some couldn’t even bear to look and drew a hand over their eyes, there was plenty of nervous laughter too and, after a dramatic pause, when Vincent prepares to plunge the needle in a stabbing motion towards a red dot he has marked on Mia’s heart, there were a few near hysterical screams.

Not that we saw the actual entry of the syringe, instead we are shown the comatose and foaming at the mouth Mia instantly spring back to the land of the living and the reactions of Vincent, Lance, a very impressed Jody, and her pal.

The film is an electrifying tour de force of modern cinema, blending brutal violence with comedy, pulp inspired lowbrow culture packaged as high concept drama, and with instantly quotable dialogue as sharp as the frantic guitar lines of Dick Dale’s Misirlou, the song that accompanies its opening credits.

As Dale Sherman notes in Quentin Tarantino FAQ, for a time after his bravura debut Reservoir Dogs had first burst on to the big screen, some critics suspected the wunderkind might just be another one hit wonder but as I watched Pulp Fiction that night it was clear that Quentin Jerome Tarantino’s second film was even bolder and more cinematic than his debut.

All these years later, he’s still one of the most controversial, most talked about and one of the most talented directors around and Quentin Tarantino FAQ examines just about everything that you could possibly wish to know about the man and his movies.

There are insightful biographical details from his early life including the time when he famously worked in a video rental store in a chapter titled Ten Essential Moments in Tarantino History.

Other themed chapters examine the movies that most influenced him; awards won; the response of critics; his parallel acting career; forays into television and his work as a script doctor in Hollywood juicing up the scripts of others. There’s also discussions on the best Tarantino parodies and homages; merchandise and much, much more. My own favourite being Of Locks, Saints, and Smoking Aces that covers some of the imitations spawned by his unique filmmaking style –  that’ll be Lock, Stock and Two Smoking Barrels, The Boondock Saints and, of course, Smoking Aces for starters.

Additionally, and less interesting for this reader, each of his films is analysed in forensic detail including production minutiae, profiles of all the main actors involved, a sequential plot summary, backend information and comparison between the film and the published screenplay and these chapters might be best appreciated if readers dipped into them after viewing the relevant film on DVD or Blu-ray.

At times the book does veer towards the trainspotterish but I’m sure there are those hardcore fans out there keen to know which of his films feature the fictional brand of Red Apple cigarettes or discover the likeliest ingredients of another fictional brand, the Big Kahuna Burger.

Dale Sherman has previously written books on Alice Cooper and Kiss, two acts he clearly adores and now he’s tackled a film director that he is also plainly in awe of, though not scared to occasionally criticize. His research has obviously been painstaking – if he appeared on Mastermind with Tarantino as his specialist subject you just know he would be unbeatable.

His writing style is very accessible too with a neat turn of phrase every few pages: for instance, his description of Uma Thurman newly recovered from her OD as looking ‘like a drowned rat’ is surprisingly accurate.

How much you either like or dislike this book will likely be in direct proportion to how much you like/dislike Tarantino, so, as you probably guessed from my opening paragraphs, I’m a fan (though not a fanboy – honestly!) and was pretty much engrossed throughout large chunks of the book.

If you’re in the Tarantino is all about style over substance camp, then I doubt Sherman’s book will convince you otherwise, although you would still learn a lot about the often complicated business of film making by reading it.

Quentin Tarantino FAQ is published by Applause Theatre Book Publishers on 26 March 2015. For more on the book click here and for Dale Sherman’s blog, click here.

All words by Jamie Havlin. More writing by Jamie can be found at his Louder Than War author’s archive. You can also find Jamie on Twitter as @MalcontentsOnly .