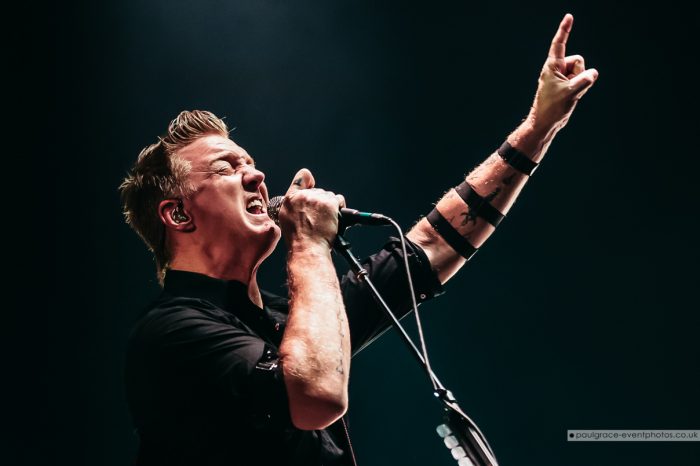 Queens Of The Stone Age

With their slick back hair and cowboy swagger, Queens of the Stone Age brought their Villains show to London O2 Arena and wowed 20,000 fans with a performance that confirms their status as one of the world’s top rock bands. Paul Grace reported for Louder Than War.

This summer Queens of the Stone Age released their seventh studio album and announced a world tour that will last until way into the summer of next year. The album, Villains, was produced by pop maestro Mark Ronson and received fantastic reviews.

So tonight the Villains tour rolls into the O2 Arena for the Queens’ second London show following a Wembley date a few days earlier.

Support comes in the shape of US speed rockers Broncho who play an adrenaline fuelled set and do a top job of getting the fans ready for the headline act.

The Queens’ chosen intro tune is disco classic Walk The Night by Skatt Brothers. A very fitting track as the five Queens saunter onto stage dripping in so much testosterone it verges on comedy macho. Vocalist Josh Homme asks us if we’re ready to party “because, hell, it’s Saturday night, right!” (it’s actually Tuesday but we see what he’s doing), and they launch into to If I Had A Tail from 2013’s …Like Clockwork. With its driving percussion, singalong chorus and huge geetar riffs it’s a solid start.

The stage set is comprised of multiple 10 foot tall bendy UV strips that the Queens frequently and comically bump into, and like all arena shows these days, there are huge video screens on either side of the stage reminding those at the back of 20,000 sell out crowd who they’ve paid to come and see. 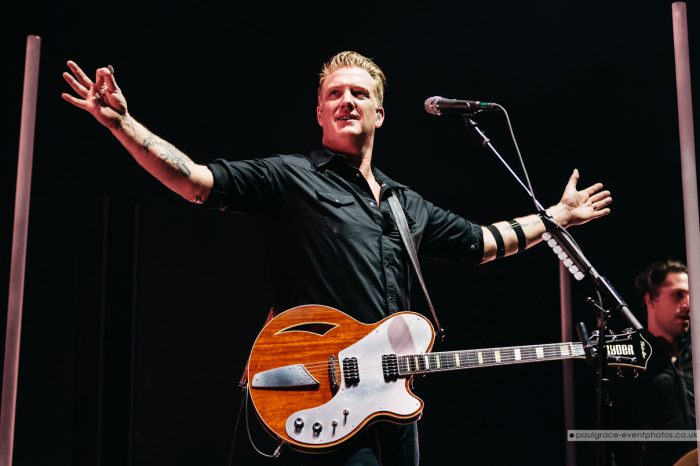 The Queens play a selection of songs from their entire back catalogue with the majority from Villains plus previous album …Like Clockwork. Homme is the ultimate king of parody rock and between tracks regularly tells us all to be more “present and in the here and now”.

It takes a wee while perhaps to win the crowd over but the screams at the start of the rockabilly-esque The Way You Used To Do indicate the fans are definitely becoming more “present”, and during what’s probably their biggest tune, No One Knows, the atmosphere approaches fever pitch.

The Evil Has Landed is fast, furious and blooming marvellous while Make It Wit Chu is sexy, melodic and really shows off Homme’s smooth vocal tones. The show draws to an explosive close with classic Go With The Flow only for the band to reappear for a two track encore finishing off with a dark and moody A Song For The Dead featuring a lengthy drum interlude.

An awesome show which goes to reaffirm Queens of the Stone Age’s status as a true global arena rock band.