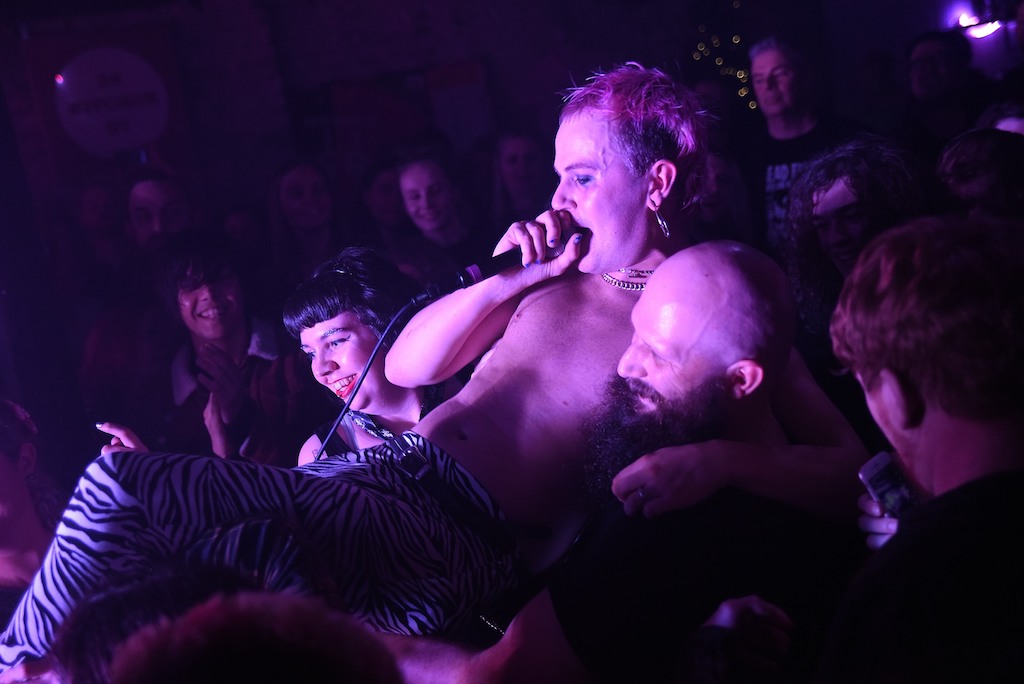 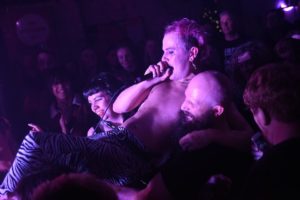 Queen Zee next Manchester gig will be at the Ritz on Saturday June 8th with Membranes, Henge, Go-Cart Mozart and Glove. All details here.

There is always something wonderful about watching a band on the cusp of great things. Especially a band who are making up their own rules and are in a rush to be themselves. It’s that moment when the underground chit chat, the website rave reviews, the vibrant Facebook comments, the intense whispering, comes, quite literally, to a shuddering climax.

In the past year a whole rush of bands have been clambering out of the underground, where at one time, they would have been trapped and into the gig league. IDLES, The Lovely Eggs, Sleaford Mods, Fat White Family blah blah blah here they come – all fantastic misfits picking their way through the wreckage of modern culture and creating yet another avenue, another new future.

Queen Zee are on the cusp, and they are the most colourful, and most beautifully unlikely. The band emerged in Liverpool’s vibrant local scene as the misfits misfits – a million miles away from the Beatles industry or the ever productive hipster DIY scene.

With their love of the freakier end of metal and Marilyn Manson’s genius dark beauty and their natural aptitude for snotty, off kilter, pink punkish rushes they were embraced by the city’s hardcore and punk scenes frequented by Zee’s father before being springboarded onto the national scene by Cabbage who took them under their wing for a big UK tour that served notice on just how damn catchy those songs were and how alive their whole thing really was.

Tonight’s sold out show at Manchester’s YES is a masterclass in being young, vibrant and loud, and a reminder of the sassiness that was at the heart of original punk but now served through a 21st century culture rush to make it very much of the now. Their just released debut album has served notice, Iggy Pop is purring and the radio is playing, and it makes Queen Zee the latest in this seemingly endless queue of great young British talent who are about to make a difference.

Birkenhead’s Queen Zee are fantastically loud, vibrant and alive and come armed with a wild sense of humour and a serious undertow of LGBT anthems that are for everyone. They are beautiful aliens that combines a buzzsaw thrilling glam punk and a multi sexual agenda. They are a colourful orgasm of glam punk, transgender-fronted, hedonistic fun. They deliver all this with a DIY wardrobe, restless energy and anthemic songs that rush along their melodic chassis and are built for perfect crowd participation. They are the homespun descendants of every made up colourful droog who ever felt out of place in every suburb from David Bowie to Marilyn Manson to the wonderful Pete Burns, to long lost glam punk droogs like Rachel Stamp or the breathless fuck punk of Placebo or a Jon Waters film season cum to life or Faerground Accidents if that band had ever toured enough – and yet they very much have their own agenda and their own space and have somehow managed to emerge blinking in 2019 as the band most likely to and that’s a great feeling.

This is pop as a high octane rush of guitars, caustic tunes and great lyrics that scold with wit and truth and a beautiful poetry like on the satan embracing sex rush of Lucy Fur or with their ultimate anthem ‘I Hate Your New Boyfriend’ filling the room with its ever enveloping avalanche of guitars and an almost terrace anthem – that’s if football terraces are made up of polymorphous boys with perfect make up. No wonder arch Stooge Iggy Pop likes them and their debut album is all over the radio and grabbing great reviews faster than they can post them up on their facebook page.

A lot of touring has made them into an awesome live unit and they pack a real power to these fizzing songs and Zee is a brilliant focal point full of all the totemic energy of a real star, conducting the freak energy and sassy-strutting the stage as she creates a circle pit so everyone can disco dance rather than run around in a circle as they slyly subvert the usual gig manifesto to create a whole new wonderful.

The late and great Pete Burns – that wonderful creation of Liverpool’s late seventies underground will be cheering on his cultural descendants. They have his sass and acidic humour in their DNA and his no hold barred approach to life and music and that same flesh/flash of colour against the monochrome that makes him and them fascinating fantastic creatures.

The Queen is certainly not dead.