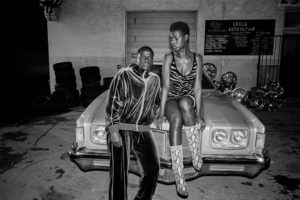 Release date: Out at HOME, Manchester and on general release 31st January

In the midst of rural America, two innocent individuals become icons within their community. Jonathan Bradshaw tags along for the ride amidst the political and racial upheaval that follows.

We’ve seen narratives like this before: the black community become persecuted and then one or two individuals rise up to halt said persecution. The difference with this film is the audience go on a journey with the two characters and they are kept in the dark every step of the way.

Our two striking leads – Ernest ‘Slim’ Hines (Daniel Kaluuya) and Angela ‘Queen’ Johnson (Jodie Turner-Smith) – are on an innocent tinder date when we meet them. We can see that they don’t normally do this. On the drive home afterwards, a cop pulls them over and so begins the rollercoaster narrative.

One way that this film subverts expectation derives from the two central characters. Kaluuya and Turner-Smith have great chemistry and their reaction to the crisis feels organic and free of cliché. They’re a reflection of what normal people do in extraordinary situations.

Standing with the two leads, a myriad of supporting characters pop up throughout the film. Bokeem Woodbine provokes as Uncle Earl, whose questionable lifestyle provides some aid to the “black Bonnie & Clyde”. Elsewhere, the musician Flea and Chloë Sevigny appear as a sympathetic white couple, showcasing the film’s diversity and not just focusing on one ethnicity.

“Power to the people”

Community is a strong theme that forms an important crux in the film. Queen & Slim rely on a variety of people in their cross-country crusade to keep one step ahead of the law. In the process the black community propel the pair to icon status. Just as, brilliantly, we see how the pair don’t see themselves as heroes, the film also refrains from forcing an ideology upon the audience. 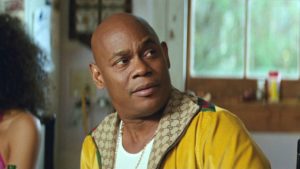 With stunning cinematography Queen & Slim brings to life rural America as the couple visit many locales from quiet towns to sunny beaches. The film acts as a window for us to see into this world and given that the scenes are set in normal, everyday locations, the film itself becomes more relatable to the audience. The cinematography also emphasises the free-spirited nature of the protagonists.

It’s a good thing that the trailer gives nothing away about the film. Go into this blind and you’ll have a fantastic ride that will keep you guessing at every turn.