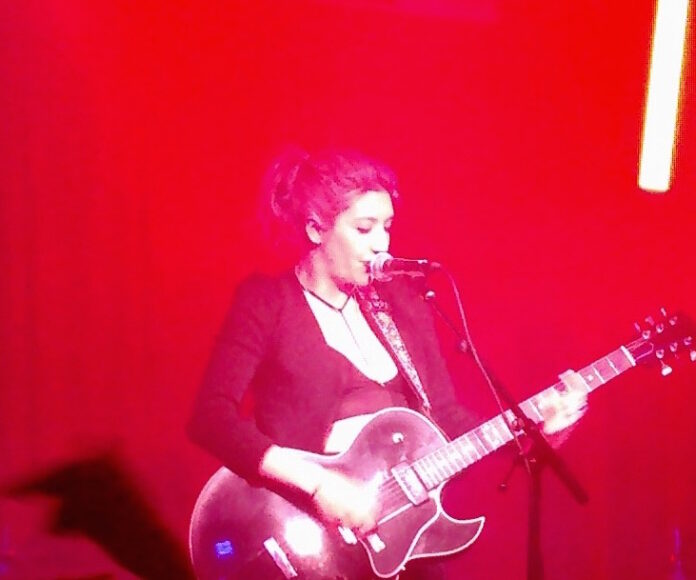 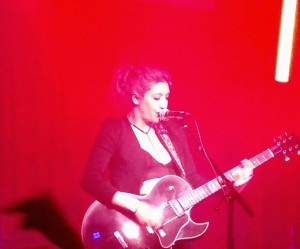 Carré Callaway, otherwise known as Queen Kwong, takes on London in a four day residency. Louder Than War’s Christopher Lloyd was there.

When an acquaintance points me in the direction of a band they think I’ll like, I’m generally cautious, as history has proven that this method of discovering bands doesn’t quite work for me. So it was with great trepidation that I approached the ‘Bad Lieutenant’ EP by Queen Kwong.

Queen Kwong is the creation of Carré Callaway, who since 2009 has been playing gigs primarily in LA, with an ever-evolving line-up. The EP was good enough to move me to travel down to London to check out one of their four night residency gigs, announced as ‘Queen Kwong Vs. London’.

The band fire up as Carré works her way through the audience to the stage, oozing a combination of menace and sure-fire confidence, The set comprises of material taken primarily from the upcoming debut album, and is a perfect mix of eerie disturbing swathes of raw psychedelic guitar, enveloping an absolutely killer rhythm section. Queen Kwong creates a dirty, sleazy heavy sound that make you feel like you’re standing right in the middle of a David Lynch Film.

As the set rages on, Carré proves herself to be the kind of frontperson that is sadly lacking in today’s overtly bland live scene, intimidating, bold, striking… you can’t take her eyes off her. The audience are enraptured moths to her glowing flame. Such is the mesmerising power of the frontperson that the band, who feature luminaries such as Wes Borland and Fred Sablan (formerly of Limp Bizkit / Marilyn Manson respectively), are barely glanced at. No-one bats an eyelid, not due to the ‘Hoxton Hipster‘ coolness you may expect, but from the sheer weight of the music that they are creating and Carré’s stage presence that makes this gig a total victory for the band.

Queen Kwong can be found online here: queenkwong.com. She’s also on Facebook and tweets as @QueenKwong.