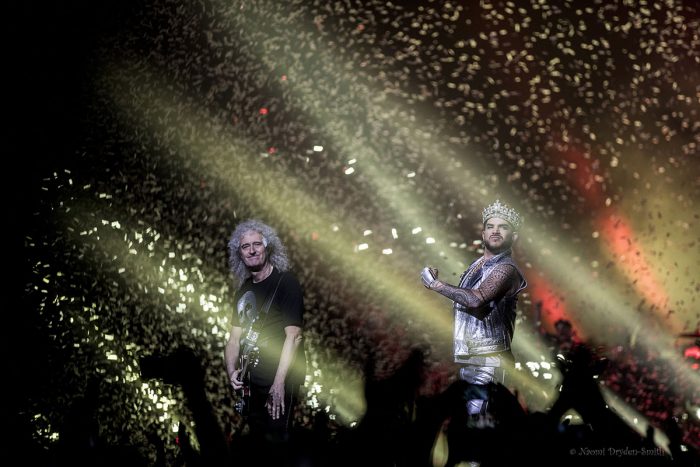 Nearing the end of their long 2017 tour of North America and Europe, Naomi Dryden-Smith caught Queen + Adam Lambert’s stunning penultimate show at Wembley Arena in London, a real pre-Christmas treat for anyone who loves Queen’s music

“He’s no Freddie, this American motherf*cker”. Adam Lambert addresses his critics head-on with humour and an appealing level of self-effacement. The thing is, as Brian May spells out later, the band really wouldn’t be here to do these shows if it wasn’t for Lambert. And there are enough true fans packing out this third of three sold-out London arena shows to demonstrate that they must be doing something right. Lambert underlines his point “I’m a fan just like you, I’m just up here in the gayest suit you’ve ever seen…”

I first saw Queen at the age of 15 – it was the legendary Magic tour in 1986, Freddie’s last with Queen and, despite being a fledgling goth resolute in my disparagement of anything shiny or yellow, I’ll never forget that show – nor the sheer power of Freddie. I was lucky enough to meet him afterwards at the after-show party at Kensington Roof Gardens – incredibly, he seemed as shy as I was, hard to reconcile with the man I’d just seen dominating Wembley Stadium. I know as well as anyone that he’s irreplaceable.

However, it is now over 30 years since those last shows. The band’s urge to keep playing the music has long been clear – years of collaboration with Free’s Paul Rodgers proved that, but somehow never quite satisfied. But in Lambert, they really have found something special – someone with a superb voice who is able to replicate some of Freddie’s flamboyant showman-campness without stealing the show for himself – both times I’ve seen him I’ve been struck by the respect he clearly feels. So when he comes on towards the end in a crown and gold cape, it brings Freddie to mind in a positive tribute rather than taking anything from him. 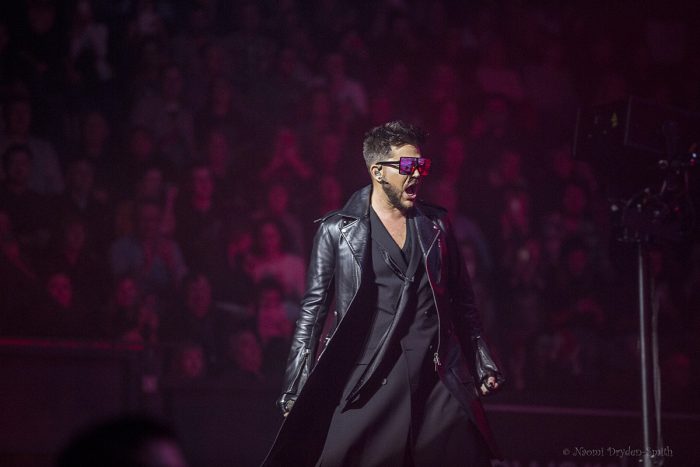 Queen promised an amazing light show and are true to their word. Queen’s opening numbers are always legendary – at the O2 in early 2015 it was a spine-tingling One Vision with that amazing synth intro filling the place with a wall of sound. This time it’s a short burst of We Will Rock You fading into Hammer To Fall, with a massive animation of Frank the Robot from the album cover of News Of The World, 40 years old this year, breaking through a wall and peering in at us – quite unsettling. Frank’s a recurrent theme, later clapping along to Radio Gaga, and a solid version of his giant head later emerges through the floor with Adam Lambert draped over it. There are rainbow lasers, dramatic silhouettes, a stunning Brian guitar solo standing high in a platform against a backdrop of stars and planets and deep blue lasers, and superb animations of the It’s A Kind Of Magic cartoons that seem to bounce around in the air. All of this backing a relentless bombardment of Queen hits, May and Roger Taylor sounding as good as they ever have – most memorable moments include: Fat Bottomed Girls with Lambert riding a pretty pink bike; Love Of My Life, May’s traditional acoustic duet with an on-screen Freddie, tonight sung almost entirely by the audience as May has lost his voice – very moving; and a stunning performance of Who Wants To Live Forever, so intense and dramatic in both light and sound that my eyes leak all over the place with zero dignity. I’m sure others are the same. 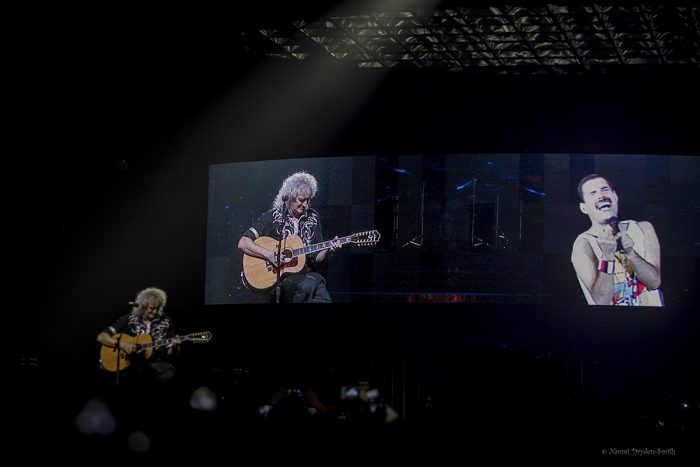 Freddie is gone, but he is still very much here in spirit – whether on screen or reflected in Lambert’s camp showbiz, numerous costume changes and posturing. (Incidentally, Killers appear to have learnt quite a lot from Queen.) He will never be replaced – his musicianship and charisma were unique and essential to the essence of Queen. But as Freddie told their manager Jim Beach just days before he died: “ You can do whatever you like with my image, my music, remix it, re-release it, whatever… just never make me boring.” They have his permission and tonight there’s no doubt that his wishes are being honoured respectfully, and with love.

Queen + Adam Lambert are due to tour New Zealand and Australia in February and March 2018. You can keep up to date with them on Twitter, Facebook and their official website