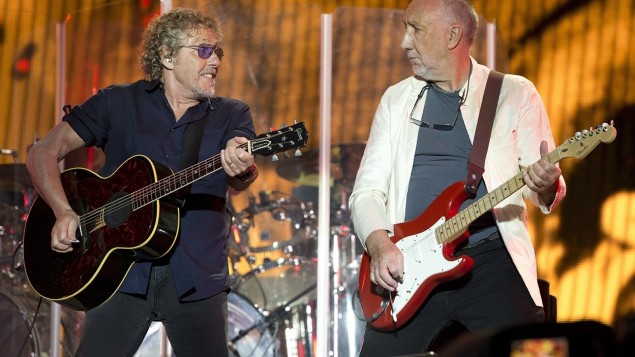 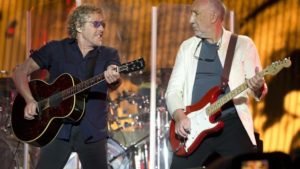 1. To be honest shouldn’t this be the twilight of the gods?
On a walk muggy evening in beautiful Quebec City, where everyone speaks old French and the gothic architecture makes the place feel like no other on the American continent, I’m in an enormous stadium that is packed to the rafters. It’s like one of those impossible concert photos you see from the seventies with an endless crowd and Led Zep or The Who playing rock at the pinnacle period of pop culture when high voltage guitar ruled the planet. And yet even this deep into their career The Who deliver a powerful and potent rock music that explores all the possible nooks and crevices and emotional power of the music in a breath taking display of all its possibilities as they perform a set of classics from all over their vast catalogue with only a much missing late period album that could deal with the last chapter and the end game missing from their catalogue and live show. If anyone could write a great record about the insecurities of ageing and make them poignant yet killer anthems it would be Pete Townsend.

2. Somehow The Who emerged from the smoke filled, claustrophobic small clubs of post beat boom U.K. And caught the mod wave with Townsend’s succinct and beautifully insecure and enraged teenage anthems that somehow translated to the big American stage. When they properly connected at the end of the sixties with the Wild West, their expansive musicianship and daring to go one further and ten times louder connected with the North American youth and they became entwined with the big stadium shift of the time. Punk derided this culture and it does feel alien to stand in such a sprawling space where the people at the back of the field look like tiny distant dots but there is a warm camaraderie here and a lack of bullshit that adds to the sense of occasion – a rock show that feels like a night at the opera.

3.Those days of the high decibel gods are, of course, fading but no-one seems to have told The Who, a band whose intermittent end of days long tail seems to have lasted for ever. They have become so omnipresent that they are almost invisible and yet their magnetic power of draw is still mighty. As you watch Daltry and Townsend shuffle onto the stage, you become aware that they are the architects, the builders of rock from the vamping and amping up of the guitar into the huge PA stack buster that defined the culture for so long to Daltry with his swinging mic and frontman bravado. It’s a mighty long way down rock n roll but The Who are still out there and this is the first date of a huge North American tour of sold out stadia.

3. There is something magnificent about Pete Townsend and his guitar paying. The crystal clear sound tonight lets you hear every nuance and every detail that is far removed from the bludgeon riffolo of what rock would mutate into. His rhythm playing is stunning – tight scratches and chops and that Strat scraping the inside of your skull with that rattling sound – one of the great signature sounds in rock music. He adds hammer ons, feedback and a whole box of tricks that are closer to free jazz or prime time Jimi Hendrix – with that same sort of ability to let the electricity seem to pour out of him like a conduit for the electric voodoo and raging internal emotional seas.

4. The set list is a trawl through the back pages, My Generation is dusted off early, Won’t get Fooled Again is enormous and anthemic and perhaps inadvertently makes a nice comment about Trump-ton just down the road from here. There are whole chunks of Tommy and Quadrophenia where the band get to stretch out and show their musical skills – this is an ambitious music. Zak Starkey is far more than just a great replacement for Keith Moon – he replicates those avalanche drum skills and tackles the later period stuff with power and insane energy – if the Stone Roses ever needed another drummer he would have been their man – as the closest drummer I can think of in terms of tackling the Moon legacy is the astonishing Reni who Pete Townshend once approached to drum for him in 1984
5. In 2017 The Who are a tight knit family – literally – Daltry and Townsend are like two old gunslingers and their mutual respect is the core of the band. You can sense Daltry’s awe at his guitar brother’s musical skill and Townsend seems happy to hide just behind his frontman who even into his seventies and stiffening up can still dominate a stage with the kind of moves he patented decades ago. On the other guitar is Simon Townsend who locks in tight with his brother and lets not forget that Zak was taught to play drums by Keith Moon – a close mate of his father Ringo, who is also, for our money, one of the great drummers. It’s great when you see Zak’s head briefly appear from the maelstrom and his sweat covered face looks like Ringo caught in a hurricane.

6. Monolithic behemoth.
There is something about these older bands. They were there at the beginning of this game and have weathered the whole damn lot – the rise and fall of sixties optimism, the cynicism of the seventies, punk, the bloated eighties and yet marched on doing what they know. Watching The Who now is like watching some kind of high decibel opera with all the drama that entails, the highs and lows and the emotional ride through rock music stretched taut and tight to its ultimate best. You look to the stage and you know the masters are up there.

7. It’s always been amazing how Daltry has played out the part of boxer style frontman and yet delivers those lyrics of sensitivity and confusion so perfectly. It’s always been one of rock’s great conundrums and yet there he is 50 years in and still working out Pete’s demons with his bruised working class voice. The Who are so British with that tough exterior and that smouldering emotional core- that’s what this music was invented for – the perfect vehicle for enraged young men to articulate their anger and their art. Trashing those guitars decades ago looked great and was an art from but was also deeply felt. Of course The Who don’t trash stuff now and the anger may have rescinded but there is a glowing and brilliant awkwardness about Pete Townsend and every now and then he does that fantastic arm windmill thing to great cheers that is pure energy and volcanic emotion articulated.
8. And still the guitar his great…I’m mesmerised yet again. His playing is so economical and so powerful, if only the next generations has really listened to what he does. That rhythm playing is like nothing else.

9. The Who also knew how to do pop. The pure pop magic of those melodic like ‘I don’t mind if that guy is dancing with my girl’ – a moment that articulates both the melodic and heartfelt power of pop classic and Pinball Wizard is a perfect example of dynamic and anthemic rush.

10. They may created the template for rock and punk but their musical ambition was enormous and as the Quadrophenia and Tommy sections in the set prove they truly stand the test of time. The prog elements sound fantastic and the virtuoso playing mesmerises the audience yet again. It maybe have become an eternal rite of passage to see the Who every few years over here but the generations that pack the venue waving their union jacks and glowing with love leave at the end of the show saying this is the best they have ever seen the band and considering the history on display up there that is quite something.