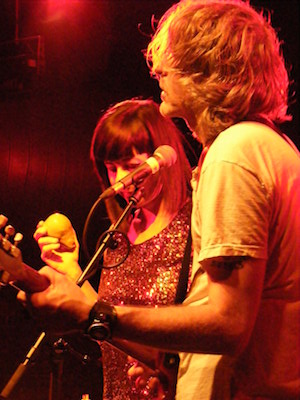 Willow Colios rounded off a great year of gigs with Quasi at London nightclub Cargo. (See also our photo review of this show here.)

2013 saw some seriously good gigs but there’s an inauspicious start to what turns out to be one of my gigs of the year as Sam Coomes’ keyboard is deprived of electricity about 90 seconds into opening number Fat Fanny Land. Is this the curse of Friday the 13th or the fact that for Quasi, as drummer Janet Weiss alludes, London gigs always seem to come with these slices of misfortune?

The temporary power failure does give us the first taste of the interplay between these two former husband and wife band mates of twenty years. Not for the only time tonight they debate where best to restart the song from, settling on a particular drum fill. It’s the charm of this duo that shines through. They visibly love playing together and are enjoying the receptive audience too, in contrast to a support slot at London’s Shepherds Bush Empire a few days previously at which they played to “2,000 people who didn’t give a shit”.

“I don’t understand why bands want to get big” muses Weiss, then with a glance across the stage “apart from the money”. But she’s right. Small gigs to tighter, more passionate crowds are better and tonight the crowd in Cargo cheer every song –  from new ones such as The Goat to old favourites, Birds and I Never Wanna See You Again.

Ever the seasoned showman, Sam Coomes had his feet up on his wood encased keyboard (labelled Fragile, Musical Instrument) right from first song and at times tonight plays it with all four limbs. Equally able to rock on keyboard or guitar with Janet’s incendiary drumming to complement him, Coomes powers through the likes of Everybody-Knows-This-Is-Nowhere-ish Rockabilly Party, and the excellent Double Deuce from new LP Mole City.

Referring to a self-made retrospective fanzine documenting the band’s 20 years we hear that Jon Spencer has written an essay on the next song, Its Raining. It’s “what music can mean to a given person at a certain time”. And that’s just it, musicians expressing themselves and it meaning something to people. No bullshit, corporate or otherwise. Quasi have spent 20 years not so much in the ‘Music Biz’ but kicking against the industry or capital more broadly, assisted by indie label cousins Domino and Matador on either side of the Atlantic.

Returning to the significance of the date Sam says, “I wrote this with my now wife who was born on Friday 13th, so it’s a wonderful date for me” before playing It’s Hard to Turn Me On. A love song that is one of a kind, going places most love songs don’t, forged in its disaffection with American mass culture and the daily grind. “Mornings I tell you what I dream, before we’re swallowed by the work machine” is bittersweet and resonant and a reminder of how truly great Quasi are.

The evening wouldn’t be complete without some live renditions of tracks recorded for the band’s recent covers EP. I didn’t think I could ever enjoy Queen’s Don’t Stop Me Now but alongside Black Sabbath’s War Pigs it sounds great given the Quasi treatment.

“A musical partner who allows me to be myself” is how Janet Weiss describes Sam Coomes on stage in what is almost a tear-jerking moment. They joke around all night but this is really honest and heartfelt. As is their praise of the ever faithful Domino Recording Co who, before finding bigger financial success releasing Franz Ferdinand and Arctic Monkeys, scoured the US underground for some of the best music of the 90s such as Sebadoh, Will Oldham, Pavement and Quasi as well as their close friend, Elliot Smith. Without Domino life would be different. Worse actually. Much, much worse.

Now go and buy all the Quasi albums here if you don’t have them already. Though they remain a hidden gem it’s great to see them in such fine form, rocking as hard and as eloquently as ever.

~
All words by Willow Colios. More writing by Willow on Louder Than War can be found at his author’s archive. You can follow him on Twitter @ShootTheSinger. An interview from 2012’s Independent Label Market with Domino founder Laurence Bell can be found here