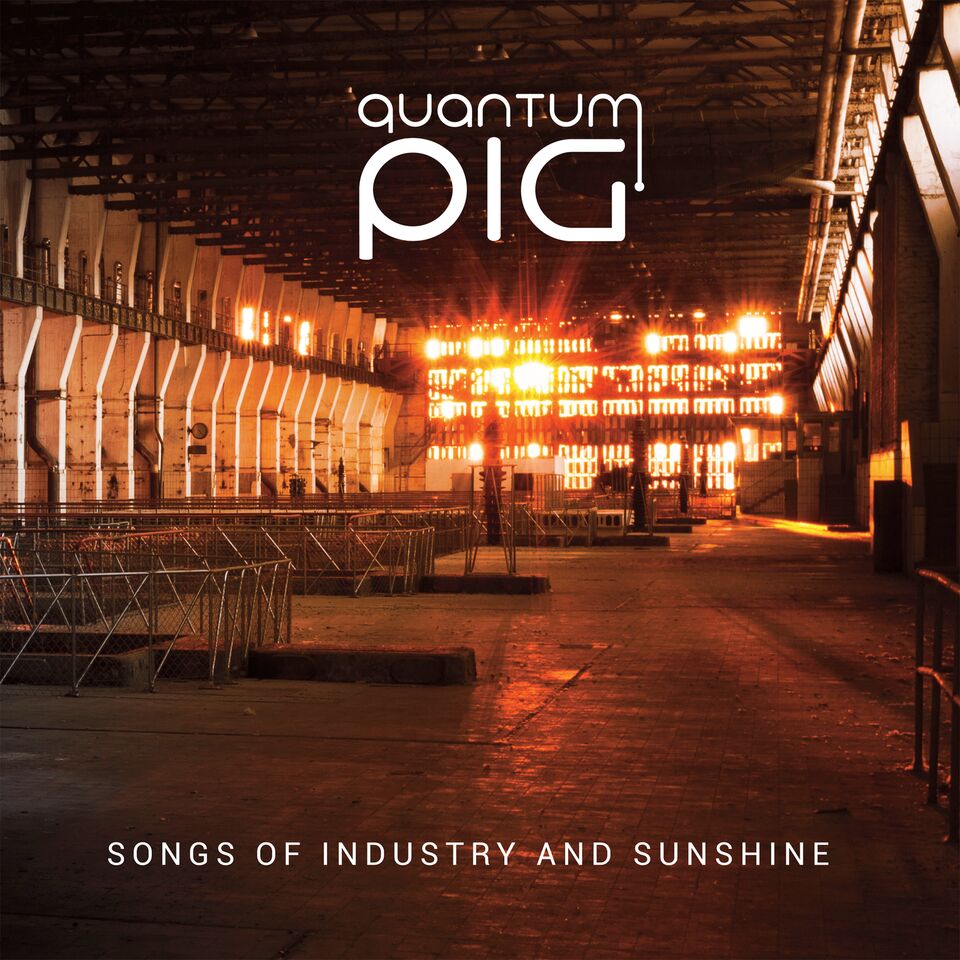 A prog band and “not a prog band”

Quantum Pig – the duo of  Ian Faragher  and Mark Stevenson – find themselves in the enviable position of being signed to John Mitchell’s White Star Records with the man himself – veteran of many too numerous to mention pop/prog hybrids – taking the helm in the studio to help guide their vision.

Taking their cues from the past, present (and future?), the duo have meticulously sketched out their unique calling card. A combination of old school values – occasionally challenging a Waters/Floyd style delivery in the spoken and the mildly histrionic – with a contemporary twist via soundbites dropping here and there; the sort of technique employed by the Public Service Broadcasting styled bands of the modern progressive era.

Although they hit the ground running with the drive and bounce of Statement Of Intent and the single Citizen & State, plus the short sharp rush through Things that underlines just one of their influences, the central piece is the lengthy workout on Long Letter Home, where several sections combine to generate a multi-part arrangement that ebbs and flows while the clock ticks into double figures.

John Mitchell brings his trademark full palette to the table without overpowering the vocals which are essentially low key and while applying his magic touch to give the songs some element of vastness, is able to counter with a more sensitive touch on the atmospheric and gentler parts.  A perfectly titled album – a focus on hard work (their own) and optimism and barely a mention of Brexit. Interested in the rise and fall sequencing of Songs Of Industry And Sunshine that move via a belter of a slow burner in Keeping The Nation Warm to the sobriety of Dirty Old Engine, read on as we took the chance to fire a few questions at Ian and Mark.

Louder Than War: ‘London based genre hopping intellects’ – that’s a nice PR description but with your wildly varying backgrounds, what led to you doing this album?

Quantum Pig: A shared love of beer and prog! Initially we just wanted to scratch our prog itches for fun, but it all got a bit out of hand. As much as we’d like to pretend otherwise, “intellect” had less to do with it than beer!

On a more serious note, as we delved further into things, it started sounding better than we had originally expected…. so we thought we’d better see what a full album would be like. But in truth, we wrote it as its own reward – we weren’t looking for a deal, just to build something with love.

LTW: Probably an obvious one but could you explain the significance of the album title Songs Of Industry And Sunshine.

LTW: So what’s the general writing procedure you guys adopt?

QP: Ian slaves away on some amazing music while throwing in the odd lyrical or top line ‘spark’ for Mark to go away and turn into a completed lyric and melody line. Mark might add the odd solo or keyboard texture but the music is mostly the result of Ian in his bunker – and the words and toplines are mostly the result of Mark in his – although there is inevitable crossover. We work quite separately actually and send each other lovely gifts via dropbox – even though we live around the corner from each other!

LTW: I read a quote where Ian has called the album one that’s “riven through with hope and aspiration,” which is an interesting and refreshing philosophy bearing in mind the current doom and despair of the world often ‘celebrated’ in song.

QP: Yep. Well that’s a reflection of Mark’s day job as a futurist – where he’s looking for solutions to the world’s problems, rather than just feeling beaten by them. It’s easy to bitch about what’s wrong, it’s hard work to hope and make hope real – pragmatic optimism. We know which side we’re on.

LTW: Working with John Mitchell – how did that come about?

QP: Mark was in an indie pop band ‘Clear’ a long time ago (1 album, 2 singles, mass obscurity) and John produced some of their early demos. It was during these sessions that they became mates, bonding over a discussion about the relative merits of various Yes albums. It seemed natural to play John some of the early Quantum Pig tracks to get his advice, but he went way beyond advice and became more actively involved, which was a huge compliment.

LTW: And although he’s credited as ‘producer’ what was his actual contribution?

He mixed the album and did a blistering solo for us on ‘Keep the Nation Warm’. He also signed us (with Chris Hillman) to White Star Records. Thanks John!

LTW: Was it John who suggested/brought in Craig Blundell?

QP: Craig was suggested to us by both John and Bruce Soord (from The Pineapple Thief). He is, after all, one of the best drummers in the world.

LTW: Did you get the pleasure/honour of working alongside Craig or was it a case of him flying his parts in during gaps in his hectic schedule?

QP: We got to work with him during two days in John’s studio. It’s a huge privilege to see an artist of that stature up close – and working on your material. He’s also a very nice bloke. We’ll certainly be asking him to join us on album 2.

LTW: The Long Letter Home is already ringing the ‘track of the year’ bells for me. Its two contrasting parts make it feel like two songs joined in the middle – is that how it began and if so what led to the decision to create one longer composition?

QP: Actually it’s 4 tracks rolled into one! Because the theme is so epic – human exploration throughout history and into the future – we needed a lot of moods and a sense of scale, so Long Letter Home became the big ‘centrepiece’ of the album.

LTW: One song that’s crept up on me and is suddenly becoming my favourite on the album is Keeping The Nation Warm. Great guitar solo at the end btw. Almost a song of two halves (again!) and very interesting lyrically from what I can pick up. Can you talk me through that track?

QP: The solo is John – we thought this song needed a bit of Mr. Mitchell, so we left a big space for his genius which he filled better than we could have hoped. The track itself is about the hollowing out of old mining towns and the loss of community. It’s two stories, one about the town’s colliery band, one about post-Brexit Britain. But it’s not about division, it’s about empathy.

LTW: How much time do you deliberate over track sequencing? The album starts really strong with Statement Of Intent  and Citizen And State, a big number in the centre and ends with a more reflective number…

QP: The album had to be in that order. It just did. It starts with the big loud ones, gets more proggy and stretched out in the middle and ends with a lament on a single piano….but there is a trick up our sleeve on ordering… which you’ll find out about on album 2 (although it affects album 1).

LTW: So the plan for what comes next is…

QP: At this stage, all we can say is that we have a grand plan for the Quantum Pig Oeuvre! Album 2 is still very much in the early stages, but it’s one we think QP fans will like, adds an extra dimension to their enjoyment, and to the interplay not just of the tracks on each record but between the records themselves. We can’t say much in terms of timescale for release, but rest assured we’ll be very vocal about it when the time comes!