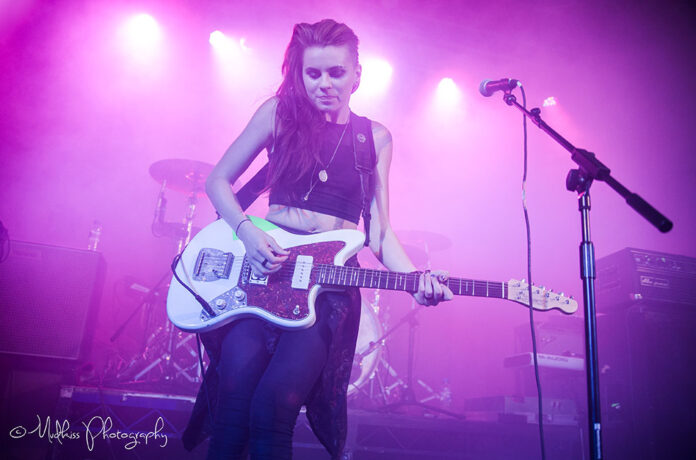 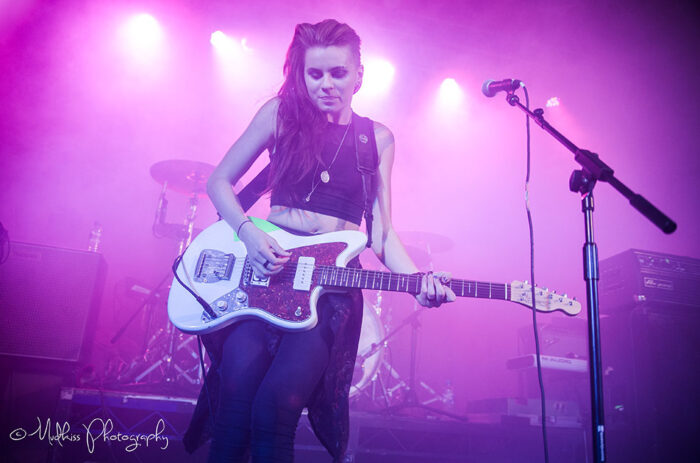 Louder Than War’s Melanie Smith (photos) and Clive K Hammond (words) were at PVRIS’ debut show in Manchester as they opened for Watford post-hardcore outfit Lower Than Atlantis last night. Below they report back in full…

Hailing from Lowell, Massachusetts, electronic rock quartet PVRIS – pronounced Paris – have never performed in Manchester. Let alone Britain. Considering their sizable reputation within most alternative circles, their status as ’19:45-20:15′ openers left room for much contemplation. Whether it was frustration, policy or an unwavering sense of two fingers beats all, PVRIS wasted no time in introducing themselves to Manchester Academy 2’s auditorium.

Upon entry ‘Smoke’ laid the PVRIS marker upon which the resulting mayhem unfolded. Harbouring an urgency generated primarily by The Screaming Females – offset by elements homologous with Glass Light Anthem’s new found lust for a sequencer – ‘Smoke’ fused lines of sharp, reflective guitar with warping bass and regimental handclaps to create a barbaric precedent; rarely such dominance has been witnessed at such a watershed hour. 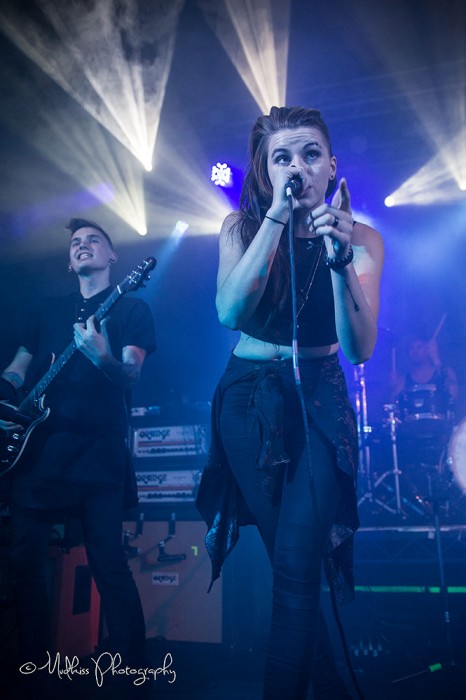 The fundamental PVRIS model is recurrent; cooled, reflective TheXX coated montages of sounds unleash Lyndsey Gunnulfsen’s gritty vocal take on London Grammar’s Hannah Reid, dampen before the remaining trio of musicians erupt through vigorous raptures of crumbling distortion, ornamented with colours of brash, alternative pop. The lead track from their inaugural release ‘White Noise’ characterised this union. In parts it was like listening to a Robyn track; waves of analogue synth rain down, fluctuating extensively between the two towering speakers. It felt more imposing than their opening support slot warranted. The stadium anthem charm was abundantly lucid.

‘Fires’ – “I wanna see you jump around like a bunch of idiots tonight Manchester,” called Gunnulfsen; an act duly reciprocated by her bewitched followers and adjoining ensemble – snapped. An atmospheric marriage of quaking electronica and jerking alternative rock. It was urgently heightened by lead guitarist Alex Babinski’s math rock dotted melodies; furiously striking out against the shuddering chorus, the progressions used intensified the impulsive energy pent up throughout their jaunt.

Gunnulfsen’s utterances resembled a vocalist hardened; ‘Mirrors’ – containing bursts of hesitant synth, echoing progressions and a verse that was so texturally stripped it could only encourage a rapturous, engulfing refrain – established a blues tinged side to the singer whilst ‘St Patrick’ – quintessential in their alternative pop meets 90s garage notions, a floating ambience was delivered by its climax – encouraged a more serpentine appeal to her melodic craft. In short the sensations upon which Gunnulfsen scales is frightening.

‘My House’ defined and closed their first Mancunian set. Its disturbed flickering synth a constant, hypnotising fixture – Gunnulfsen now eye level and fronting up to the gathering audience ahead of her – it granted the room the routine upon which their night would follow. Distortion, hooks, bollocks and crown-banging. Next time PVRIS are here it will be another troop’s job to firm up a crowd for them.