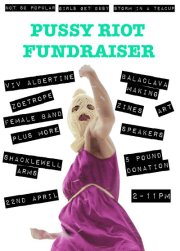 The second of those links reported how after a recent stunt in a Russian cathedral several members of Pussy Riot were arrested & they face up to 7 years in prison under a charge of “aggravated hooliganism”.

Despite one of the members having a 4 year old child bail was refused them. Fans around the world have rallied in support & on Sunday an event featuring Viv Albertine has been organised in London.

The event is at The Shacklewell Arms, 2pm till 11pm.

It will require a Ã‚Â£5 donation & you can find further details on Facebook.

As is often the case with these things the best chance of a positive outcome will be if pressure comes from outside of Russia. As the Russian writer Dmitry Bykov said when speaking out about this case:

“In the Brezhnev era dissidents always knew they had support abroad. Now you are sitting by as three young women are effectively tortured.”

Meanwhile, in case you missed it a week or so ago Kathleen Hanna (of Bikini Kill) sent this message of support to Pussy Riot: