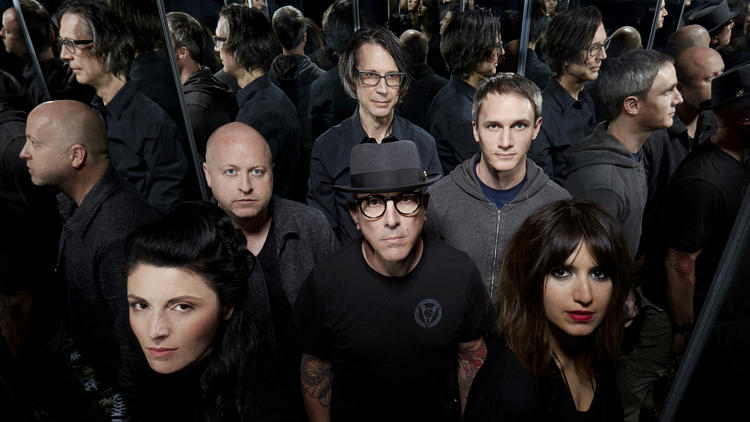 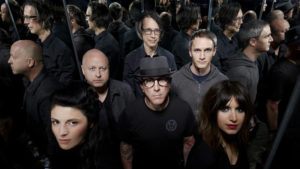 Puscifer is the side project of Tool frontman,  Maynard James Keenan – a man who plays music by his own rules. LTW contributor and Membranes drummer Rob Haynes is in awe at their genius…

Twenty or so years after their formation, a celebration seems to be in order to mark Puscifer’s first ever UK shows. With balloons and fireworks evidently too conventional an idea, instead they’ve brought a Mexican wrestling troupe over with them. Muscled, masked and limber, Luchafer provide 20 minutes of well-choreographed grunting and crashing, with proper athleticism and some genuinely wince-inducing slams. The finer points of this branch of wrestling culture may be lost over here, but from a UK generation whose nannas used to yell at the likes of Mick McManus, Kendo Nagasaki and Giant Haystacks, we can deal with this just fine.

And so to the main act: in addition to a golden singing voice, Maynard James Keenan has an unfaltering eye for a perfectly-aligned project, with Tool and A Perfect Circle each racking up millions of global sales. Puscifer was initially an unlikely addition to this run of success – literally a joke band at first (a brief appearance in the Python-esque Mr Show), the project took on a seemingly unstoppable momentum to become a serious endeavour, now three albums in to an increasingly acclaimed career curve.

Puscifer’s latest album Money Shot is a beautiful, fragile affair full of spidery rhythms and shimmering melodies. Part of the ongoing contrasts of the band is the absurdist humour running along the grave solemnity of the music, and the band arrive onstage to film of a long pre-recorded speech by Maynard in costume and ridiculous wig before the frontman and co-vocalist Carina Round (an effective export from Wolverhampton to California) entwine their voices in a perfect embrace and dissolve into ‘Simultaneous’. It’s a glorious musical entrance, the stage lights rising to reveal Keenan and Round occupying the wrestling ring, flanked by guitars and keyboards, with impressive drummer Jeff Friedl front and centre.

The wrestlers hang around, posing, skirmishing and dancing throughout the set. When Keenan and Round start their strange, lurching choreography, like the malfunctioning mannequins in Blade Runner, the whole ensemble silhouetted by the back projections, it makes for a strikingly effective spectacle.

The set is mainly comprised of ‘Money Shot’ tracks which, despite their gossamer intricacy, can get a little samey in large chunks, so are healthily interspersed with older tracks – the potent elemental force of ‘Vagina Mine’, the hillbilly rock-out of ‘Conditions of my Parole’ (during which Maynard may or may not have got entangled in the ropes of the wrestling ring as he tried to climb back in – it was difficult to tell with everything else going on around him) and the thumping swagger of ‘Toma’.

The evening ends with the brooding ‘Autumn’ – thus not with a bang, but a sultry and potent ember-glow. It’s not conventional way to end such a triumphant night, but when was Puscifer ever about doing the obvious?