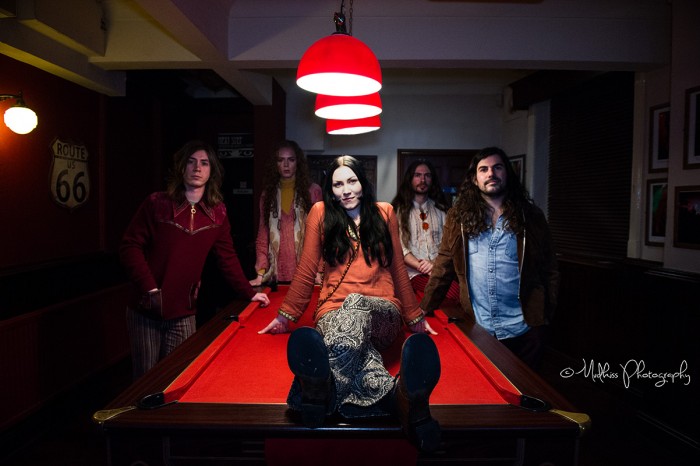 Purson are a young psychedelic/progressive rock band from Southend – Nigel Carr interviewed the band’s leader Rosalie Cunningham at their recent gig in Bolton for Louder than War, Melanie Smith was on hand taking photographs.

Louder Than War had the the opportunity to chat with Rosalie Cunningham before the show and asked her a few questions about the band, the new album and the upcoming shows.

“I have known for a while that this was the right line-up because we’ve been through a few! it’s the one that feels right”.

LTW: Can you tell me a little about your previous outfit Ipso Facto?

RC: ‘I was young and naive, and moved to East London at 16, it wasn’t cool to be flowery and I got on to post punk. Magazine and The Stranglers, rather than the aggressive ones. I was trying to fit in and I’m happy with the work I did. Victoria, (Smith),  is still a session musician and Sam, (Valentine),  has given up music unfortunately.’

LTW: Is tonight a one off prequel to the tour?

RC: ‘We have played here a couple of times before and Jon (The venue’s owner), has been really championing the band so I want to give him something back.’

LTW: Can you tell us a little about the new album Desire’s Magic Theatre and how the sound has developed:

RC: ‘I’m a lot happier these days, I wasn’t that happy with the first album, (2013’s The Circle And The Blue Door), but I’m three years older now and have learned how to do it better. With the new album, ( Which comes out on April 29th), I wrote all of it and play most of the instruments as well. George, (Hudson), plays a couple of lead guitar parts and Raph, (Raphael Mura), plays drums so it’s virtually a solo album.’ 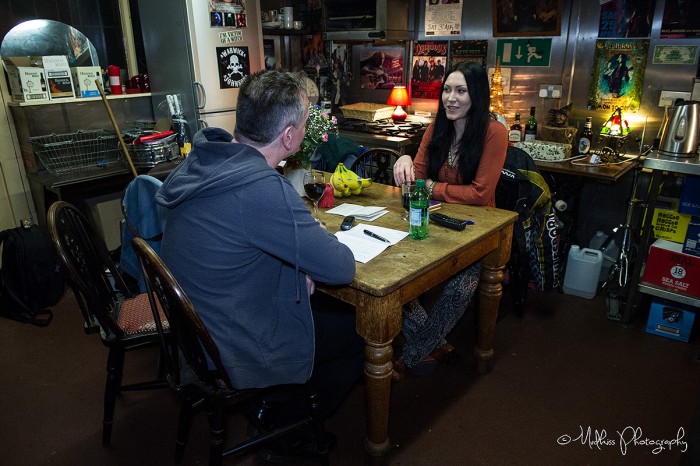 LTW: How do you handle the lyric writing?

RC: ‘I am constantly writing stuff down in a diary basically, I write down anything that pops in to my head that is interesting and don’t try and be too poetic about it, I just try and get the essence of the way I was feeling or sometimes I just have an idea about something and it flows.’

RC: I think we are, ‘Ogden’s, (Nut Gone Flake – 1968 Album by The Small Faces), was a huge influence in the way that it is very early progressive and that it’s a concept album with a storyline. I have been living on my own, single and haven’t needed or tried to impress anyone, I have been doing it for myself. I have kind of gone back to my roots which is that 60’s stuff, early prog. and and I’m happier so obviously the songs are happier!’

LTW: It’s feels like a melting pot of late 60′ and early 70’s prog and I believe your dad was a big influence on you?

RC: ‘A lot of my friends are into 70’s progressive music like Van Der Graff Generator and Camel – and all of us, (in the band), are into the same stuff with slight variations. Marc Riley found it really funny the other day that we were even aware of The Snow Goose (1975 album by Camel), It’s bizarre, H to He (Van Der Graaf Generator), is just one of my favourite fucking albums, it’s incredible. Obviously I wasn’t there when the albums were released but things like that were playing in my house, I was aware of them and heard the sound that we would call ‘prog’, and I knew I loved it from when I was a child like Genesis, my dad liked Genesis a lot’.

LTW: How was the tour with Ghost last year?

RC: ‘That was pretty amazing, we did six weeks in America , big shows, like 2000 capacity theatres and it’s the first time we ever gigged for that much time, we didn’t even know if we’d come back still together! Life on the road was amazing and I have known for a while that this was the right line-up because we’ve been through a few!– it’s the one that feels right.’

LTW: You look right together – you have chosen a look.

RC: ‘Yeah the only person that doesn’t feel really passionate about the clothes is Raph, he’s really enjoying it though. It’s just something that he has never done before. He loves dressing up and showing off! The rest of us are all really into clothes and always have been.’

LTW: You seem to have aligned yourself with metal bands – I think you are much more poppy?

RC: ‘It’s a strange situation, I was baffled at first that we were mentioned in the same breath as all these metal bands but it has a lot to so with the label’s fan base. There is a lack of classic rock bands in the mainstream and people that are metal fans associate themselves with metal as it’s the closest thing they have to classic rock. We have been lumped in with that because there isn’t really a rock scene. There is nowhere for us to sit – we don’t sit with the indie kids because we are too weird, too far out. It could be as simple as the fact that they don’t understand it.’

LTW: How are you going to reach the kids which is where mega success will emanate?

RC: ‘Dante (Spinefarm Records), who signed us is incredibly passionate about the band. He really gets the vision and gets where it’s going. Until the album drops and is digested by people we don’t really know how to do it. We are just at the moment trying to do as much as we can. We are going back to America and we are going to tour hard. The average age of the audience is definitely lower in other parts of the world but we haven’t done much UK stuff recently; It will be interesting to see on this tour if it has come down but that’s exactly where we need to go.’

‘The Ghost tour was a real eye opener, a completely different reaction to over here. They went crazy for us; Over here they are a bit confused, they don’t know if they are allowed to like it yet! In the US we were playing to fresh ears every night and they were saying, ‘we love it!’

LTW: You recently referenced Bowie as being a big influence on you?

RC: ‘I have been in pieces basically, he was such a big influence on me. I found out (about his death), on the way to the studio for a week of recording and I wasn’t prepared for that at all and I was like ‘the studio’s booked now, I can’t cancel it’ and I cried all the way there in the car, got there and thought well I’ve got to fucking do it, come on!’ 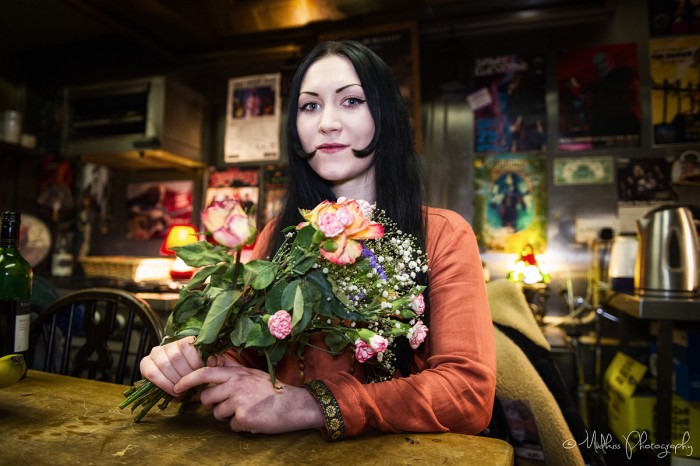 LTW: What is Spiderwood Farm ? (Stand out track off the first album)

RC: ‘A 1971 copy of Sounds magazine that I saw at my dad’s house, it was out on the table and I was just looking through it and there was a black and white picture of this dorky looking teenage band called Spiderwood Farm, and I thought that was really cool.’

LTW: What your favourite album of all time?

RC: ‘Abbey Road, as a final statement, a piece of art and a summing up of everything that’s great about the Beatles and just brilliant that they said goodbye like that.’

LTW: Have you lined up any festivals this summer?

RC: ‘We are on Rambling Man and I think Reading and Leeds.’

LTW: What’s your hobby outside music?

RC: ‘I love sewing and making clothes, I am constantly doing that and for the boys. I also like reading about consciousness expansion, there’s was a guy called Alan Watts and he called himself a ‘spiritual entertainer’ which I think is really good, he was very psychedelic, very hippy, very funny, but died an alcoholic, no saint at all but with a lot of interesting ideas about stuff’.

LTW: What female artists do you look up to?

RC: ‘Kate Bush – I know she doesn’t sound like me and it’s not specifically my kind of music, but as an artist I am in awe of her. And the way she’s done it, she is just so fucking cool.’

LTW: What about the Tony Iommi fascination?

RC: ‘Because he’s the best guitarist ever!’

In many ways Purson are stuck between a rock and a hard place (ahem!). Too pop for metal fans, too heavy for the pop crowd. They occupy that rarefied atmosphere of being bang on, current and unique with achingly catchy melodies and sublime vocals and for that reason they deserve to be enormous. As loud and intense as Placebo with the swagger and confidence of a spiky young punk band, they offer up pure, progressive, theatrical rock and roll and on stage Rosie Cunningham is already very much the rock star she aspires to be.