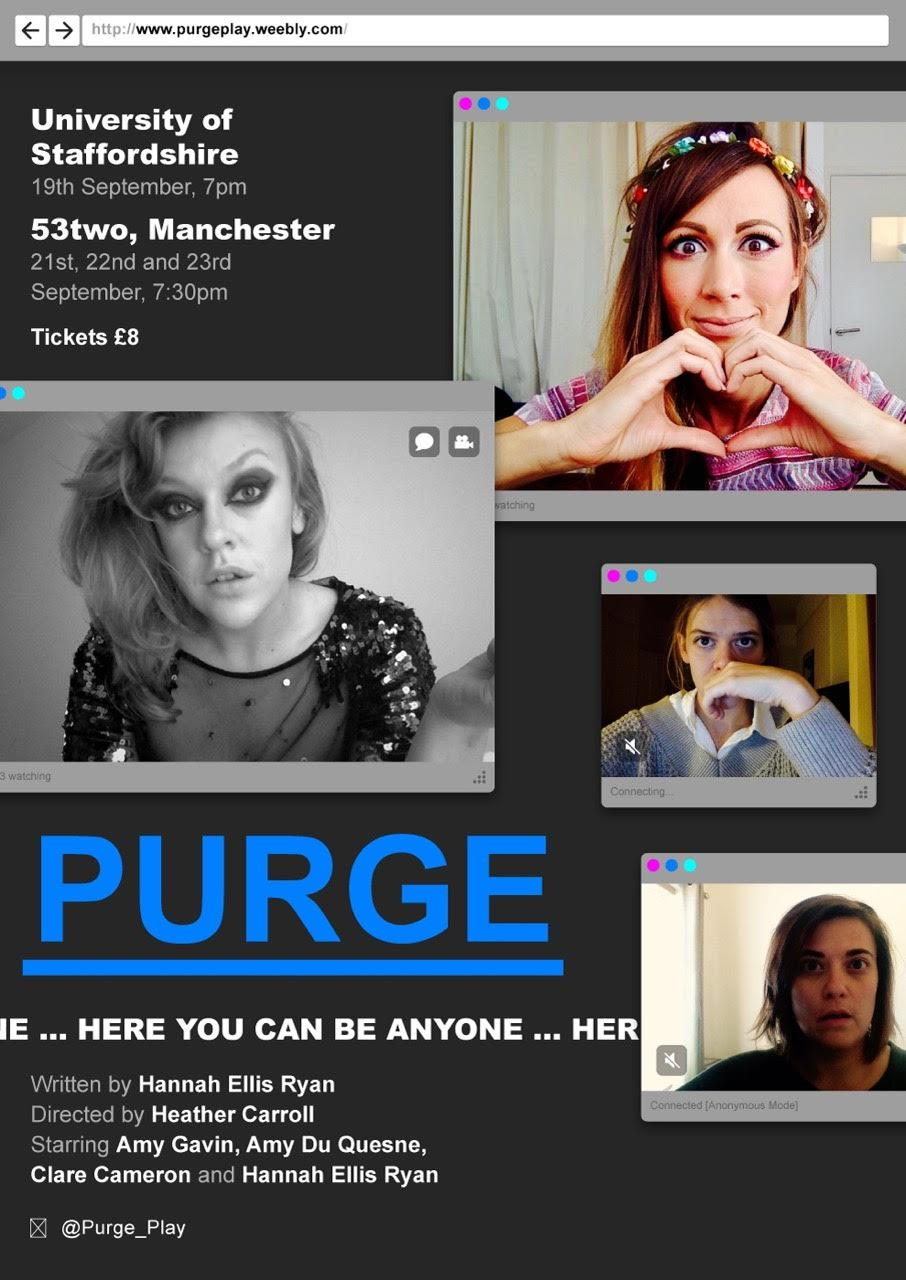 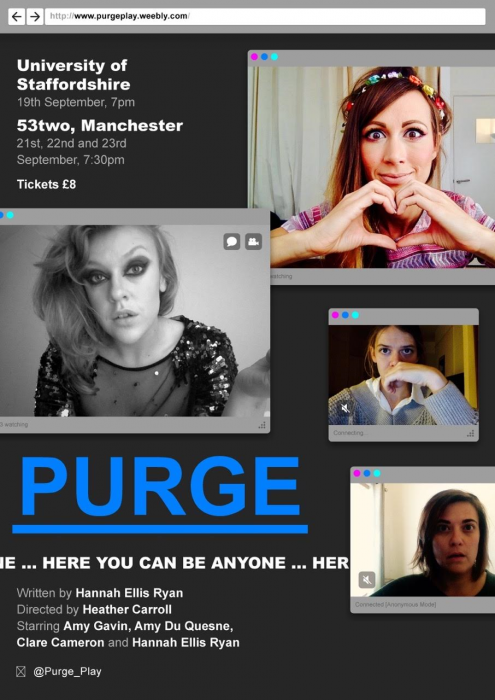 Come and see how PURGE packs a punch.

PURGE is a new play which spills the hard-hitting stories of young women, their bodies and internet stardom onto the stage. Louder Than War’s Emily Oldfield considers…

This is set to be a provocative production taking on contemporary issues this September 21-23 7.30pm at 53two – the innovative arts space under the arches behind Manchester’s Beetham Tower.

If you think that modern theatre is a case of obscure themes and distant events – then PURGE throws up some different ideas, and gives you a taste of something gutsy.

Here we see the spotlight shone on the darker side of YouTube sensations, the struggle to maintain the ‘perfect weight’ and how the internet may well blur the line between illness and inspiration. It’s brilliantly dark, and boldly done – written by Hannah Ellis Ryan and directed by Heather Carroll.

Follow the story of May, a young nurse battling an eating disorder. Through her we meet her idol Leia –  an American bulimic with a YouTube channel. Here we see how fan culture can turn into fixation, and perceptions of ‘beauty’ become blurred.

Another innovative twist is the other ongoing character relationship between Regina –  a make-up vlogger with a fan base of 200,000 – and her alienated mother, Carol. It allows us to question, who is out-of-touch and who is intense?

And how far is ‘too far’ when it comes to the internet? During the run of this dramatic and highly important piece of work, I decided to speak to writer and actor Hannah Elis Ryan:

1)      Hello Hannah! What inspired PURGE and why a focus on women in particular?
“Hello! Thank you so much for your interest in PURGE and helping us raise awareness around the piece. I found myself watching quite a lot of YouTube when I first moved to England. For someone a bit isolated, it’s a minefield of content and I quickly found the dark patches, and was blown away by what is publicly accessible. It made me think about the vulnerable people who stumble into this world and perhaps cannot get out.
“The two ‘vlogger’ characters (Regina and Leia) are based off real YouTube celebrities and what happened to them, and how their actions affected millions of fans. I am also passionate about creating more roles for women, in my job as a freelance producer. I see so few plays come along with that focus, so wanted to put my money where my mouth is! We proudly have an all-female team! Writer, director, even stage manager.”

2)      Why is a play an effective way of conveying these themes i.e. why not  a short film
“Theatre has always been my favourite art-form, and I think it’s important for theatre to explore multi-disciplinary projects. PURGE encompasses the real, the surreal and the technical. In future versions, we can have the audience live-tweeting, with their tweets available to see on stage, we can have live video played back via projection – all kinds of possibilities.
“Having the actors so close, and watching something confronting (like a girl binging a lot of food) right in front of you, I think has a real power that film would not achieve in quite the same way.”

3)      Is there something in particular you want the audience to leave with after watching PURGE?
“Just moved. I would like everyone to be moved, and I would like the audiences to go away agreeing with me that this aspect of the internet, is not a safe place for vulnerable young women. I want to raise awareness and, if anyone can be helped along the way, that would be a remarkable bonus.”

4)      What has been the most rewarding aspect of working on the show?
“The team. 100%. The people I have been able to work with on this process have made it a dream. The cast are incredible and embodied these characters beyond my wildest dreams. Our director, Heather, took on the piece, believing in it as much as I did, and understood every nook and cranny of what it took to make it work.
“And our star, the Stage Manager, Alice, had the toughest job of all. This piece is so technical and she built the set, constructed the screens, made the projections, and presses buttons every half a second, without breaking a sweat and without complaint. The woman is a god.”

5)      And the most challenging?
“Anticipating responses. I believe in this play. I believe in its subject matter and the way we’ve told it. The scariest thing is what people will say and how they will react. I know that there will be a huge variety of opinions regarding this piece, as it’s so dark and “out there”. But I look forward to receiving them and just hope I can use everything constructively to do this story justice.”

6)      Why should people come and see it?
“I truly believe it’s an original. Its unlike anything I’ve seen, and is a story I’m sure will be explored a lot in years to come. YouTube is a world, with many dark corners, entered into by millions and millions of people.
“Yet those who do not go into these “communities” know nothing about their existence. But the person sitting next to you on the bus could be an online celebrity. I find it fascinating. And I think you will too.”