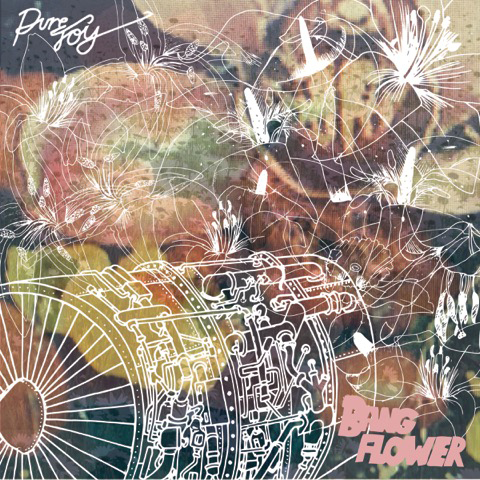 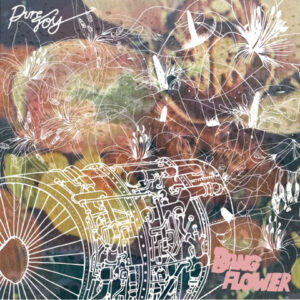 There is something in them ol’ waters down in the Wirral. The hazy days of 60’s lysergic pop remains living and breathing and now we get another addition to the canon with Pure Joy’s full length debut LP, ‘Bang Flowers’.

Comparisons to those other pop explorers from the Wirral, The Coral will no doubt be bandied about when it comes to describing the sound of Pure Joy and whilst they do seem to share the same playful sense of humour and a want to explore the outer reaches of sonic pop, they are most certainly different animals. Pure Joy are more shoegaze than stoned days and their sound is much harsher than coarse than the richer sounding works of their contemporaries.

Production wise ‘Bang Flower’ flits between demo sounding quality to harsh, smothered tones making it part lo-fi part cinematic (often within the space of the same song). Instrumentally we get a blend of traditional piano, guitar, drums, vocals and the more experimental sounds of synths and electronics which actually bring to mind the works of Super Furry Animals. Underneath all the cacophony however lies the heart of traditional songwriters, whether that be on the classic guitar style sound that plays out ‘Don’t Do It’ or the wonderfully unexpected surf guitar line that appears within ‘Girl’.

Highlights on the album include the driving ‘Turner Sky’ which mixes together perfectly MBV with Bruce Springsteen, the woozy Sunday-lounging ‘Thunderlooper’ which doo-wops its way into the subconscious and the absolutely triumphant closer ‘O’Sullivan On Song’ (which samples the ’95 film Billy Madison)

Vocally, it is very hard to decipher the lyrics which aides the repeated listen experience and there is a wonderful blend of harmony throughout.

Some times the band take too much of a left turn and tracks like ‘The Sex Beatles’ and ‘Theme From…Peach Fuzz’ are weak compared to the rest of the album but overall ‘Bang Flower’ is a fine listen and one which will create earworms for the listener to whistle weeks after the first play through.