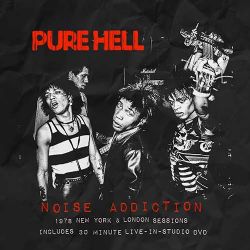 Collection of the studio recordings by the infamous 1977 black punk band, plus a DVD from a Cable TV performance in 1978. Louder Than War’s Ian Canty reviews.

Death may have recorded earlier, the Bad Brains made the biggest splash but without a doubt Pure Hell were the first black punk band. Forming in Philadelphia in 1974 and hanging out with the New York Dolls, they supported the Pistols during their ill-fated US jaunt and also played with the even-more-ill-fated Sid in 1978 when he moved to the Big Apple. Coming on like a speeded up Dead Boys having a fire-fight with the Stooges while the MC5 held their leather jackets, their music still is an exciting drive all these years on. Like their protégés the Bad Brains Pure Hell were excellent musicians who used the punk format to cram in as many intricate notes as possible, while still remaining as tight as the proverbial gnat’s chuff and never losing the kick and vital snap in their music.

Curtis Knight (R n B singer of the Squires, who also featured a young James Hendrix on guitar) became their manager and oversaw their career for better and for worse – the reason these recordings didn’t see the light of day until many years after being put on tape was at Knight’s insistence. Along with managing the band, he also produced one of the two sessions presented on the CD part of this package – the other at the end of 1978 in London was amazingly recorded by the Groundhogs main man Tony McPhee. This London jaunt turned out to be the last hurrah for Pure Hell as Knight fell out badly with them and refused to release their album. Even a well-received UK tour and an appearance alongside the ascendant Subs at the Lyceum couldn’t stop them splitting on their return stateside.

All they left behind was one single, a cover of the Nancy Sinatra song “These Boots Are Made For Walking”/”No Rules”, which are both included on this collection along with 13 other blasts of high power, energy-driven Punk Rock with more than a slight Hendrix influenced guitar at some points. Some of the tracks, particularly “The Girl With The Hungry Eyes”, (about Nancy Spungen, who charismatic lead singer Kenny Gordon knew from his schooldays) verge on proto-hardcore. Definitely they must have some influence on the coming CBGBs scene of that ilk, coming smack between that and the original scene of the Ramones and Patti Smith. Pure Hell take you on a super-fast ride round the 70s Rotten Apple and the thrills keep coming, cheap, nasty, but irresistible.

The accompanying DVD is taken from a 1978 performance for a New York Cable channel. It’s rough as you would expect with primitive effects, dodgy picture quality at some points and canned applause after each song, but even so it is valuable footage of an exhilarating and important band that somehow slipped under the radar and more than likely the only film of the band live available anywhere. Great sleeve notes from Andy Davis sets out the full Pure Hell story with input from band leader Kenny “Stinker” Gordon and taken together with the CD and DVD it all forms a vital package to the best Punk band you never knew you needed to hear.