Kenny ‘Stinker’ Gordon was one of the people involved at the inception of the US punk scene – LTW’s Ted Dahlin caught up with him to look back at his past and to hear of his future plans.

I just caught up with Kenny “Stinker”Â Gordon; legendary front man of the 70’s all black punk band, PURE HELL.

He was involved in the punk music scene in New York around the New York Dolls, The Ramones, Blondie, and Patti Smith to name just a few. He also played with Sid Vicious at Max’s Kansas City a few short weeks before Nancy’s demise. So what’s he up to these days now that punk is having a renaissance? I had a little chat and this is what he told me”Â¦

LTW: What sorts of music were you listening to and inspired you when you first started your first band?

Kenny: Hi Teddie Dahlin! Its remarkable having an ex – flame of Sid’s in a conversation. Because like John Simon Ritchie our music was a reflection of the violent 60’s, where Presidents and social civil leaders were murdered in public. A turn of tide technically and culturally was in full swing, exceeding to shape the 21st century. I was exposed to everything from the chitlins circuit (US live music club/venue circuit) to the British invasion that influenced the vision to write compositions. An eccentric blend of academic and innovation with Phil Lynott who was later at our flat when Pure Hell finally arrived.
We moved into The Chelsea Hotel when we first got into NYC where we’d go out to after hours clubs with Thunders socializing with Todd Rungren and Ace Frehley and the likes. Soon to be known in the elite in crowd. That had a lot to do with propelling our short career. All this before Malcolm ignited the Sex Pistols.

LTW: Punk has been a predominantly white, male, working class music culture. Yet you formed one of the few all black punk bands. I can’t think of any other actually. Was this a music genre that just appealed to you or was it because you grew up during the Civil Rights Movement and wanted to rebel?

Kenny: There were so many bands that just didn’t have the appeal to make any definite mark in the beginning of that era. Either you were there advancing in the hub of the scene (New York City, London, L.A.) or you weren’t. The basis gets lost in translation a bit. We were around The New York Dolls in 1974 when Vivian Westwood and Malcolm McLaren were assisting them, and Patti Smith and Television first played CBGB’s. All of them listened to Keith Richards, and Keith Richards listened to Chuck Berry! White working class and sorts of labels I think were tagged on as it grew.

LTW: You were obviously in to your music how did Pure Hell get together?

Kenny: Guess when you’re born with a 3rd eye it’s a gift (lol.) Always had the urgent urge and testosterone to want to perform. SEX and DRUGS and ROCK-n-ROLL! Iggy oozed of it and sparked a lot of people to carry street life thru.
New York City was 80 miles up the turnpike. After a stint at my college prep school in Philadelphia, I changed the name from Pretty Poison to Pure Hell. You gotta imagine we were a group of kids hanging downtown where the coolest of girls and drugs and entertainment was happening. You had to have the vision, talent and ambition to get anywhere.
I set a goal of experiencing England and California, with New York right there in reaching distance. I think we were simply on time. The Dolls used my drummer ‘Spider’ who I’ve known sense childhood to fill in for Jerry Nolan during their ‘Red Patent Leather’ shows designed by McLaren and Vivian at The Hippodrome in New York City early 75′. He’d also had gone over to England pre our debut there in 78′ with The Heartbreakers for a couple of shows, where he’d jammed

LTW: What’s the story behind the “Stinker”Â name?

Kenny: ‘STINKER’ is an American nick name Johnny Thunders once told his European girlfriend while we were all out in Los Angeles during 1987. My mother called me by the name ever since I was an infant. But you can easily attach it to a rather randy style of probing female anatomy (lol), I guess it’s alright you can print this! (lol.)

LTW: You moved to New York and quickly became affiliated with some well known people. Tell us how you get to know The New York Dolls.

Kenny: After moving into New York City at The Chelsea Hotel in 1974 for the first time, we were already acquainted with Neon Leon who was also from Philadelphia, where we had mingled with the Dolls at a show they did there at The Schubert Theatre.
Some of the earliest people were there like Wayne County and Patti Smith, traces of Iggy and the Stooges playing at Max’s Kansas City. As well as early Aerosmith and Kiss.
The Dolls were just dropped by Mercury Records and Malcolm and Vivian had come over from London to help them manage. They had lost their first drummer Billy Murcier in England prior to this time where their British agent, became our agent, when we debuted 78 in Europe; all connected!. 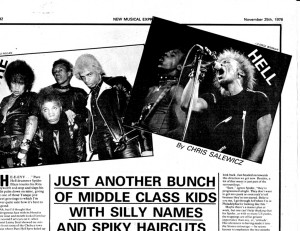 The Dolls took to us right away, we tended to remind them of themselves when they were younger. Part hoodlums, part musicians, the same mould. Except we were actually the negative to the picture. We moved in their rehearsal loft next door to The Chelsea with our equipment, where bands like Television hung out and practiced there as well. Spider filled in for Jerry while he and Author Kane were in rehab hospitalization. I guess you can say we had the clout to go about from then on.
LTW: You played Max Kansas City with my old friend Sid Vicious. What did you make of him and Nancy? Any memories you would like to share with us?

Kenny: The Pistols were designed to be the voice of the extreme rebellion youth living under a monarchy long past it’s due.
I’ve been describing my affiliation with the same influences that sparked the movement, so I understood where Sid and Nancy were coming from; bringing Sid to New York after the band had dispersed. The unbridled ride that the Sex Pistols had flung them in scattered and tattered directions. Nancy encouraged Sid over here on his reputation mostly alone. Both of them too young, now that I look back, to measure necessary discipline. I’d have helped him along if I could if that tragedy didn’t happen mere weeks after we met before we were off to go to the Netherlands and England.

LTW: Do you have a theory about Nancy’s death? Do you think Sid did it?

Kenny: I have no idea what took place between them, being we weren’t even in New York the week after we played Max’s with Sid, Dior, Nolan etc. I just know Nancy had a very cocky attitude (mimicking Sid perhaps?), and that heroin and personal declination breeds the nastiest situations.

LTW: You had met Curtis Knight and he became your manager. How did that come about and was it in hindsight a good working relationship?

Kenny: When Curtis Knight discovered our presence a couple of years later, after we’d been playing places like Mothers and Max’s Kansas City, in a way our persona magnified as in resemblance to Jimi Hendrix. It would come into play that ‘Fast’ Eddie Clark was Curtis’s guitarist in his earlier band Zeus, before leaving to join Motorhead circa the mid seventies.
Although Lemmy knows us from 78 when Motorhead was part of the punk circuit, as well as he’d played in The Damned, Hendrix – Hawkwind and the whole lot of it happened to all tie in. On the other hand Knight was seen by some as a culprit along with Ed Chalpin, milking Hendrix’s efforts extensively, even basement recordings. Our relationship came to a head when Knight threatened to cancel mid tour between Holland and England, in fear of losing reign when windows of opportunities began to open. That’s when Roy Fisher, the agent that handled the Dolls when Murcier died, stepped up with a lawyer.

LTW: You went on tour to Europe in 1978. What did you think of playing here compared to the US? Did you enjoy it?

Kenny: We had more success in Europe than the U.S. mainly because the Euros only got to see the people who were good enough to make it over there. Visa Versa the other way around! We were in great company there and I found it intriguing, different, exciting, and all along carving some sort of niche in history.

LTW: Then came the move to LA and you worked with Nine Inch Nails and Lemmy. How did that happen? Lemmy is touring Europe at the moment and coming here in a couple of weeks. Shall I tell hi from you?

Kenny: Yeah tell em’ howdy and I a show from a mini tour on a southern U.S. leg of his friend Alan ‘Boomer’ Davey’s Gun Slinger. When my drummer Spider and I got Pure Hell going again out in L.A. during 1987, we started recording with Mick Cripps of the L.A. Guns producing. This went on into the early – mid nineties with Mick bringing Charlie Clouser of Nine Inch Nails to New York, then Lemmy produced and played bass and back vocals on tracks back in Santa Monica again. The west coast recordings were done at Kathleen Wirt’s studio who was also involved with Alan Parker’s ‘Who Killed Nancy’ documentary movie they have me in.

Kenny: Like a lot of bands including the Pistols, the Dead Boys etc., it took its toll on the original tier of punk rockers. It died a bit accept for the ones major record companies finally caught on to profit from and carried thru. 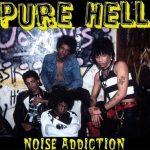 LTW: Your album ‘Noise Addiction’ didn’t come out until 2007. Why was this?

Kenny: This was partially due to the misfortune in dealing with Curtis Knight in the beginning because he confiscated the master recordings when we parted, only to resurface after his death thru his ex-wife Kathy Knight Mc Connell in 2006.

LTW: What are you doing now?

LTW: Any plans for the future? Any plans to come back to Europe?

Kenny: What I’d like to do is return to England and then add on some other European locations, to appear with peers like The U.K. Subs, Anti Nowhere League, The Damned; somewhere like the Blackpool Rebellion Festival or the likes. One more row for those who would like to know.