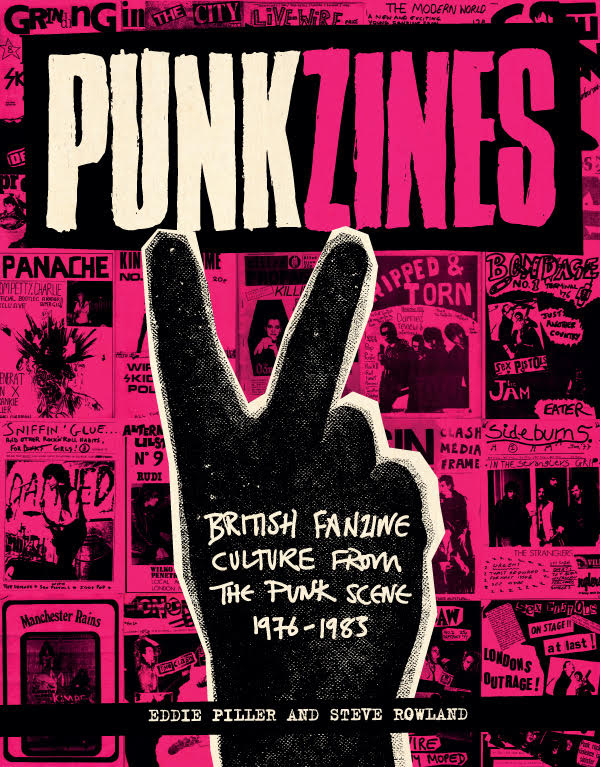 Along with its long-lasting influence on music, art, fashion and culture, the punk explosion in the late 1970s also fuelled a thriving underground press. A physical representation of punk’s DIY attitude, fanzines rebelled against established forms of expression, surviving outside of the mainstream media and providing a voice for a generation.

I imagine that most people reading this will have at some point bought, read, contributed to, or even published a fanzine. Many may have used the fanzine as a steppingstone into careers, paid or otherwise as DJ’s, designers, photographers, writers, promotors, musicians etc.

Regardless of production quality or ‘circulation’ for many years fanzines offered the first outlets of creativity for individuals and in pre-internet/Social Media days. Fanzines provided the vital link between fans and bands, often capturing the scene before the ‘mainstream’ music press were up to speed. The importance of the fanzine cannot be understated. The impact they have had on people’s lives, regardless of subject, music, football, Cult TV etc.

I’m sure many can remember their first, just as much as your first single or album. My first was Debris, purchased from Dave Haslam himself at the International in Manchester for the princely sum of 60p. Although lost a few years ago, the interview with Mark E. Smith, the feature on Manchester Rap (ahead of its time) as well as pre ‘press darling’s Stone Roses live on. (I do still have the free Moist/King of The Slums flexi that was with that issue though).

That night I was inspired to write a review of the gig, The Primitives. I didn’t send it anywhere to be published or used, but it did sow a seed which I occasionally revisited throughout my ‘adult’ life and now has taken root some 33 years later!

Dave, or the bloke selling his fanzine as he was known that night, had also suggested I also check what fanzines were on offer in Piccadilly Records. A couple of days later I went home with a couple of back issues of Debris, The Dream Inspires, Are You Scared To Get Happy and more flexis featuring bands and musicians who have informed my music tastes ever since.

OK, so apologies, I’m waffling on and you are wanting to know about the new Punkzines book from DJ and founder of Acid Jazz Records Eddie Piller and DJ and author Steve Rowland. But there is a point to this, honestly. This being, if you have an interest in music and pop culture and have discovered new bands in the same way I did, or have a love of pieces of A4 paper, stapled with one at the top right, or 2 along the side after being photocopied in school breaktimes or by parents after hours in offices, this book is for you.

Rather than jumping straight into 1976 the book provides a welcome reminder of the history of the word ‘punk’ and covers the 60’s anti-establishment magazines such as OZ and IT (International Times) along with future Sex Pistols designer, Jamie Reid’s Suburban Press from the ’70s. This then leads into the American fanzine ‘Punk’ featuring the CGBG’s set, particularly the Ramones whose name would adorn the first issue of the first ‘true’ British fanzine put together by Mark Perry, Sniffin Glue in 1976.

Punkzines explores the DIY culture of fanzines that arrived out of the Punk explosion and its various subculture offshoots. Featuring the legendary Sniffin’ Glue, 48 Thrills, Ripped & Torn among others. The book is lavishly illustrated with original and rare artwork of those homemade publications and interviews with fanzine editors, bands, DJs, promoters and journalists from 1976-1983; telling the story of Punk, through New Wave, Post Punk, Hardcore, and Street Punk, to Riot Grrl through those that were there.

For those that have regularly read the Music Press over the years or keep an eye on the media, many of the names will be familiar. It features individuals who have made the transition from fanzine to the mainstream, such as Jon Savage (London’s Outrage); Adrian Thrills (48 Thrills); James Brown (Attack On Bzag); Gary Crowley (The Modern World) and a certain John Robb (Blackpool Rox / Rox).

This is a book you will want to pick up time and time again. I often found myself skipping past the text to look at the great images of the original fanzines which had been carefully created in the suburban bedrooms across the length and breadth of Britain.

Founding Sex Pistol Glen Matlock said, ‘Fanzines were the building blocks of punk,’ and he’s right. Despite being designed to be disposable and ‘of the moment’ but have become a valuable cultural resource; more so than the sanitised standard history books. They tell the real story, from real people and capture the moments as they happened.

You can buy the book from Omnibus Press