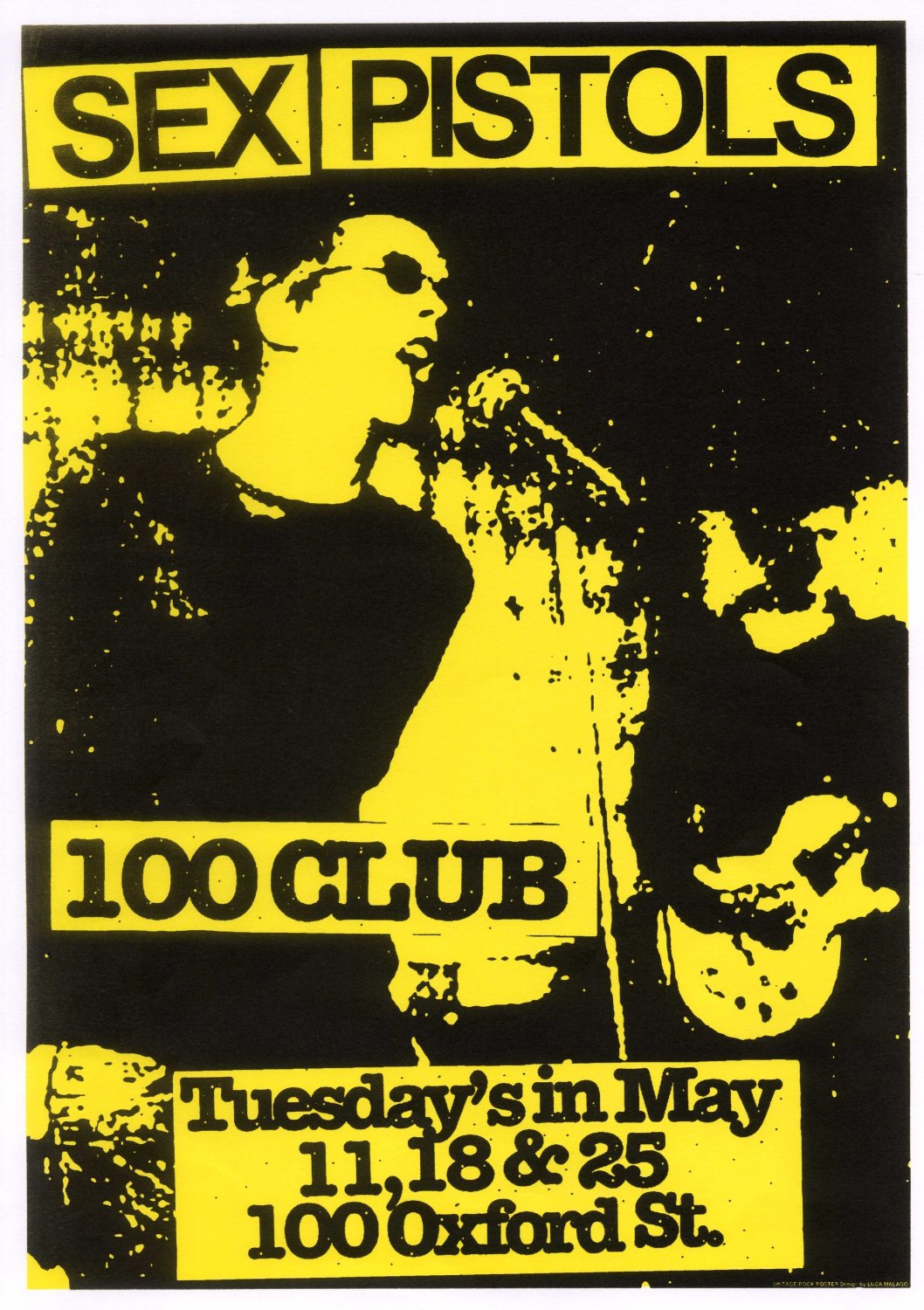 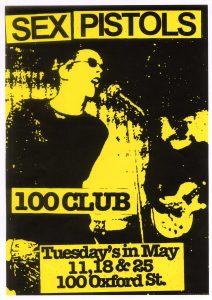 The seventies had been great. Glam rock for us teens had ruled the roost but even that had seemed to have disappeared. This was the first time that pop culture had seemed retro and to be going backwards.

The charts had been full of Beatles singles- rereleased in snazzy new picture sleeves and even if they were great it felt like the past was already catching up with us. Pop was stating to eat itself.

Every generation needs its own soundtrack. Still does.

The sixties could have been Victorian times for a 15 year old in 1976 and we were wondering what our soundtrack was. Even gangling, goofy nerds like us needed some music of our own.

That Tuesday night the Sex Pistols started their 4 week residency at the legendary 100 Club. Booked to appear by promoter Ron Watts who had already had the band play at High Wycombe the band now six months into their ‘career’ were already the fully finished article

The late Nils Stevenson was by now working with the band and had already seen them play a few months before.

‘One day Malcolm suggested I come and see the band he was managing, the Sex Pistols. I went down with him, Vivienne, Chrissie Hynde and Jordan, in Viv’s puke-green Mini. I was hooked. They reminded me of Iggy and the Stooges. There were no more than 100 people there. They were all there for Eddie and the Hot Rods bar the Sex shop crew: five of us and Steve Severin and whoever he was with. All together, ten people to see the Pistols. I saw them play once, and by the next gig I was working for them. I closed down my stall on the Kings Road, and the following week we were working from Malcolm and Vivienne’s flat designing posters, until he had a ruck with Vivienne and moved in with Helen Wellington-Lloyd who became our secretary/co-designer. It all happened really fast.’

John broke the PA at the Eddie and the Hot Rods gig. He didn’t like the sound of his voice.

When we first saw them there was no one there at all, about 30 to 40 people. That was for the main band, Eddie and the Hot Rods. The Pistols were the support band. We went by while the PA was getting smashed up, that was what drew us in. We were in the West End looking for gigs to go to. We walked up Wardour Street and we heard a big kerfuffle going. We thought, “What’s going on in there?” We went in. The Sex Pistols had already done a few numbers, so we saw the tail end of it. It looked like they were getting thrown out of the place! We were desperate to find out when they were playing next. We kept going to gigs finding out when the next one was.

After the Pistols at the Marquee, we went to every gig in London. It was very rough-sounding, nothing like what they turned out to be. They made a lot of errors. They did all the Sixties numbers. That’s what got Rob Simmons into them. What I liked about them was that they looked nothing like the Sixties. I wasn’t into that Sixties thing so much. I liked the sound of it but I didn’t want it to be a band doing just Sixties stuff. They had a New York Dolls type of sound. They were the only group that was anything like that at the time