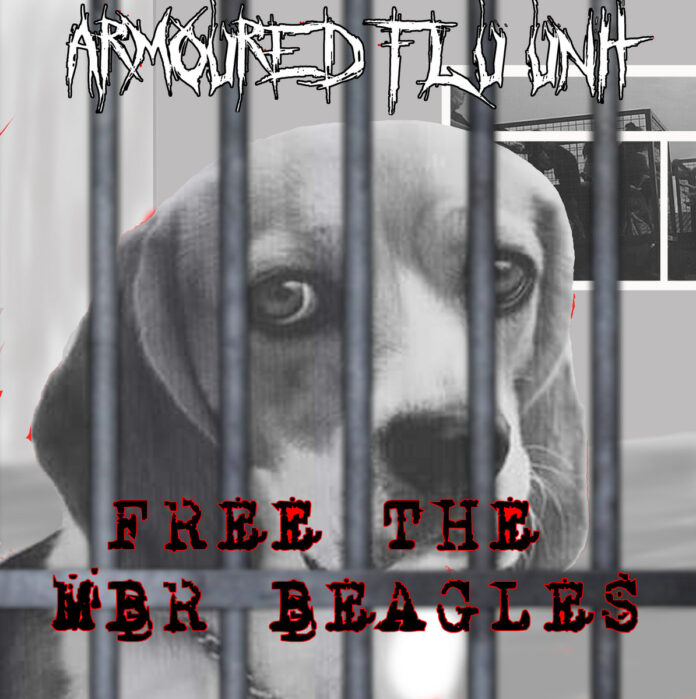 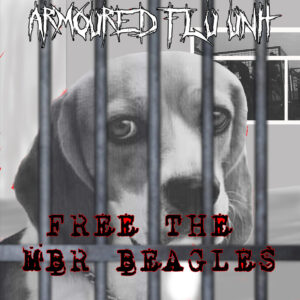 Yes, Vivisection on purpose-bred animals is still an issue in 2022 !

South coast DIY activist punks Armoured Flu Unit have released a digital single and video to highlight the plight of beagles being bred to supply the vivisection industry. Using their own brand of “Dis-core meets Crust Anarcho” as a platform they aim to increase awareness in the punk community of a campaign to shut down beagle breeding site MBR Acres.

it is 2022 –  and who would have thought that this is STILL necessary!

The British Union for the Abolition of Vivisection was founded in 1898 by Irish writer and suffragette, Frances Power Cobbe. It was registered as a company in the UK in 1929.

It was the ‘To A Nation of Animal Lovers’ EP by anarcho-punk band Conflict (who included Steve Ignorant from Crass at that time) released in 1983 which perhaps brought the issue of Animal Rights to the forefront on many a punks mind. Punk had evolved from ‘We don’t care’ to ‘why don’t YOU care?’ and the music had  found a purpose.  Human Freedom, Animal Rights , One Struggle, One Fight.

“A lot of people think vivisection is history but there are still things called ‘regulatory tests’ – testing how poisonous things like fertiliser are. Beagles are being bred in horrendous conditions before being experimented on and their corpses discarded. It took me a while to catch on with what was happening at MBR Acres and the campaign to stop them. I figured we need to spread the word. This spurred me on to write a song.”

“The song was going to feature on our new album called The Mighty Roar, coming out on Grow Your Own Records. However, pressing plant issues are leading to delays of 9 months or more. We really hope that by the time the album comes out, MBR Acres will be shut. There is no point in delaying our message when it is needed now. So we recorded 2 versions of the song – one about the use of beagles in general which will feature on the album and the other specifically about MBR Acres for immediate release.”

“Whilst we are great believers in the power of punk to change the world, these days it is more granular. We know that our band and our song isn’t going to make that much difference to MBR and vivisection in general. We also know that our influence is small, especially compared to the likes of [celebrities] Peter Egan, Ricky Gervais and even Will Young, who chained himself to the gate at MBR. But we want to spark conversations in the punk community about this issue. Even if only a small number of people get involved with the campaign or raise funds for it then we will have achieved something.”

So… spread the word.  Even if you think the song is a horrible fuckin’ racket, the issue is what is important.

You can hear or buy the track on bandcamp with all proceeds going to the campaign.

The Free The MBR Beagles campaign has a Facebook page

Armoured Flu Unit can also be found on Facebook.

So what is all this ‘Crass Songs at Butlins?‘ It’s what’s called Clickbait – a hook line to grab the attention of a ‘target readership’.

Steve Ignorant and his band did indeed play Crass songs at the ‘Great British Alternative Weekender’ in Minehead at the Butlins camp recently.  It is a strange irony perhaps for those songs to be blasted out at a holiday camp – but it’s 2022 and things can’t get much weirder! And in the words of the song:  So What.  Steve can play where-ever he likes and whatever he likes.

Any complaints about the clickbait idea to Ged Babey not AFU or Steve.