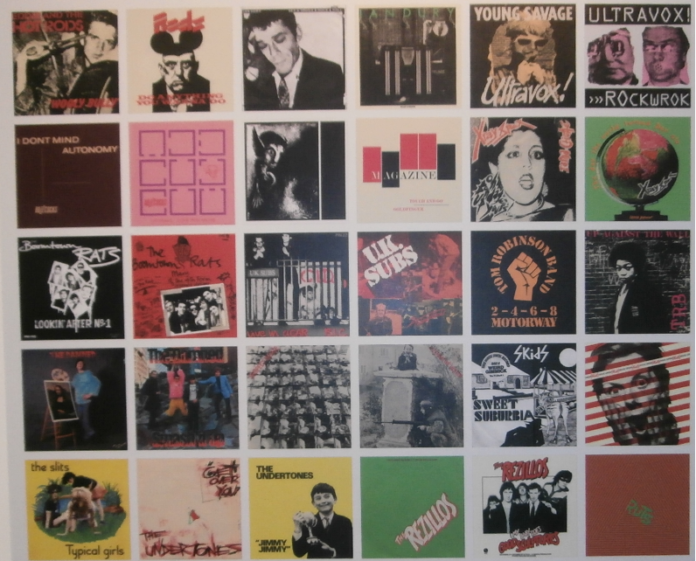 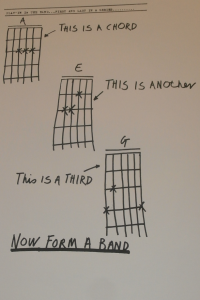 Punk Rock!! So What?

The blurb for this exhibition says that it “features a range of punk graphic and visual material spanning the past forty years, demonstrating connections, stylistic conventions, patterns of engagement and the evolution of punk’s visual language and identity across diverse regions and cultures.” The exhibition is an accompaniment to the second annual Punk Scholars Network annual conference and symposium at Birmingham City University on 29th and 30th October.

So we have the visual iconography of punk, lovingly presented by curator Russ Bestley from his own record collection and assorted ephemera, the missing word from all the intellectual theorizing is celebration. Because for those of us of a certain age and with a certain type of record collection that’s what this is. 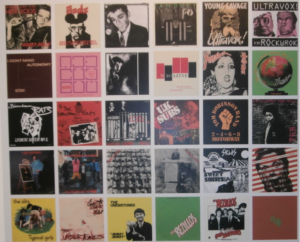 The superb collages of 7” record sleeves make the point that strong themes and styles quickly emerged, identifying punk’s sub-genres. In particular the anarcho-punk singles which follow a line from the harsh black and white, cut and paste style of the fanzines, that were the first expressions of so many who went on to become writers or designers.

The exhibition works as a testament to the stark visual change that came with dismantling of music as the preserve of virtuoso soloists, slick Adult Orientated Rock and lyrics that as someone once said “say nothing to me about my life.” 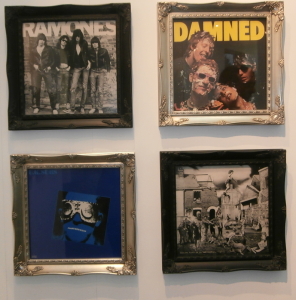 But it also works as a celebration of the high and low art that was so much a part of the record buying experience when 7” singles were the freshest, most vital form of communication.

Where Punk Rock!! So What? really works is giving equal billing to some of the less obvious – the second division, if you will – bands, whose moment in the limelight was brief individually, but the collective effect of so many bands, from every town and city, gave punk rock it’s momentum.

So the likes of The Disco Zombies, The Tights, the Notsensibles and Desperate Bicycles, can be found alongside Ultravox, Plastic Bertrand, Eddie and the Hot Rods and The Boomtown Rats. None of whom would make a best of punk collection, on almost any criteria you care to mention.  Along with The Jam and The Stranglers – also represented here – some would argue shouldn’t even be in a Punk Rock exhibition at all. 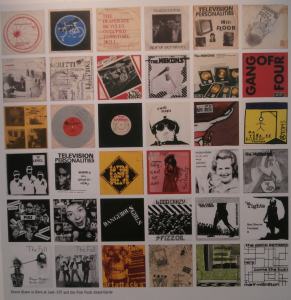 Which is why this exhibition works. It’s personal. It reflects the glorious confusion of weekly trips to your local independent record shop and coming home with, well sometimes, whatever it was they had. Not quite knowing what was punk and sometimes taking a punt on an interesting sleeve.

If names like Barney Bubbles, Savage Pencil, Jamie Reid, Mike Coles, Peter Saville and Malcolm Garrett mean anything to you, then you’re probably already going to this if you live anywhere in the Midlands. If not but you started buying punk rock records in the late 70s and early 80s and have an hour to kill in Birmingham, get down to the Parkside Gallery. The address is Cardigan Street, but until 13th November, it really ought to be Memory Lane.

Punk Rock!! So What? Is open to the public from Monday 21 September to Friday 13 November at Parkside Building, 5 Cardigan Street, Birmingham, B4 7DB

The Punk Scholars Network Conference and Symposium is at Birmingham City University, 29 & 30 October

All words by macthehack, part time punk (retired), sometime freelance scribbler on music, sport and television, when not trying to hold down a day job. Jaundiced views and biased rants available on an irregular basis at teatoastrockroll.blogspot