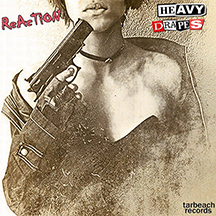 Make way for the New Wave of Punk Rock and Roll!

Punk rock n roll maybe a graveyard of ambition littered with a thousand bands but there had to be a day when someone actually got it right. This split single could be that moment that manages to combine the best point of both forms and transcends the term with two veteran Scottish bands at the top of their game with a stunning release.

Heavy Drapes– Into the Blue

The two most talked about bands in the punk scene this year together on one blood-red slab of 7” vinyl in very limited edition!

Reaction, originally around in the initial punk rock maelstrom, reformed in 2014 and last years debut album “Accelerator” garnered incredible praise from critics across the spectrum. With coverage in Vive Le Rock and elsewhere, Reaction certainly believe in leaving it late before making an impact. This song is a chanting rush of power about the wayward millionaires daughter who turned terrorist in the seventies.

Heavy Drapes from Edinburgh are also punk veterans and their “Should I Suck Or Should I Blow” EP gained many admirers with press and radio coverage and created a huge buzz about their upcoming debut album.

Both bands played at Rebellion Festival this year- Reaction pulling several hundred despite their early slot and Heavy Drapes were possibly one of the “water cooler” moments of the festival with people still talking about their Sunday evening set which is due to appear in the upcoming Rebellion movie.

Despite being separated by the length of the M8 motorway and not having met before, it’s quite extraordinary how both bands have independently being forging a similar path; both groups were sick of the turgid, punk-by-numbers scene and the lack of substance, style and panache and both are fired by the need to make punk rock sexy and dangerous and, y’know, a bit rock ‘n’ roll again.