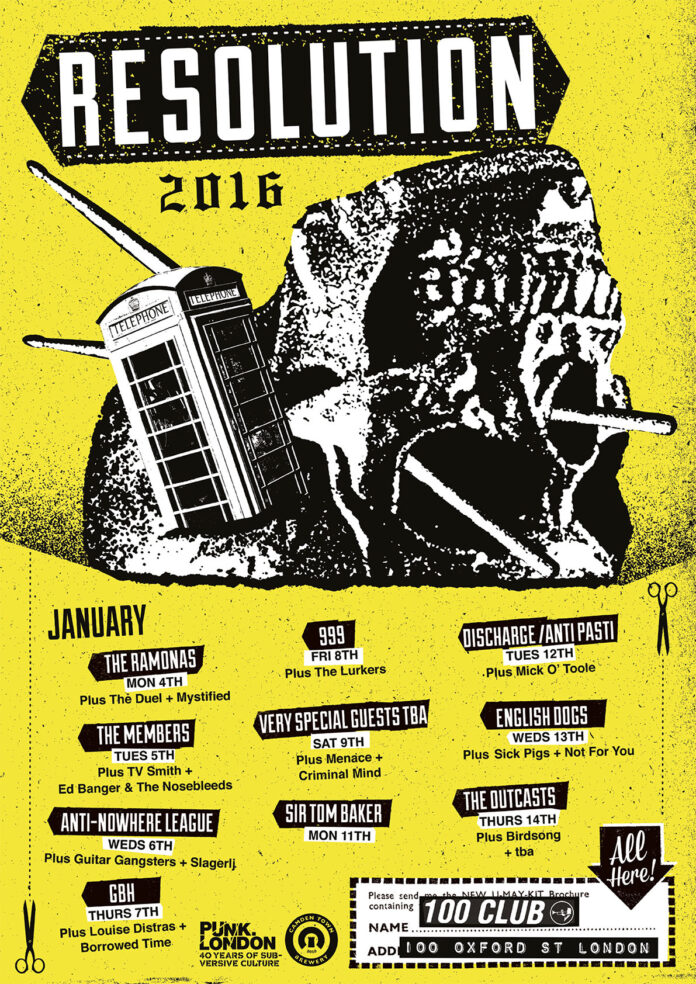 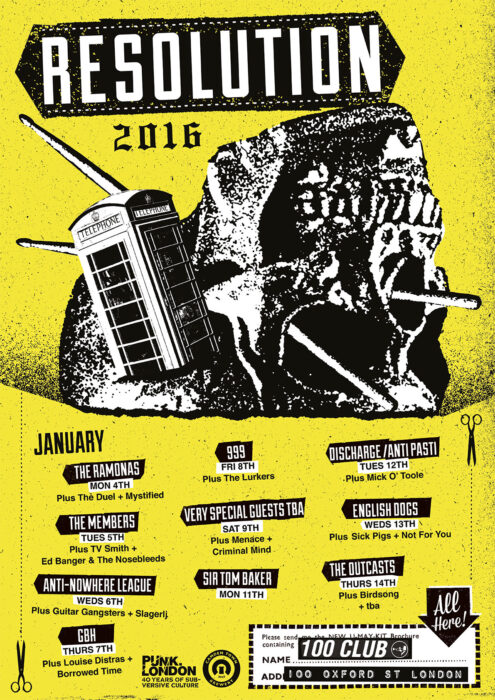 Punk. London. 40 Years of Subversive Culture: 2016, year-long festival is “supported by the Mayor of London” and funded by Lottery Grant. Is this in the spirit of punk itself asks Ged Babey…

You don’t believe us?  Have a look at the website here

London to celebrate 40 years of punk culture in 2016

London’s leading cultural venues announce plans to celebrate the legacy and continuing influence of London’s punk scene throughout 2016.
Live gigs, talks, films, exhibitions and museum displays are all part of a year-long celebration of subversive culture.

Not only will punk’s roots in London be explored, but also its on-going influence on modern day culture and society, from fashion to film, politics to identity, and of course music.

Punk London will kick off with the Resolution Festival from 4 to 14 January 2016 at The 100 Club, the world-renowned music venue that hosted the legendary two-day 100 Club Punk Festival in September 1976.

Reflecting that there is as much interest in punks today as there was in 1976, Punk London has received a £99,000 grant from the Heritage Lottery Fund (HLF). Stuart Hobley, Head of HLF London said:

“Punk smashed its way onto the UK’s music scene in the 70s, with its base largely in London, and profoundly changed not only music but art, fashion and culture forever, giving many disillusioned young people a voice for the first time. Punk is as iconic to the UK’s heritage story as Stonehenge and the British Museum and we’re delighted to support the Punk London cultural programme and want to encourage people across the country to celebrate their own punk heritage in 2016.”

Punk London is supported by the Mayor of London.

Thanks to National Lottery players, we invest money to help people across the UK explore, enjoy and protect the heritage they care about – from the archaeology under our feet to the historic parks and buildings we love, from precious memories and collections to rare wildlife. www.hlf.org.uk @heritagelottery

Significantly, the 100 Club website page for the Resolution 2016 gigs makes no mention of the Mayor or Lottery involvement.

In 1977  Punk was regarded as “a bigger threat to our way of life than hyper-inflation and Russian Communism” according to one Establishment rentaquote (and used in TV special Brass Tacks).

The slogan “Germany got Baader-Meinhof, England got punk,” appears on the sleeve of Crass ‘The Feeding Of The Five Thousand’ reissue (although I cannot remember where it originated.)

These two quotes alone, and any dictionary definition of punk as being ‘anti-establishment’ alone should be set in stark relief against the fact that Punk. London is “supported by the Lord Mayor of London” currently Boris Johnson, a floppy haired Tory buffoon on the face of it, but a dangerously ambitious politician authoritarian underneath.

Punk has always had contradictions at its heart but being assimilated into the Establishment and Heritage Culture is just plain wrong, isn’t it?

On the Official Website – click on DO IT YOURSELF and the link is pages and pages of red-taped form-filling to try and apply for a Lottery Heritage Grant! The exact OPPOSITE of doing it yourself.

The “Year Long Festival” is kicked off by gigs at the 100 Club and there are some familiar names there. Are the artists playing ‘betraying punks legacy’ by taking part in an event ‘supported by’ Boris ?  Did they even know about his involvement?

They are all invited, cordially, to put their side to Louder Than War….

But,  looking at it from a practical commonsense standpoint, these are all decent working musicians, trying to earn a living in hard times; why shouldn’t they play, get paid, take the piss and ‘celebrate’ Punks 40th anniversary…?

Punk means or meant, so much, and so many different things to a wide cross-section of people involved or on the fringes…. there is a world of difference between a 1976 London Punk,  a 1980 provincial Crass punk and a Green Day fan…. Punk meant EVERYTHING to many…. Punk saved lives, created careers, changed outlooks, created opportunities, and maybe Punk FAILED to change anything at all….

Punks ‘Utopian Heresies are its gift to the world’ (c) Jon Savage – but do NOT belong to Boris Johnson and shouldn’t be included on his CV to be trotted out at Election time as a token example of his diverse agenda.

Or  is it ‘Only Rock’n’Roll and was punk  just ‘a series of shock slogans and token tantrums’?  Two slogans from Punks later incarnations, Riot Grrrl and the New Wave of New Wave seem to apply perfectly.  Huggy Bears  ‘THIS IS HAPPENING WITHOUT YOUR PERMISSION and S*M*A*S*H’s  WHOEVER IS IN POWER, I’LL BE THE OPPOSITION.

Punk’s 40th Anniversary should, of course, be celebrated and does have huge cultural value and importance, but does punk want or need the support of Boris?   We are pretty sure that the support is not a mutual thing.

Let us know what you think.

All words Ged Babey for Louder Than War