Deep in the heart of the East Midlands lives a fox. A punk fox, responsible for a pretty flawless run of seven-inch singles that are creating a real word-of-mouth buzz. Glenn Airey hunts him down.

It was Mark E Smith, many years ago, who pointed out that ‘the best firms advertise the least,’ and a good example of this is Leicester’s Punk Fox record label. You might have come across the name if you’ve had your ear to the ground, but you certainly won’t have seen it emblazoned on any billboards, or even websites: ‘Punk Fox do not have a corporate money grabbing website,’ began their first press release/mission statement, ‘are not on Facebook or MySpace and do not tweet’.

The label is vinyl only (‘although we have relented to some pressure and may include a CDR of the tracks for you non-music fans in the media’). Talk about attitude. But is it a righteous adherence to principle or counter-productive arrogance? Actually, it’s as much for practical reasons as anything: the label’s main man Chris Garland admits he hates seeing out-of-date websites and couldn’t promise not to fall into the same trap. Besides, the internet is a bloody big place and he can always rely on retailers, bloggers and bands to put the news out there for him. Rather like I’m doing now, I suppose, and I wouldn’t be bothering if the records weren’t universally excellent, and beautifully manufactured to boot. Seven-inch only, limited numbers, word-of-mouth marketing, coloured/patterned vinyl and strict rules on packaging – Punk Fox is a collector’s dream. Advice on how to get hold of the things later, but first a quick run through of the seven releases to date. 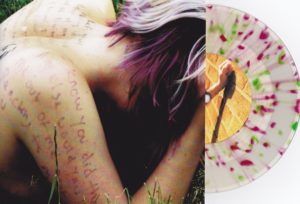 First out of the blocks are Flying Kangaroo Alliance with Hit The Wall/Wasted (XOF001). This Leicester quartet is perhaps the most ‘rock’ outfit to have featured on the label to date. They’re grunge children with genuine songwriting chops and, across these two tracks, impassioned vocalist Meri Everitt strikes just the right balance between ‘defiant in the face of adversity’ and ‘unspeakably pissed off.’ She’s got a heck of a voice. Alanis, Polly Harvey and Hole are among the acts that FKA namecheck but for me another valid comparison is Throwing Muses, which can clearly only be a good thing. Compliments to the absolutely thunderous drumming on Wasted, by the way. I’m told there’s a mere handful of these left so look lively if you’d like one. Vinyl: translucent purple and green splatter. 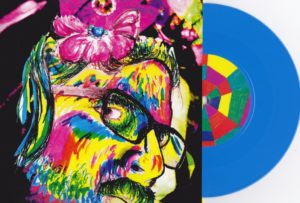 The Pale Faces serve up the undoubted curiosity of the early Punk Fox catalogue with Guru/Nature Calls (XOF002). Combining locked-groove stoner basslines with squalling keyboards and the improvised, free-form vocals of Janice Raw, the band come on like a heaven-sent hybrid of Hawkwind, The Slits and early Fall. Only more weird than that. ‘Believe! I can help you heal your soul!’ implores Janice, who is no doubt as honest as the day is long, but since this record is as marvellously unsettling as an O Superman or a There Goes Concorde Again, relaxation and tranquillity really aren’t on the menu right now. Comes complete with an equally lovable 9-track DVD, believe it or not. Vinyl: solid powder blue. 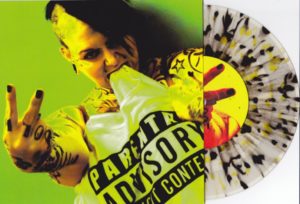 Last in a trilogy of Punk Fox singles by Leicester bands is Boyfriend by ist (XOF003). Over ten years since it first appeared on their debut album, singer/songwriter Kenton Hall and pals finally agreed last year to unleash this deeply sweary ditty on the seven-inch format. ‘I hate your fucking boyfriend, your boyfriend is a cunt’ is just one standout line among a litany of unpleasantness. Must we fling this filth at our pop kids? Frankly, when the riff is as irresistible as this, then yes we must. It might teach them a thing or two. Chris advises that an unsurprising shortage of radio play means he still has quite a few of these left, so fill your boots because it’s terrific. Vinyl: translucent black and yellow splatter. 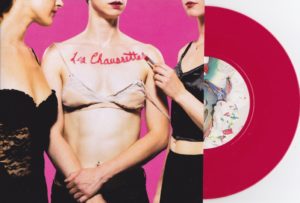 A geographical departure next, all the way to Vancouver in fact, for Les Chaussettes and their splendid double-A side Kate/Volcanoes (XOF004). Even if it isn’t officially a double-A side, that’s what I’m calling it because it’s impossible to manoeuvre a Rizla between the tracks quality-wise. Cleverly constructed but still instantly memorable, they promise even greater things to come from this girl group trapped inside a garage band. Smoke-in-your-eyes vocals lend a sultry air to Kate, whose keyboard embellishments evoke the Doorsy/96 Tears side of the 60s prism, while the way Volcanoes eventually bursts its pop banks into a full-on psychedelic delta is a thing to behold. More Chaussettes action is expected soon on Punk Fox, so don’t wander off. Vinyl: solid lipstick pink. 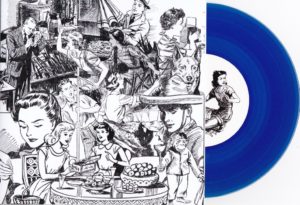 Staying up in the higher latitudes (Leeds) it’s Nervous Twitch time! I wrote about their Punk Fox EP Johnny’s Got A Gun (XOF005) back in April and you can find that review here to save me repeating myself. I can tell you I’m still playing This Modern World to death, though. Word on the street is they’ll be making a welcome reappearance on the label before too long, so again stay tuned. Vinyl: the deepest azure. Really nice. 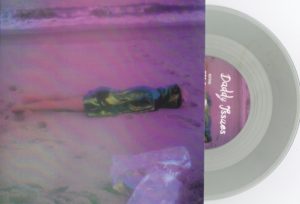 The Punk Fox sure gets around and for XOF006 he legs it all the way to North Carolina to hook up with the mighty Daddy Issues. Their song titles So Hard and Sex on the Beach might lead you to expect frank, adult subject matter and, well, you’d be right. Put it this way, these girls are not singing about cocktails. And a tendency toward the risqué isn’t all they have in common with the Vaselines, because these songs are as catchy as Son of a Gun or any of Frances and Eugene’s old classics. Tub-thumping surf drums, twangy guitars and deceptively angelic wooh-woohs all add up to a massive win-fest, so it’s no wonder this one’s been flying out of Rough Trade. Investigate and purchase now, is my advice. Vinyl: bottle green (as in see-through). 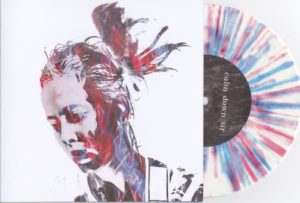 To bring us right up to date, the latest Punk Fox release – out on Sept 7th – is Belgian dark-pop trio High Hi with their double-header Calm Down Sir/Tommy (XOF007). By all accounts, they’ve morphed from a regular indie outfit into their much moodier current form and sound all the better for it. Calm Down Sir is largely instrumental and actually very basic but the driving rhythm section and crashing chords conjure up something genuinely elemental and I can see why Sigur Ros have been referenced in some quarters, if not why there are quite so many bras in the video. Tommy is more traditionally structured and its dramatic twists and turns will appeal hugely to fans of Xmal Deutschland or the early Cocteau Twins. Definitely a band to watch. Vinyl: you’ve dropped your Mr Whippy with hundreds and thousands then trod on it.

And that’s your lot for now although, as I’ve noted above, we can hopefully expect follow-ups from at least a couple of the aforementioned bands. Existing releases should be available from the best indie retailers like Rough Trade in London and Jumbo in Leeds, and you can always have a snoop on Discogs or 45cat.com to see what you can find, Punk Fox being listed on both sites. The individual bands’ websites are obviously a good place for a shopping spree too. Failing that, give the man himself a shout at chris.punkfox@gmail.com. He’ll be happy to hear from you, concerning his label or indeed the development of the bands thereon. It’s all about the music, says our man of mystery. A proper punk.