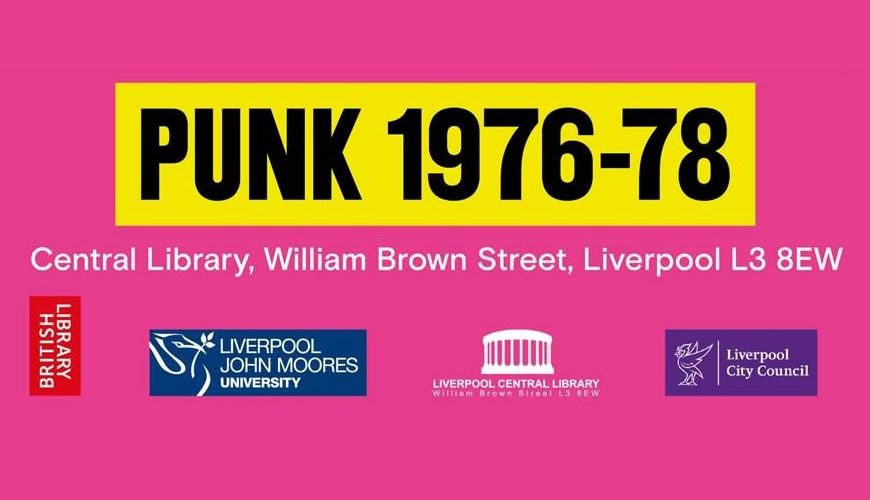 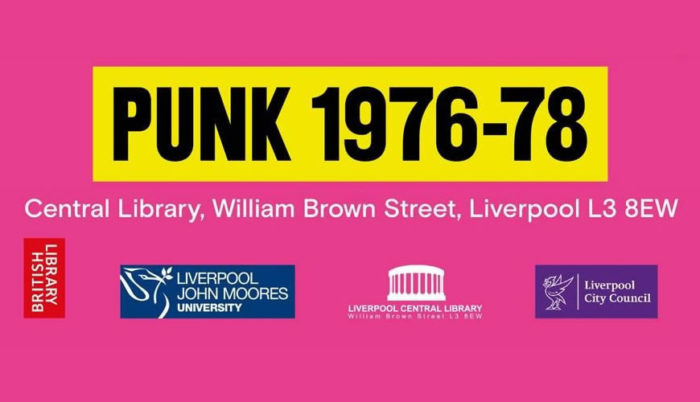 Documenting the rise of punk rock in Britain from 1976 to 1978 Liverpool’s Central Library plays host to a unique exhibition of memorabilia and music. Punk 1976-78 opened its doors to the public today. Nigel from Louder Than War was invited to the opening with a sneak preview of the exhibits with special guests invited along to tell us how it all came together.

This is the third edition of the exhibition which started at the British Library in London in 2016, moving to Sunderland Museum in 2017 and finally now to Liverpool. Curated by Professor Colin Fallows from Liverpool John Moores University with Steve Cleary and Andy Linehan from The British Library.

. The University has a world-class repository of counterculture with the biggest punk archive in the world

“The intention is to draw people’s attention to the idea that a library is not just about books. We have an incredible collection of sound recordings, interviews documentaries and speeches, all which is information about the music and related to all the recordings that we have.

This exhibition, we hope will tell people that all this sort of material is available for study, for enjoyment in the British Library, and we try to make it as accessible as possible within the copyright laws that we a have.”

Colin Fallows briefly interviewed Ex Yachts and It’s Immaterial frontman John Campbell who made an infamous ‘Don’t Make Me Laugh’ comical flyer (Which is exhibited) for the first Pistols gig at Eric’s in October 1976.

“We’d heard of these cells of energy going on like in New York and The New York Dolls and in London with pub rock. Bands like Starry Eyed (and Laughing) and Brinsley Swartz. We looked at bands like Eddie & The Hot Rods; there was an energy and attitude which later on became part of punk.

We’d heard of this kind of aggression and attitude the Sex Pistols were going to bring. For me having seen them in London it was kind of the attitude you might see in a lot of comedy at the time. It was more slapstick, with roots in British sitcom and maybe strip cartoons. When we made the flyer it was of the idea of ‘Punk, don’t make me laugh’, but it did make us laugh and it was one of the big things about it”

“One of the aspects that gets lost in the media interpretations is the comedy… the tradition that the roots were early 20th century movements such as Da Da which again, had a real comedic element. When I would go to SEX (Vivienne and Malcolm’s fashion shop on the King’s Rd) in ’75/76 it was really small and looked very like an installation space in a gallery. There was hardly any stock and what was there was really expensive. It gave it this kind of artistic atmosphere and, being at Art School at the time, it was easy to draw those lines between Futurism Da Da, and Punk.” 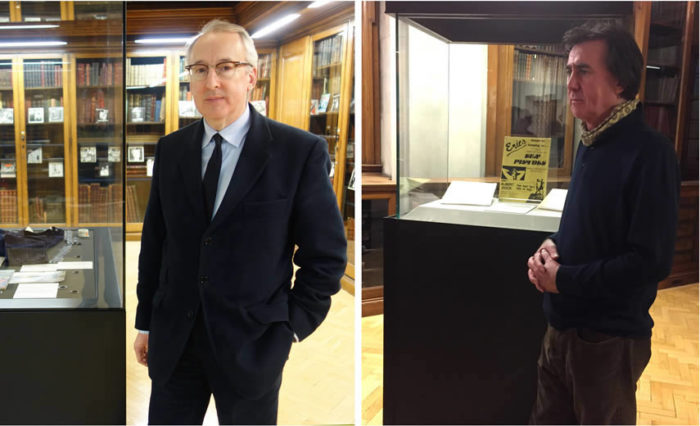 “The other element is that when Sex Pistols played at the Free Trade Hall in Manchester, Manchester music changed forever, whereas in Liverpool we have the irreverent flyer and poster saying ‘Don’t make me laugh’, so there is a kind of cultural difference – and a contradiction to accepted history.”

“When they played at Eric’s which was The Gatsby club upstairs, they were framed differently, a lower stage, the other side of an empty dance floor so you could see a different thing, a music hall tradition. There could be a bit of Little Tich in there which is why I think they were seen differently in Liverpool to the way they were seen in Manchester.”

“A number of Sex Pistols early performances were either at Art Schools or unlikely venues like strip clubs in SoHo and other carefully chosen venues, which presented them almost as if they were an artwork in an installation space.” 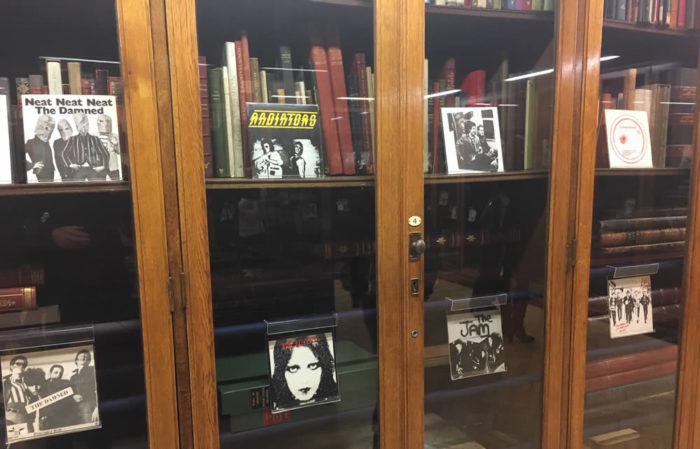 The exhibition is split over three rooms at the Library. In the foyer, there is a timeline of British punk which opens into the main room which features Peter Frame’s family trees and memorabilia from iconic local club Eric’s. As important as Manchester’s Electric Circus, Eric’s played host to hundreds of punk gigs during the period including that iconic appearance on October 15 1976 .

The music archive room features original copies of punk singles, many of them real rarities, such as 7” records by The Drones, Ed Banger & The Nosebleeds and The Panik. You can listen to all of them at the audio stations. The room also features some original clothing including Rat Scabies‘ leather jacket! Steve Cleary told me how they actively went out to fill the collection, paying £250 for A Factory Sample! 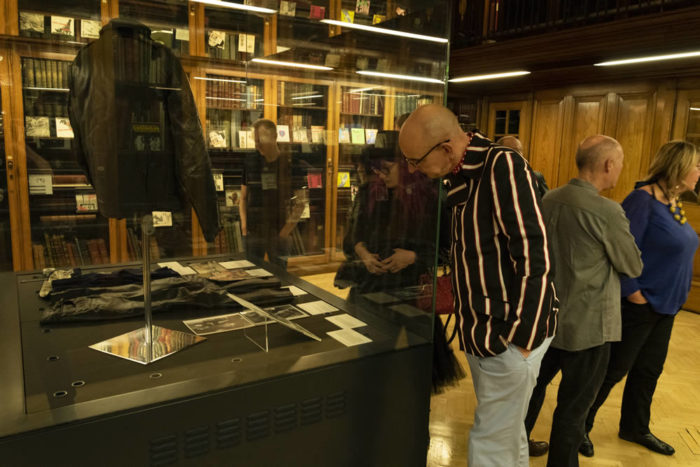 A corridor connects the music archive to the largest room part of the Hornby library section of the building which is packed with mostly unseen memorabilia. Original posters share wall space with photographs (Including the iconic Jordan in front of SEX), cabinets containing some of the earliest punk ephemera. Copies of Sniffing Glue, the only copy of Anarchy In The UK magazine, handwritten lyrics and John Peel’s personal copy of The Undertones’ Teenage Kicks!

PT Madden took the first photos of The Sex Pistols 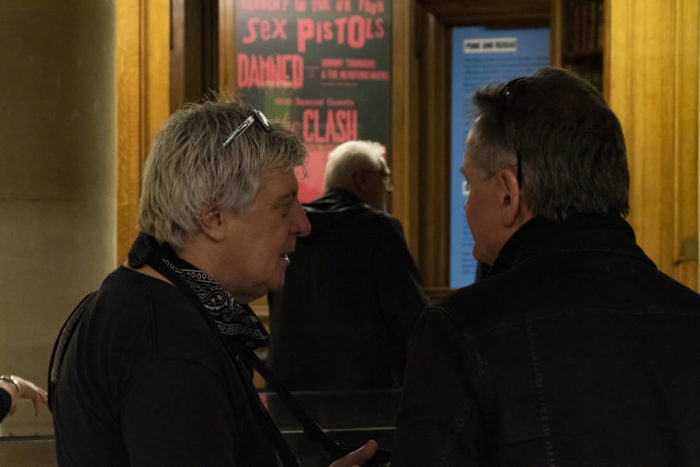 The corridor features the earliest photographs of The Sex Pistols and The Slits lining the walls. I spoke with PT. Madden who attended the first Pistols gig at St Martins College in November 1975. The following April he positioned his camera in front of the stage at The Nashville and took the very first photographs of the band.

“John was a Krautrock hippie, he liked Amon Düül and Captain Beefheart, but Steve, Paul and Glen were mods; they listened to the Kinks, The Who and The Yardbirds” “I remember one gig, March 30th ‘76 which was when John walked off stage.  I said to Steve, ‘When’s the next gig?  and he said ‘at The Nashville on Saturday’.  I was one of just ten people in the audience and I thought they were going to be important.” 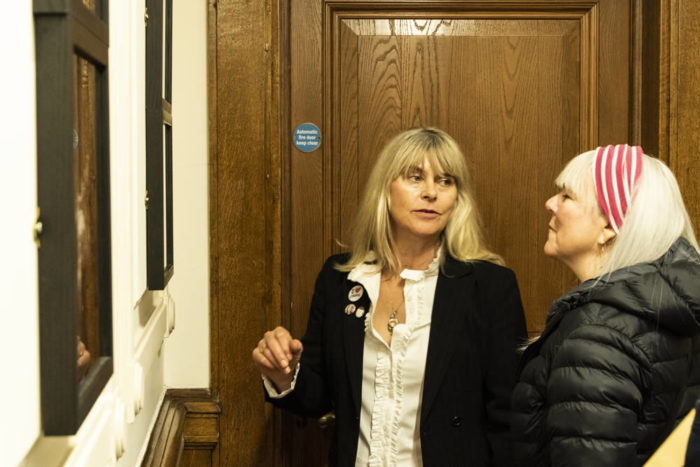 Emma Harrison who was at Art College at the time took The Slits photos:

“We used to go in to Let It Rock (which became SEX) as a dare, but we were kids. We’d bunk off and we’d get kicked out and shouted at! I met Ari (Ari Up) at a bus stop and we bonded. The gig was 1976 because my ’76 diary is missing, and the gig isn’t in my 1977 one! I didn’t even print them up (The photographs) because I couldn’t afford the paper, it’s that simple. I didn’t even know I had them. I thought I’d just go through all these negs I had at college and one of the pages said, ‘The Slits’ and I went ‘No Way!’ This is the first time they have ever been printed, apart from a run at Snappy Snaps I did because I was curious to see what they looked like!” 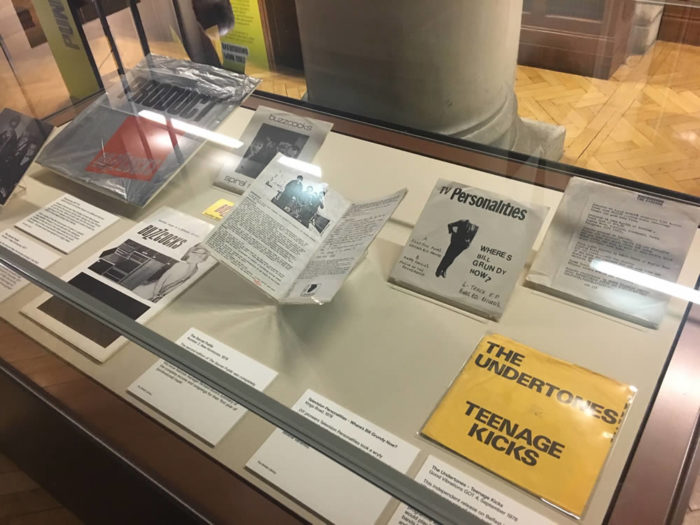 More complete than any punk exhibition I have been to this is a must for anyone wishing to reminisce or learn more about British punk and its origins.

Punk 1976-78 is on at Central Library, Liverpool – William Brown Street – It runs until January 13 except bank holidays and entrance is free.

(For more quality writing please join the Louder Than War facebook page. Thanks!