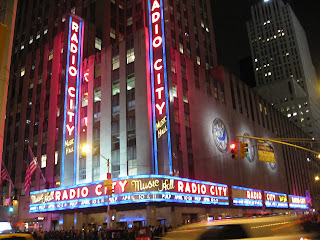 Pulp’s 2 night stint in New York last week took place in a city landmark, home of the Rockettes, and the USA’s ‘showplace of the nation’ – The Radio City Music Hall. Just wandering into the grand foyer was an experience, gazing up at the opulent 60 foot high ceiling festooned with chandeliers, a lavishly draped art deco delight of elegant, ornately mirrored walls. This breath-taking space seemed the perfect backdrop for a band with the drama and heart of Pulp, returning triumphantly after an absence of 14 years…

First on was the funny and self-effacing observational songwriter and cartoonist Jeffrey Lewis, hailed by Jarvis as “The best lyricist working in the US today”.Lewis first came to my attention for his humourous low budget video “The Legend of The Fall”, which brilliantly traces the rise of the band’s humble beginnings from the appearance of ‘a young dock clerk named Mark E. Smith’ in 1976 to perennial John Peel favourites, with fantastic drawings.

Normally holding open a dog-eared sketch pad for illustrated accompaniment to his songs, tonight he had his hands free as the huge RCMH monitor screens played a slideshow of his drawings for his 2 minute “French Revolution” documentary, and fan favourite “Creeping Brain”, an outlandish horror tale where an enterprising and hungry brain eats everything until it is large enough to take over the world.

Other songs included the irresistible pop hooks of “Broken Broken Broken Heart”, as well as “Time Trades” from his latest album A Turn In the Dream Songs, a poignant slice of truth that had me quietly pondering my own choices and possibilities for the future. Show stealer had to be “Williamsburg Will Oldham Horror”, ranked number 47 in Time Out New York’s list of 100 best NYC songs (bizarrely overstepped by the likes of Jay-Z and Barry Manilow!), where Jeffrey Lewis confronts the enigmatic singer on the L train in an encounter that ends in a violent homosexual rape fantasy.

Soon the lights drop again and the anticipation is palpable in the historic theater as green laser beams scroll teasing messages to the pumped up crowd, “Shall we do it?”, then a robotic voice recites the blurb from “Mis-Shapes”, a kind of empowering outsider manifesto – “We don’t want no trouble. We just want the right to be different. That’s all.” Jarvis appears straddling the risers in his Cuban heeled boots and skinny suit, throwing candy bars into the audience like some kind of sexy librarian Easter bunny.

At this point the reek of marijuana begins to permeate the room with an earthy sweet marinade, and the synchronised fist pumping begins in earnest as Pulp springs alive with a surging and propulsive “Do You Remember the First Time?”, Cocker’s wiry frame thrashing in a series of jerky hip sways, his floppy hair flying and two fingers sweeping across his eyes, Saturday Night Fever style. 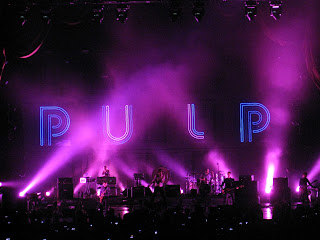 The stage is then bathed in an acid green for “Monday Morning”, and Jarvis seems to be shouting into a large tin can telephone, “Why live in the world when you can live in your head?” Cocker then segues into “Razzmatazz” by way of a surreal monologue incorporating a history lesson of the venue before trailing off into a beautiful free form ramble about “glitter, isotopes and amino acids”. He shimmies and scissor kicks and utters some well-timed breezily exhaled “aaaahhhh”s as the band confidently bounces away behind him.

If there’s little mention of the Pulp backing band, it is because Jarvis himself is such a presence; it was almost impossible to take my eyes off him. The stage was arranged in a tiered format, the top layer featuring Candida manning the keyboard setup and Nick Banks on drums, bottom level was Steve Mackey on bass and Mark Webber on guitar. Cocker also occasionally banged on a big stand-alone bass drum with a mallet for some extra improvisational percussion.

“Pencil Skirt” followed, with Jarvis scrutinising the crowd and deciding that the concert was also doubling for “the pencil skirt convention of North America”, as so many fans had dressed up in homage to the track.We were treated to the big love ballad from Different Class, “Something Changed”, which was dedicated to a newly married couple in the audience, the euphoric sing-along of “Disco 2000”, where a spotlight followed Jarvis as he climbed the rafters, and a laser light strewn rave for the dance and drug scene song “Sorted For E’s and Wizz”. 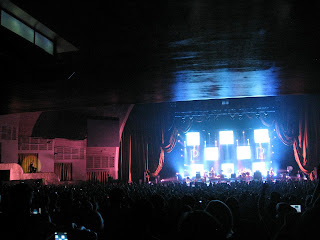 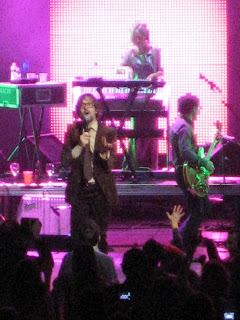 “F.E.E.L.I.N.G.C.A.L.L.E.D.L.O.V.E.” was presented with an odd stiff ballet by a black clad dance troupe rushing from one end of the stage to the other, while “I Spy” saw the multiple screen stage backdrop displaying a video camera feed of excited faces in the crowd before taking a plunge past Cocker’s bearded chin and down towards his tonsils. Throughout the evening, Cocker also made toasts to relevant April 11th pop culture legacies, strumming out a version of “Louie Louie” as a tribute to Richard Berry, who was born on this day in 1935 (“Imagine a world without that riff!”), and quoting Kurt Vonnegut who died on April 11th, five years ago (“”I want to stand as close to the edge as I can without going over. Out on the edge you see all the kinds of things you can’t see from the center.”).

His witty chatter and storytelling only made you warm to him more, even though he once sternly rebuked himself for a lengthy song explanation and apologised for not just getting on with it and playing it! It is difficult to describe the appeal of Pulp to someone who doesn’t get it – the glorious, compulsively danceable disco influenced pop, combined with Cocker’s sex and social class lyrical obsessions, resulting in a sort of Abba-meets-The Fall-singing-from-a-Mike Leigh-film-script type feel.

The blazing colours of the surrounding stage screens and the spectacular light show only reinforced the performance as a technicolour orgasm of perfect pop. “Babies” and “Underwear” (“a song about changing your mind at the last second…when you don’t have any clothes on.”) were followed by the highlight of the night for me, the pulsing, sleazy noir of “This Is Hardcore”. Jarvis climbed the ramparts again, followed by a blood red spotlight, and disappeared behind a curtain before emerging theatrically from behind it, twisting and swishing it around his lanky frame. When he returned to the stage, he laid down on his back and thrust his legs out in time with the burlesque Busby Berkeley style choreography of the video clip. Next was the pastoral “Sunrise” from 2001’s underrated swansong “We Love Life”, and “Bar Italia”, about the dreaded comedown after a brilliant night out (which some of us will be feeling after this gig!).

Then Cocker appeared to be giving street directions, “Out of Bar Italia, turn right, over to Charing Cross Road, you pass Saint Martin’s college.”, and it’s not long before there’s a collective gasp as the penny drops (““And if you don’t already know what the next song is, what are you doing here?”) and the crowd goes mental for the big anthem they were all waiting for. A brief lamentation of CSM’s closure and move across London concludes the “Common People” intro, and after an explosive surge of impassioned energy, they leave the stage.

The encore brings us “Like A Friend”, written for the Great Expectations soundtrack, spiteful break up song “Bad Cover Version” (“Relationships don’t always work out. That’s why we have songs, to get over it.”), and finally finishes with the band’s second biggest hit, “Mis-Shapes”. “Brothers, sisters, can’t you see? The future’s owned by you and me”, Cocker declares with an evangelical zeal, and at that moment it feels like he is right. If there’s one band we need again right now, it’s Pulp, and they’re back in phenomenal form.