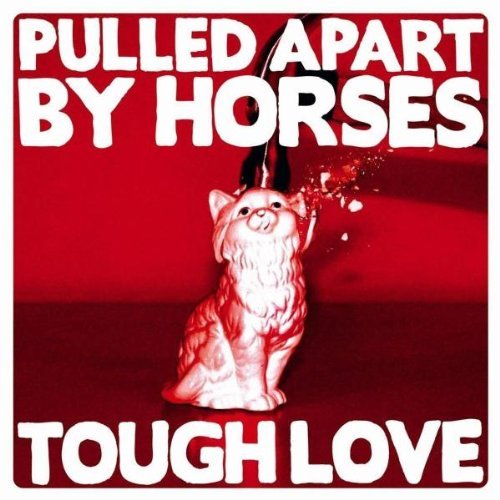 With one of the best live shows out there – a visceral, chaotic and fantaically dangerous display of flailing limbs and flailing chords flying about in sonic skree, Leeds band Pulled Apart By Horses grab the frentic end of hardcore and post hardcore and turn it into their own.

If their debut album was almost too good at capturing their live chaos they have pulled off the neat trick of adding some structure to the adrenalin and delivered a great second album, a second album that makes sense of their chaos without losing its thrilling rush.

Expertly produced by the legendary Gil Norton who made his name with the Pixies and Foo Fights amongst many others, the guitar riffs sound massive and collide beautifully, the excitement level is still cranked but the songs are allowed to breathe whilst the energy level never drops, this is all too rare on these kind of records and most bands will tell you how difficult it is to make a raw, almost live record work in the studio.

A great example of this is with the lead off single, ‘V.E.N.O.M,’ which is a great pop tune assaulted with a punk rock ferocity that will tear up many a festering bedsit in the next few months, an anthem for the skinny punk rock rake and a point to future punk, it’s great single and an example of the life and imagination left in UK punk and post hardcore. The song is built for the moshpit with its breakdowns and is an example Ã‚Â of the band’s potential for the crossover without losing their fire.

With this thrilling album, Pulled Apart By Horses are proof that British rock and punk are in fine form.. let’s see this one storm the staid world of the Mercury Awards later this year.