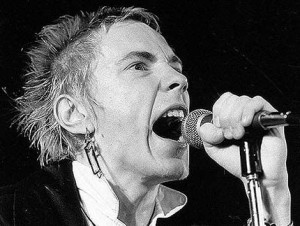 I could have sworn there was already one autobiography about the great Rotter but there seems to be a new one in the offing…Simon & Schuster has signed the world rights to a new autobiography by Sex Pistols singer Johnny Rotten (real name John Lydon).

S&S senior non-fiction commissioning editor Kerri Sharp won the rights to the book in a “hotly contested auction” after she met the star in a London hotel in November 2013. The deal was cut through Kevin Pocklington at Jenny Brown Associates.

Lydon said: “This book is basically about the life of a serious risk-taker. I make things safe for other people to follow on in my wake. I’m a stand-up-and-be-counted fella – but that’s in a world where nobody seems to be able to count.”

Sharp said Lydon’s “importance as a cultural icon” could not be “overstated.” She said: “Since the mid-1970s he has consistently inspired both musically and politically. My life changed when I saw the Sex Pistols in 1977 and to publish John’s book is a dream come true. This will be a lively, rock ‘n’ roll ripping yarn full of opinion and surprises whilst also being a thoughtful and mature look back at one of history’s most extraordinary lives.”

Lydon will be writing the book with British music journalist Andrew Perry. The as yet untitled autobiography will be published  as a hardback in October.

In 1994, Lydon published a book called Rotten: No Irish, No Blacks, No Dogs, co-authored with Kent and Keith Zimmerman through St Martin’s Press and Hodder & Stoughton. The paperback edition was published through Plexus Publishing in 2003.