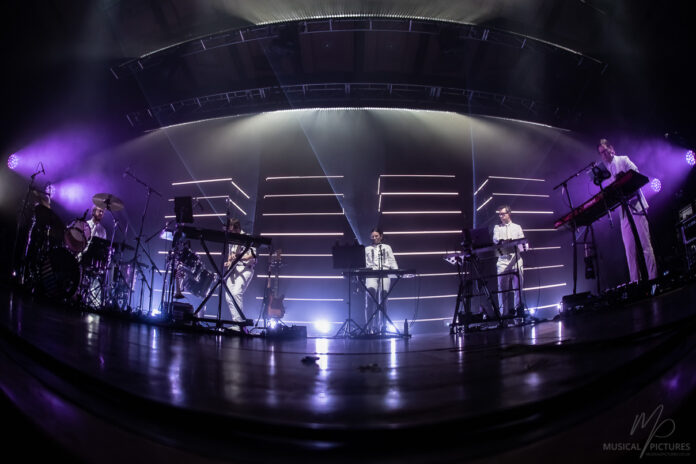 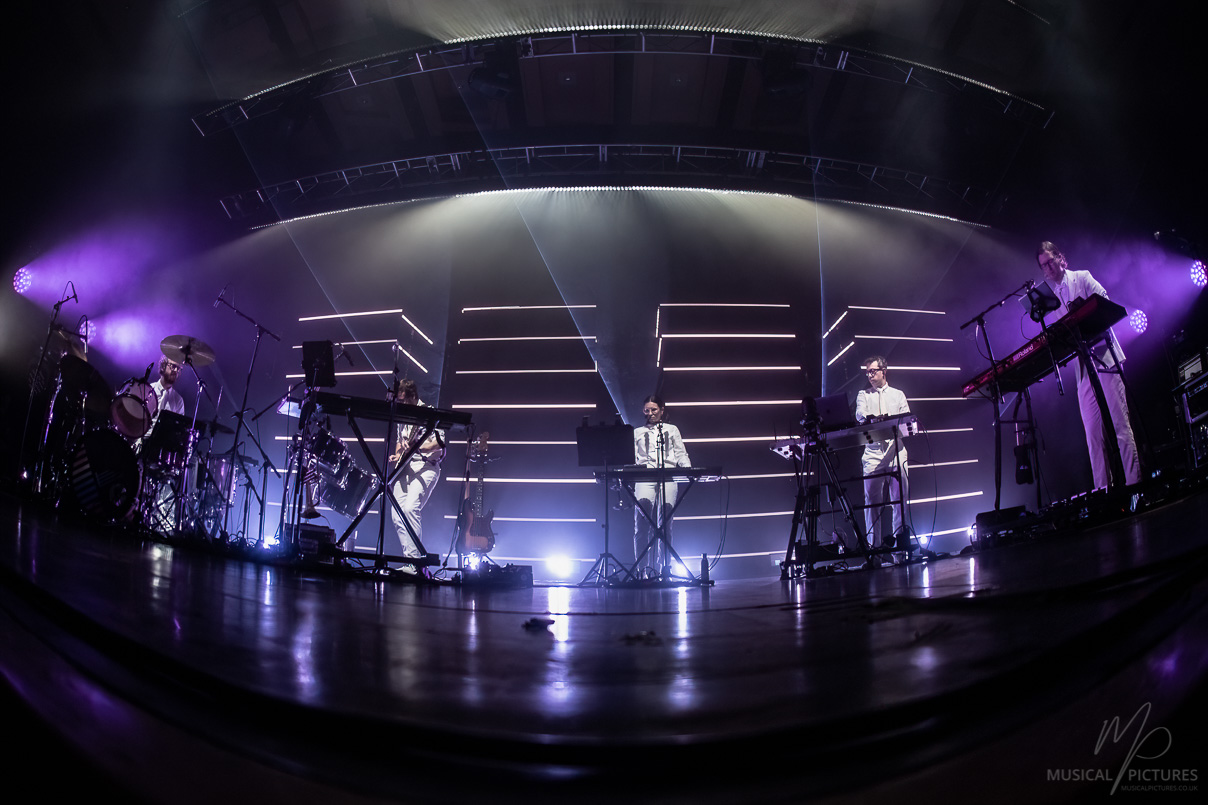 Public Service Broadcasting marked a new direction with their latest album Bright Magic, a tribute to the city of Berlin. Simon Reed takes a trip over the South Downs to Brighton Dome’s historic concert hall to see how the new material translates in the flesh.

While it has received plaudits from the press pretty much across the board, it would be fair to say that London’s Public Service Broadcasting have divided some opinion in the fanbase with their new record, Bright Magic. A nostalgic homage to the history, culture and personalities of Berlin, it does demonstrate a clear break from the shtick that made the band instantly recognisable. Gone are the narration samples of historic public service and propaganda films delivered with Received Pronunciation and often served with a side of good old-fashioned English jingoism. The new music is long on instrumentals and where there is spoken word it’s generally delivered live in German language via a revolving door of guest vocalists. The result is a PSB recording which is more abstract and which requires more investment from the listener than any of those which preceded it.

I was certainly intrigued to see how this would play out in a live context and didn’t have to wait very long at Monday night’s Brighton show as the performance kicked off with the opening three tracks from the new work. Walking out under a cloak of green light, the band opened with Der Sumpf (Sinfonie der Großstadt) aka The Swamp (Symphony of the Big City). It’s a prologue to the establishment of the city itself, for Berlin was built upon infertile marshland. Der Sumpf has an arpeggiated synth line which sounds remarkably like the theme to Netflix’s Stranger Things. As much as I’d like to imagine the earliest settlers sinking the emergent city’s first foundations into the bog when I listen, instead I can’t get the image of a Demogorgon skulking beyond the razor wire at Hawkins Lab out of my head. One solitary green light isn’t doing much to dispel that. 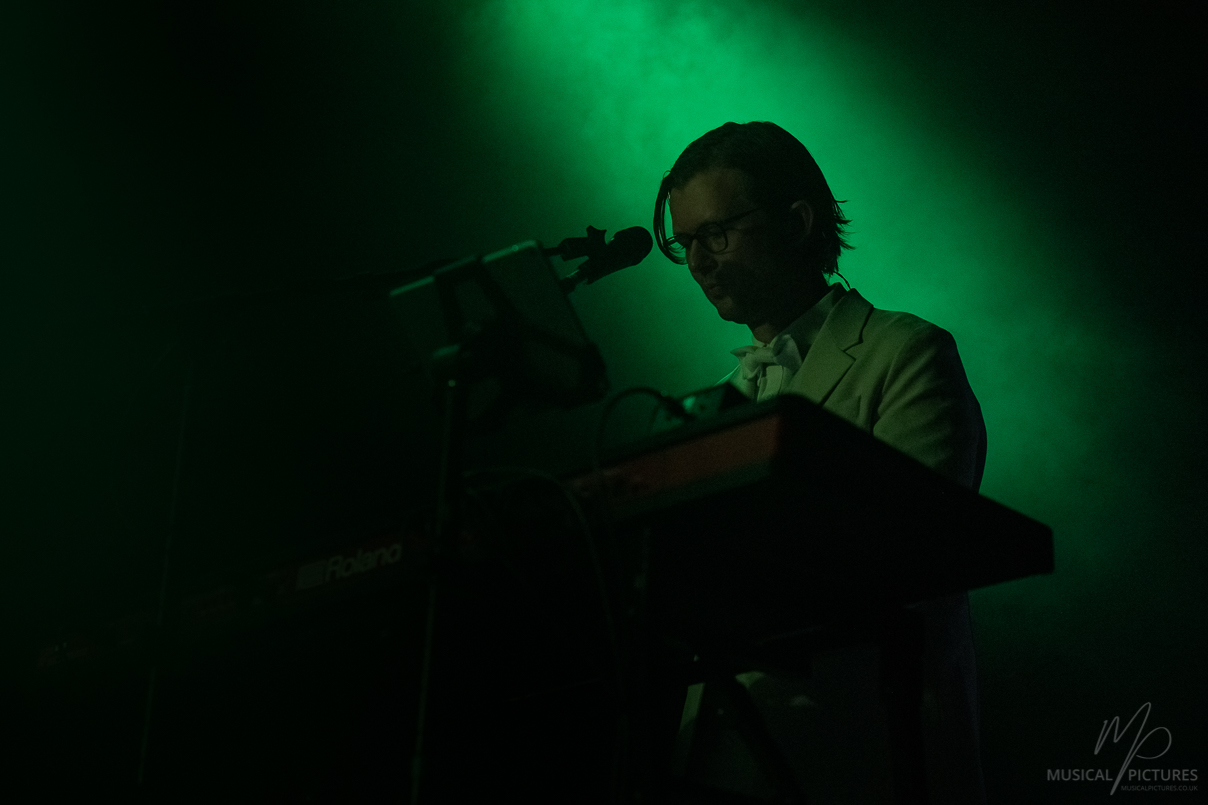 It was a low-key start; I suspect by design. The band launched straight into Im Licht (In The Light), a song which references the Berlin im Licht 1928 Festival of Light, and suddenly we were bathed in blinding amounts of it. Light is a recurrent theme on Bright Magic. Tonight’s third piece, Der Rhythmus Der Maschinen (The Rhythm of the Machines) concentrates on the establishment of heavy industry in a pre-WWII Berlin, where Siemens and AEG were knocking out most of mainland Europe’s electric light bulbs.

PSB started life as the solo project of J Willgoose, Esq., a multi-instrumentalist who juggles keyboards, samplers, looping pedals and guitars with a sleight-of-hand that would make Dynamo blush. In time, Willgoose was joined by Wrigglesworth on drums and latterly by JF Abraham on bass, guitar, percussion and flugelhorn amongst others. In the live context, the performances are brought alive via Mr B, a fourth member of the band credited as “set designer and visuals expert.” It’s Mr B who choreographs the video films and graphics which play on giant screens as a backdrop to accompany the music. During Der Rhythmus Der Maschinen, the band are flanked by images of gears whirring, presses stamping, and chimneys.

So, they’re a three-piece that are kind of a four-piece. Except on this tour, Public Service Broadcasting are essentially a five-piece. Stood centre stage in matching white suit and glasses is EERA, or more formally, Anna Lena Kirsten Bruland, a Norwegian musician who contributed vocals to some tracks on the new album and who delivered the sung vocals tonight. She’s definitely not unknown to this audience though because as well as appearing on the record, she also delivered a captivating support slot around an hour ago. 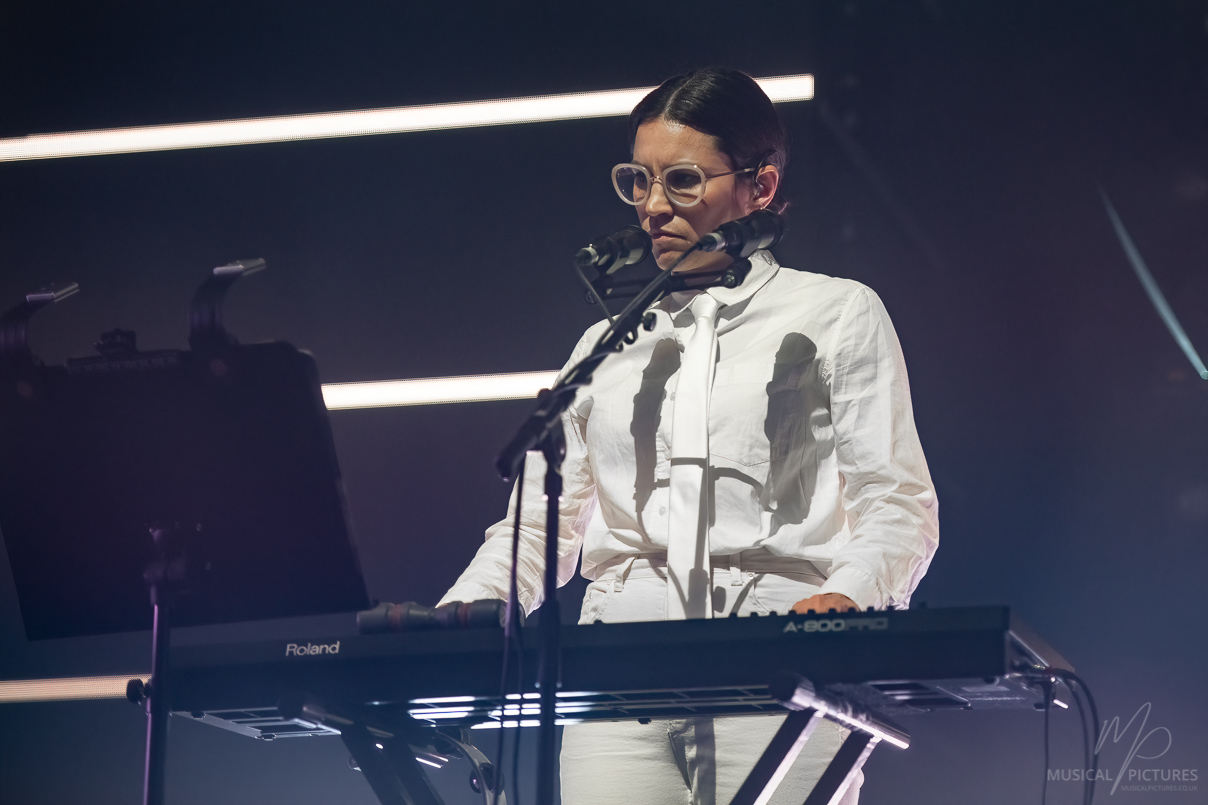 EERA’s first moment to shine in the main set was in Gib mir das Licht (Give Me The Light), a tribute to the openly bisexual, heavily opiated burlesque (and often fully nude) dancer and artist Anita Berber. There weren’t many taboos Berber didn’t shatter in 1920’s Berlin. It’s a haunting tune with a fragile-sounding vocal adapted from Berber’s poem Kokain, which EERA delivered in great style. The piece closed with a beautifully moving baritone sax solo played by John ‘Rittipo’ Moore. It’s one of many appearances made by Rittipo as he forms one-third of a horn section affectionately known as “The Brassy Gents” who come and go as required through the performance. Sort of making PSB an occasional eight-piece. You still with me?

While nearly half of the setlist was dedicated to the new record, the band made sure they delivered some crowd pleasers from previous releases. The Race For Space from 2015 recalls the ionosphere-puncturing activities conducted by the Americans and Soviets through the 1950s and 1960s. Tunes such as Sputnik and E.V.A. (as in Extra Vehicular Activity) were played and required far less imagination to fully appreciate, backed as they were by archive film of rockets whizzing about the place and astronauts getting pummelled in centrifuges.

Every Valley from 2017 was another poignant album recalling the reverence steeped upon the coal mining industry through the 1970s followed by the ruthless shafting it took during Thatcher’s 1980s. The band played Progress and People Will Always Need Coal to reminisce the former period and All Out to recall the latter. All Out has become something of a powerful staple in any PSB performance. Focusing on the policing of the year-long miners’ strike in 1984, it’s about as loud and aggressive as the band get. Willgoose crashed guitar chords off the walls while 30-foot-high pitched battles between miners and police played out behind him. It’s an extremely angry piece of music reflecting an extremely angry time. 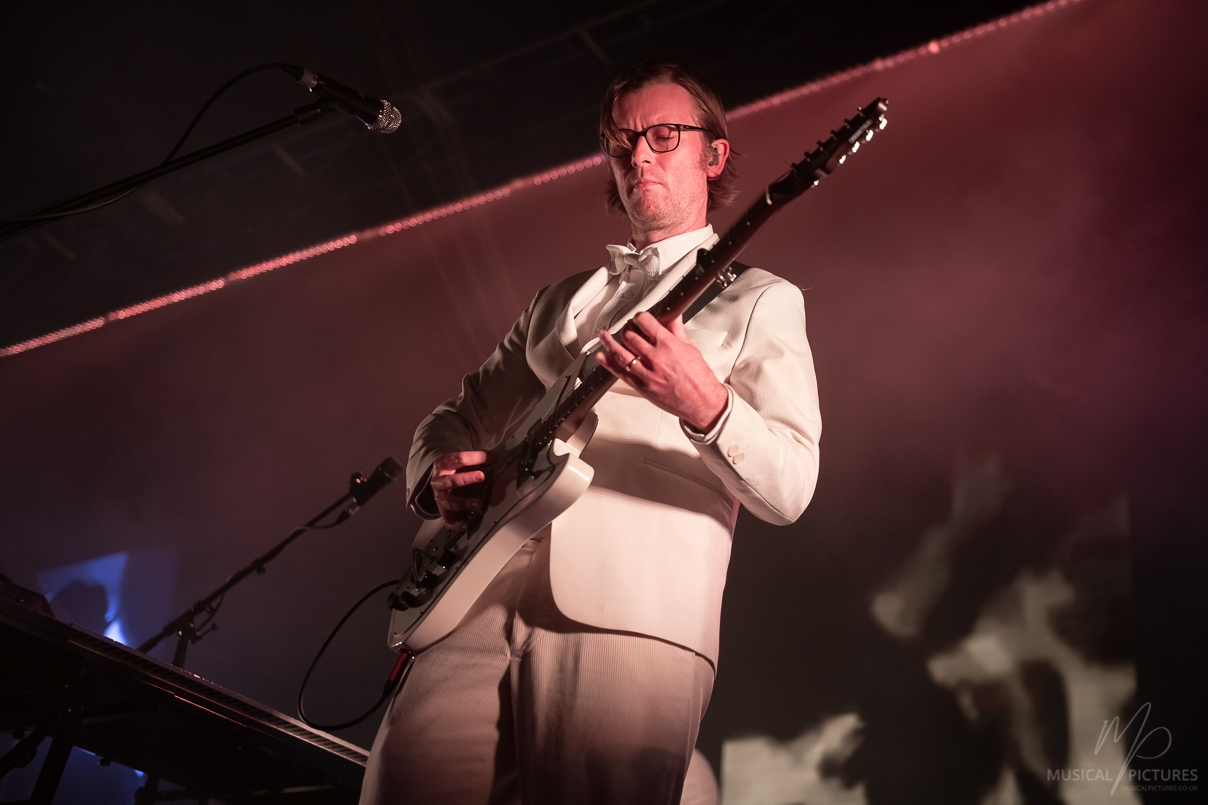 Another opportunity to get the fuzz box out came in the form of Spitfire, or: “This is a song about a plane,” as it’s always introduced. It has just about the most infectious riff I’ve ever heard. It’s a real crowd pleaser, though a few of the standing people in the stalls appeared not to be moving their feet so I can only assume they’d had them nailed to the floor. The Spitfire riff is deceptively difficult to play: I’ve tried and struggled. Willgoose made extravagant moves on his Rickenbacker while also recording loops and playing keyboard parts as required. If he wasn’t a gifted musician, he’d make an accomplished music hall plate spinner.

If Spitfire requires three hands to be able to play comfortably, the three-part Lichtspiel (Play Of Light) suite which occupies the majority of side B on Bright Magic is an altogether more ambient, relaxing affair. Dominated by multiple layers of lush keyboard swells and pads, the band played it in front of Viking Eggeling’s 1923 experimental animation film Symphonie Diagonale, which inspired the music and the latest iteration of PSB’s ‘satellite dish’ logo. It was a calm segue between some of the more aggressive music which came before and the bangers still to come in a finely judged 105-minute setlist.

The main set closed with two more fantastic tunes from The Race For Space. The Other Side chronicles the acquisition of Apollo 8’s lunar orbit, the first time this had been attempted on a manned flight. Had it been screwed up the crew would have ended up impacting the lunar surface or else skipping off the back of the moon and onward into the infinity of space, a pair of outcomes resulting in certain death. It didn’t help that the critical manoeuvres took place when the craft was on the far side of the moon and out of radio contact. The period of radio silence was played to fantastic dramatic effect with only occasional whoops piercing an otherwise silent auditorium. Of course, we all know they made it safely around the back but, notwithstanding that, when the music picked up and contact was re-established there was a huge cheer in the hall. If the audience had been wearing hats, they surely would have tossed them. 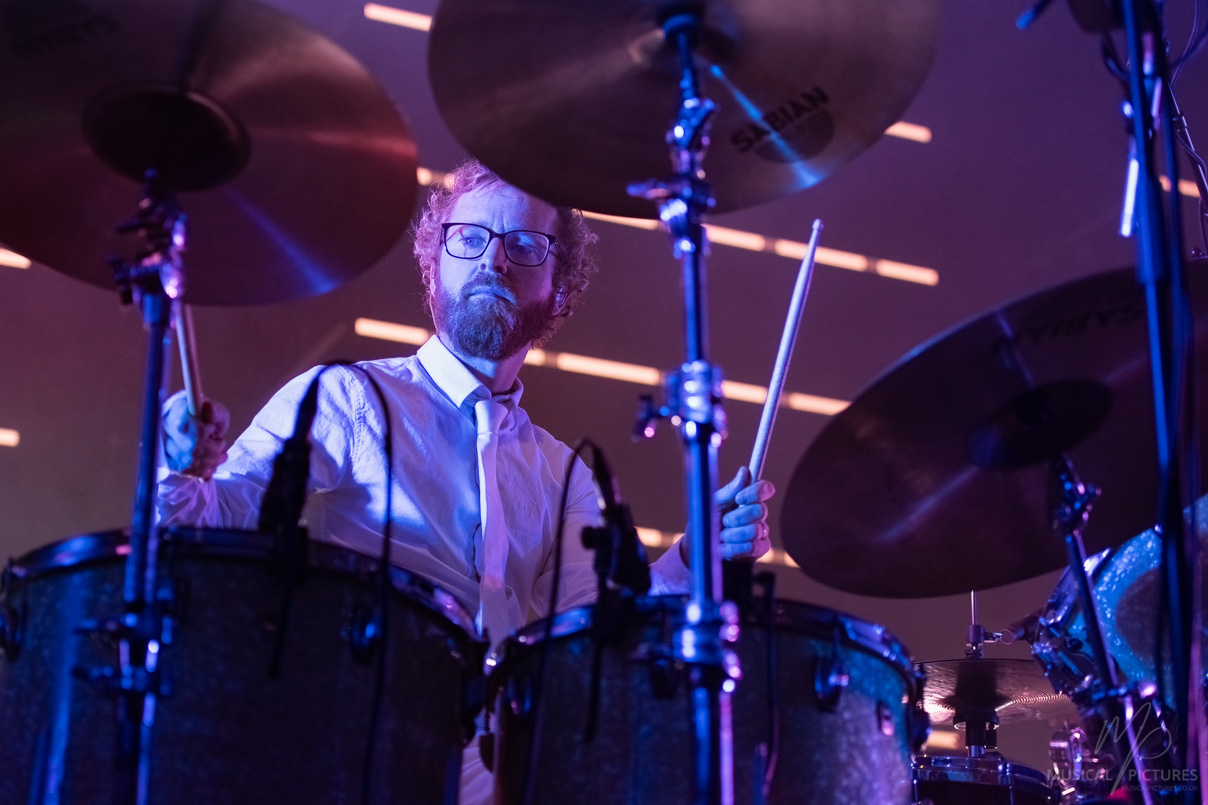 Go! captures the final minutes of the Apollo 11 moon landing, except in the PSB version the mission controllers all shout their positive mission states of “Go!” in perfect 4/4 time. The audience did it too, with associated punching of the air. This tune is a massive crowd favourite and was notable for some of the fastest rhythm guitar playing I’ve ever heard. I’ve no idea how Willgoose’s Telecaster retained all six strings by the time he’d finished with it. Perhaps it didn’t. Perhaps it never does.

A short break preceded a luxuriant four-song encore. White Star Liner chronicled the ill-fated inaugural sailing of the Titanic, finishing with an ominously approaching iceberg on the big screens. People, Let’s Dance, lead single from the new album followed. It’s a cracking 1980s-inspired synth-pop explosion with a lead guitar line that owes much to Depeche Mode’s People Are People. The video accompanying the single release featured five rollerskating dancers decked in rainbow-coloured jumpsuits – a nod to the inclusivity of Berlin club culture, which was happily embracing in the 1980s what we’re only just getting our heads around now. The dance routine was replayed on the big screens in bold but heavily pixilated cartoon graphics. If Nintendo had made a Just Dance video game forty odd years ago, it would probably have looked like this.

The Brassy Gents came out for the final third of People, Let’s Dance, and stayed out for Gagarin, a tribute to one of the CCCP’s finest. A funked-up homage in the style of a 1970s TV cop show theme tune might not be the most obvious genre to celebrate the first man in space, but it’s what Willgoose went with, and my word, it was a lot of fun. The Brassy Gents gyrated in choreographed form between horn stabs and a pair of comedy astronauts joined the party, briefly turning PSB into the weirdest looking ten-piece band in history. Meanwhile, JF Abraham led the crowd in coordinated hand clapping and jumping around. He’s the closest the band have to a conventional rock star, except that he also plays the flugelhorn.

The final song tonight was the final song at every Public Service Broadcasting show and one of only two taken from the debut PSB album, Inform-Educate-Entertain. Everest is the everyday tale of Sir Edmund Hillary and Sherpa Tenzing’s successful ascent to the top of the world in 1953. “Two very small men cutting steps in the roof of the world,” says one of the narration samples. Given that, at the time it was recorded, the band consisted of just Willgoose and Wrigglesworth, this seems apt indeed.

The UK leg of the Public Service Broadcasting Bright Magic tour concludes at Cambridge Corn Exchange on 11 November and then heads into mainland Europe. Tickets are available via the band’s website. It comes very, very highly recommended.

All words and photos by Simon Reed. His website Musical Pictures is here and you can visit his author profile for Louder Than War here.