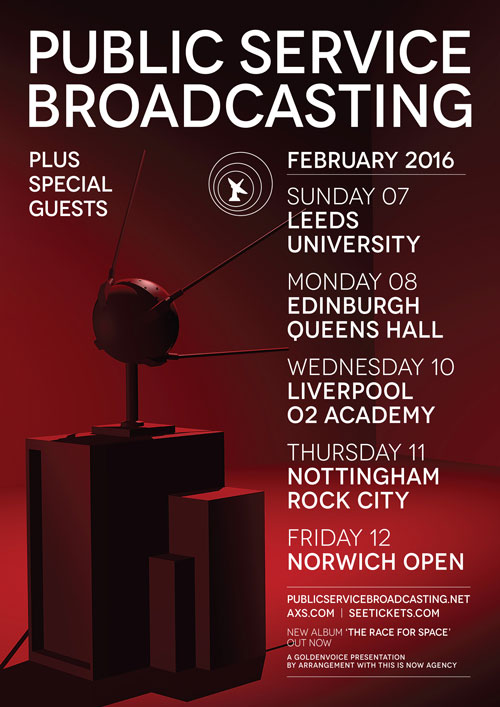 Every now and then, there comes along a band that you can’t really imagine playing live. Sleaford Mods once felt like that, until you realised that actually it was just one bloke pressing play on a laptop whilst another chats his heart out over the beats.

Before experiencing them live, Public Service Broadcasting also felt like that. A mysterious and intriguing mixture of historic audio samples, a diverse electronic accompaniment and a few infectious banjo-led grooves. How on earth would such a thing go down live?

The answer is: better than I could have ever imagined.

PSB kick tonight’s sold out show off with a slow building then emphatic ‘Sputnik’. Behind the band in the middle of the stage is a small structure that looks satellite-esque showing pixelated images, and either side is a screen showing stock footage. At the front of the stage on both sides is a stack of old TVs. Just as ‘Sputnik’ is pulsating towards its electronic peak, drummer Wrigglesworth hammers out the final two minutes, and the track goes from slow building dance epic to alternative rock crusher in a matter of seconds, almost catching the crowd off guard. From that moment on, it becomes apparent that Public Service Broacasting’s live show is like nothing else.

Songs like ‘Night Mail’ and ‘London Can Take It’ feel like they shouldn’t work live, but they do. The former chugs through the venue, sounding layered and riveting with the stern spoken samples finding their satisfying rhythm, whilst the latter sounds powerful, punctuated by an infectious banjo groove. Whilst other bands might opt to introduce each song with a little small talk or a grunt, PSB use a voice sampler with pre-recorded phrases that sound like a sassy C3PO. Again, it shouldn’t work, but cheeky heckles from the crowd are confronted with a “we’ve all had a few” and it’s a funny touch.

Fan favourites ‘Gagarin’ and ‘Spitfire’ all go down a treat and get the crowd moving, whilst ‘Signal 30’ sees the band swap their electronic sensibilities for good old fashioned rocking out. Vintage footage of hot rod racing on the screens behind matches well with the music. The whole thing feels like a cinematic experience as well as a gig. ‘The Other Side’, complete with its high-stakes space mission control narrative is an emotional track live. Gradually building, with its feel good 80s synths, the track rises with the narrative and towards the end, it’s difficult to know if the crowd is applauding the safety of astronauts or the quality of the band. ‘Dig For Victory’ carries a similar emotional urgency live, as if for three minutes time is running out.

The encore ends on ‘Everest’ with help from a three-piece brass section that have been terrific all night. The night is summed up by heads in the crowd turning to each other with looks of surprise and appreciation. Public Service Broadcasting have not only created something truly innovative with their music, but they’ve found a way to channel the same quality in the live setting, crafting a truly unique experience.