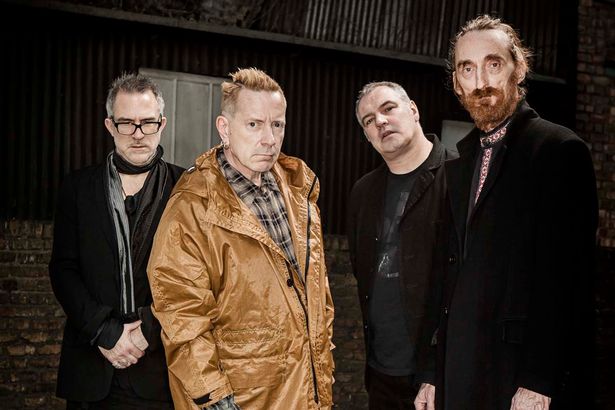 For the first time ever, Public Image Ltd. (PiL) are visiting Ukraine as part of their wider European tour, which also brings PiL to Poland, Slovakia, Germany, Spain and the UK. It is highly symbolic that this historic event should take place just a few weeks after the 30-year anniversary of the Chernobyl disaster in 1986. That event, among others, led to the crumbling of the Soviet Union, which gave way to an independent Ukraine and the cultural freedom that led to the emergence of a DIY underground ethos among musicians in this former Soviet republic.

Joining PiL in concert are “Brati Hadyukini”, a group considered legends of Ukrainian rock, who numbered among a handful of bands that really set the foundation for a thriving independent music scene in this county from the days when the wave of rock and roll was finally permissable under Gorbachev’s policy of Glasnost’.

On this occasion, Ukrainian rock legends meet British post-punk legends, playing two concerts together – in Kyiv and Kharkiv. While they play distinctly different genres of music, they are, in many respects similar. They both started playing back in the ’80s, survived the crisis-ladedn 90s, and skillfully combine in elements of other musical sub-genres into their music, including reggae and ska. With their intersecting styles, their music has come to shape the musical tastes of several generations.

“We have never played punk rock in its purest form,” explains Brati Hadyukini. “Like PIL, we are also constantly in a state of evolution of music. In our opinion, John Lydon has excellent musical taste. We hope that we will have the opportunity to speak with him on the subject of the revolution and evolution.”

In 1978 the group released their debut album ‘Public Image: First Issue’, which is considered to be one of the first post-punk releases. The second release ‘Metal Box’ was listed among the “500 greatest albums of all time,” according to Rolling Stone magazine. Their early work is often regarded as some of the most challenging and innovative music of the post-punk era. The NME described PiL as “arguably the first post-rock group”

The band returned to the stage in 2009 after a long break, during which John Lydon released a solo album and memoirs. PiL released their latest album ‘What The World Needs Now’ in September 2015. This current tour is taking place in support of this album.

The Ukrainian Concert Agency, who has organized these events, is carrying out a charitable action for war veterans to attend the concert free of charge.