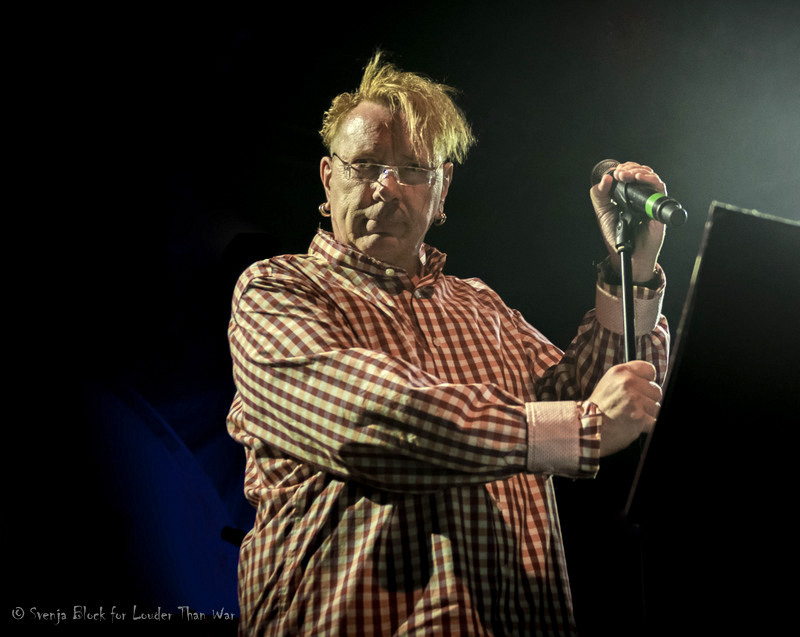 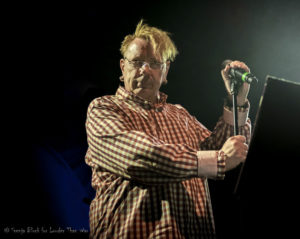 A full-to-bursting Engine Rooms (and it’s an 800 capacity!) played host to a sold-out crowd on one of the hottest days of the year for eagerly-awaited Public Image Limited (PIL) who last played at the same venue back in 2015. They are celebrating their 40th anniversary of playing and their 2018 ‘The Public Image is Rotten’ tour is currently spanning across the UK, Europe and Japan.

As expected there was a real buzz about their Southampton date and I came across many people seeing PIL for the first time, having heard good reviews of their previous gigs over the release of their latest album 2015’s critically-acclaimed ‘What The World Needs Now’ and of course the anticipation of finally seeing the (in) famous John Lydon (formerly, of course Johnny Rotten of his previous band The Sex Pistols) at last. Lydon, Lu Edmonds, Scott Firth and Bruce Smith are PILS’s current line-up and are to date the longest-running one.

This particular evening did not get off to a fine start however – the doors were scheduled to open at 7:30pm but by the time my companions and I arrived at the venue over an hour later there was a still a lengthy and slow-moving queue. Unfortunately, rather surly and abrupt door staff did not aid in addressing this.

With no other pubs or facilities around (the Engine Rooms is situated in an industrial estate just outside of the city centre) and without shade, punters had little choice but to keep their patience and wait. There was to be no support act, although this not was not made clear on the advertising which in itself didn’t matter as everyone was here for this band only, however had people been made aware beforehand perhaps they would have not needed to rush to queue. Just before entering we turned to see John Lydon and co come out of a side door and walk round – I think the collective thought for a moment was ‘are they still playing or walking out?!’ But luckily the band were just going round to the rear of the venue and shortly came onstage to massive applause – and relief.

It wasn’t a comfortable experience at first – inside the venue – which is one long fairly narrow room with just one bar – was crammed, hot and sticky with a 10-deep bar queue and harassed staff rushed off their feet. But by the time we finally got our beers and shifted forwards for a space, I found myself becoming absorbed in PIL’s set – a fantastic, crowd-pleasing mix spanning at least one track from each album from their vast, eclectic and impressive back catalogue. It was an evenly-paced solid set. There were of course the well-loved classics such as ‘Public Image’ from their first, self-titled album, ‘Flowers of Romance’ from the album of the same name, ‘This is Not a Love Song’ from ‘This is What You Want’ and the wonderful ‘Rise’ leading the audience to join in with the chanting of the anthemic line ‘Anger is an energy’.

Other tracks included ‘Memories’ from ‘Metal Box’, ‘Warrior’ from ‘9’, ‘The Room I am In’ from ‘This is PIL’, ‘The Body’ from ‘Happy’ and ‘Cruel’ from ‘That What is Not’ and several more dub-bass-heavy tracks from 2015’s ‘What the World Needs Now’. And not forgetting their own unique take on Leftfield’s ‘Open Up’.

The set seemed to pass very quickly but it was solid, varied and evenly paced throughout until the 2 encore tracks. Lydon’s vocals, as ever soared high above everything else – above the sticky heat and the jostling crowd, and his charismatic presence seemed to fill the stage – and not just due to his girth either!  In conclusion PIL shone as best as they could in the punishing heat and in a venue not best-equipped to deal with the sheer volume of people on this occasion, though the people were certainly won over by the passion and performance of this still-very relevant band.

More info about the 2018 tour, Lydon’s recent autobiography ‘Anger Is an Energy’ and PIL discography here: