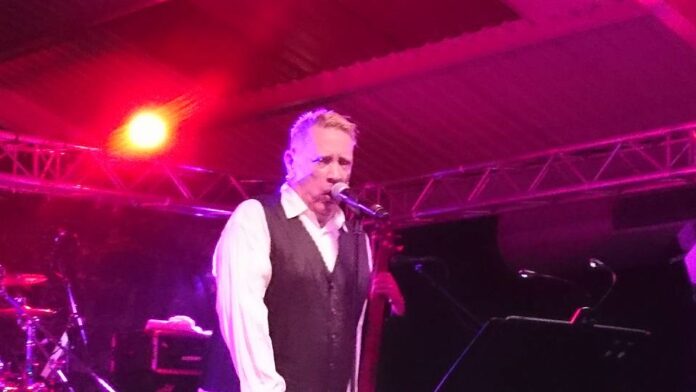 Continuing our coverage of the PIL juggernaut Ged Babey reports from the Deep South …of England.

Public Image has SOLD OUT.

Every single ticket for the venue had been snapped up, which at £30 a go was a bit of a surprise in these cash-strapped days.

But then again, Johnny has been on (hack -phutt) Piers Morgan and is back to being one of the Greatest Living Englishmen, despite and probably because of, all his many contradictions.  And the Lu, Bruce, Scott PIL-Band are quite possibly the most accomplished and groovily powerful combo there has been trading under the name. (With absolutely no disrespect meant to Levene and Wobble)

The reason this was extra special was the fact that since he started in music, John Lydon has never played in Southampton, or for that matter Portsmouth, Winchester or Salisbury.  A whole massive catchment area that has been deprived of Johnny in the flesh for decades.  The faithful have had to travel to Bournemouth, Poole, and that-there London over the years to see him and PIL.  Which made it an adventure, but there’s nothing quite like a hometown gig when ever former-punk, weirdo, freak and fan comes out of the woodwork to fill a 900 capacity venue to celebrate the arrival of a totally on-form Public Image.

They started with that awful new single, Double Trouble.  It’s a statement of intent by John I guess. ” I can write a song about anything I god-damn want to”.  The Voice of a Generation mantle has been forced upon him and if he wants to go from Anarchy to the “Self Analysis” of PIL to a song about nagging and plumbing  he will.

“Its like his Laughing Gnome” a wise man said to me.  Well, I grew to love Lollipop Opera and Fodderstompf was always comedy genius, PIL do throw some curveballs, but Double Trouble is just throwaway rubbish as far as I’m concerned.

From thereon in though it was a master-class in kraut-dub post-punk psycho-drama.  Poptones and Death Disco were long, drawn-out excursions which although loud and beautifully wrought did try the patience of some.  This is Not A Love Song is vastly improved from the recorded version.  The marathon Religion/Turn Up The Bass was my personal highlight (prior to the encore)..

In the interests of democratic balance, here are some opinions from friends of mine, grabbed from Facebook ( in a finishing the review with the minimum of effort which I am now doing very successfully… style.)

Richard Emery; ” Operatic hypno-punk John Lydon stomped onto the stage and slapped his book of sermons down like a madcap teacher. Obviously in a good mood thanks to the gig selling out, and Arsenal hammering Man Utd earlier in the day.”

Phil McCarthy; “It was a great gig. I’d have happily watched it in a comfy armchair. At one stage I was stood at the the back being negative but in the end I thought, fuck it, pushed myself to the front of the stage and ended up in the mosh pit. My suede shoes are ruined”.

John Flash “I suppose at least they are playing INSIDE a Metal Box..”

Russ Bestley “it was pretty good, dragged a bit in a couple of places but still some great songs and they even played a few classics. Lu is a great guitarist – best thing for them since Keith Levene.”

Matt Clark “brilliant.  Lydon has a superb band and the show was faultless.”

Ian Canty; “I really enjoyed it. It made me feel happy. People who come out with this “it was all long songs” stuff do perplex me, PIL have played this kind of set for about 4 years now so you can’t say you weren’t warned. Being a fan of Neu!, Cluster and Harmonia helps I suppose, I went along for the groove…. And to see one of the great frontmen. They delivered and the crowd (towards the front anyway) seemed to love every minute..”

Nik Scutti “they were great, shame it was in a shed”.

The Engine Rooms is better when its only three-quarters full, with room to move,  it has to be said but needs full houses to survive. Catch 22.  The sound couldn’t’ve been better though and the hundred minute plus set meant you got your moneys worth.

The encore of Public Image and Rise was phenomenal, There’s a dodgy video here which captures it.

It was a triumphant night though despite a few moan(er)s and PIL are still one of the most original, intense, funny and contradictory bands you’ll ever see.  They are a collision of self-expression and self-analysis, self-indulgence and charisma, entertainment and free-wheeling music full of repetition, groove and anger, which is of course, an energy.

All words by Ged Babey. More writing by Ged on Louder Than War can be found at his author’s archive. Photo by Pamela Eckersall.