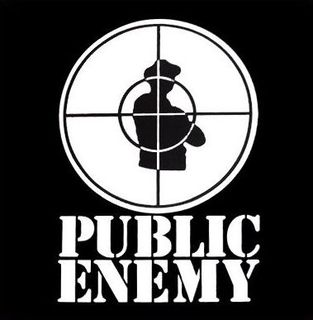 It’s really no exaggeration to say that the world of music as we know it would be a very different place without Public Enemy.

Since 1987 they have been releasing albums which don’t so much rip up the rule book as piss, shit, eat and vomit it out again in the manner of a Chinese Dragon with indigestion. Without their brain hammeringly potent cocktail shots of punk, samples, soul, funk, rap and rawk ‘n’ roll we would almost certainly never have seen the advent of drum ‘n’ bass, big beat or digital hardcore. The fiery punk-rave fusions of The Prodigy, Leftfield and The KLF may have taken on very different forms. The politicised all-guns-a-blazing insurrection of  bands of the nineties such as Manic Street Preachers, Fun Da Mental, Asian Dub Foundation and Rage Against The Machine may not have been given the time of day. Trip-Hop may not have been taken seriously. Their second album, It Takes a Nation Of Millions to hold us back was the most enraged, confrontational rock ‘n’ roll record since Never mind the bollocks here’s The Sex Pistols. Nothing, none of the metal, punk and hardcore albums released prior to its recording came sonically close to its righteous fury, heavy duty politicking and deranged production (courtesy of The Bomb Squad), almost 30 years later it still beggars belief. It was also the first proper Hip Hop album this reviewer ever bought (at the tender age of fourteen I believe), and still the most played rap disc in my now not-too-shabby collection. With the world in general currently resembling a video nasty from the Eighties (I’m thinking Deodato’s uncut Cannibal Holocaust) bands like Public Enemy are needed like a drought-stricken nation needs water. Chain mail at the ready, let the battle commence.

Chuck D enters the stage, the band (live drummer, guitarist, bassist and the one and only DJ Lord) strike up, and the unmistakable attack-dog alarm call of ‘My Uzi Weighs A Ton’ fills the room like an out of control tank flattening motorists in an M6 traffic jam. Critical faculties (making notes on phone, taking photos) are damn hard to carry out when you’re jumping and dancing around as much as this, it’s only the first flippin’ song for feck’s sake! It doesn’t get any easier either; the moment the one and only Flavor Flav enters, hood firmly over head, looking the epitome of cool (as ever) in his garish shades and clock necklace in the middle of ‘Rebel Without A Pause’ you feel every single hair on your neck, back and head stand up and vibrate. It’s powerful stuff, hard to fight back the tears on this and the likes of ‘Welcome To The Terrordome’, ‘911 Is A Joke’, ‘Bring The Noise’, ‘Don’t Believe The Hype’, timeless tracks which have provided a very significant soundtrack to my formative years and life experiences. The fact that it’s my first PE gig makes it all the more emotional. What a show too; part comedy, part rave, part rally, part punk gig, part civil rights speech, it defies EVERY expectation you may have had, every single goddamn freakin’ one man. World leaders, suicide bombers, racists, separatists, the US Government (particularly on a blistering ‘Hoover Music’), very few are safe from the virtuous bile of Chuck and Flavor. Frequently instructing the crowd to raise their fists in agreement, their powerful arguments against the impending Syrian conflict hold a moving conviction which place the majority of political figures in the ‘for’ club firmly in the naughty corner, Dunce’s caps applied. Music has the power to change the world, sadly the majority of the world won’t listen.

There’s plenty of more light hearted moments too. Liverpool is informed that ‘Public Enemy has your back, in more ways than one’ (good to hear!), and the band’s lead guitarist plays a cheeky snatch from ‘Day Tripper’ in homage to ‘the home of The Beatles’ in the words of Flav. We are not only treated to some impromptu (and bizarre) bass playing from Mr Flav, but also an even more bizarre (and brilliant) jam featuring Mr D on harmonica and Flavor on drums! Quite a spectacle. By the time the end approaches there’s a million different thoughts, ideas and directions buzzing around your head; Flav coaxing the entire crowd into raising their fists in the air, screaming ‘FUCK RACISM’ and ‘FUCK SEPARATISM’ (yours truly included) is a moment that is likely to remain jammed into my conciousness for a long, long time. After the gig I got chatting to a couple (man and a woman) who attended in a pub a few feet away from the venue. The woman, a History teacher, told me that she intended to incorporate a section about Public Enemy into her lesson on the civil rights movement, informing me that she feels today’s generation of kids need to be made aware of their achievements as a group, arguing that analysis of their work should be incorporated into the syllabus. You really can’t argue with that; four decades on, still the most important, vital band on the planet. Incomparable.