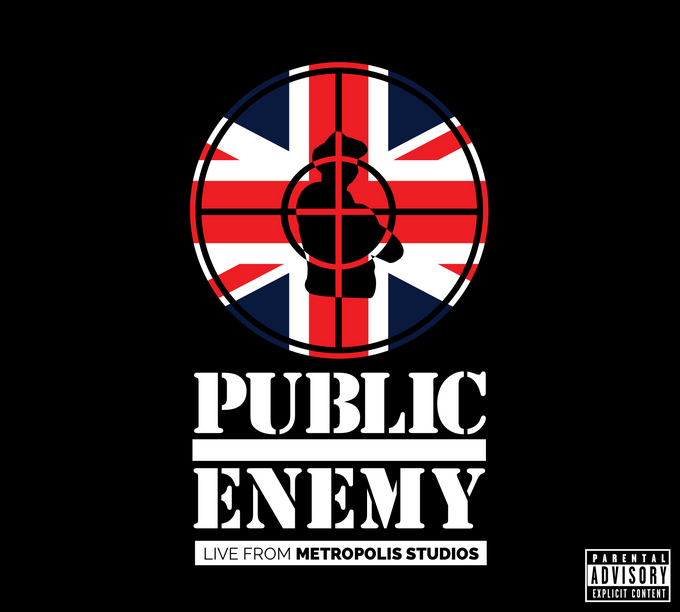 The hip-hop titans brought their incendiary live show to London’s Metropolis Studios where only 125 people were lucky to be in attendance. The gig has recently received the full release treatment with everything from DVD, Blu-Ray, LP, CD, and digital versions included. Simon Tucker reviews.

Just imagine it. You and only 124 others gathered in a studio in London witnessing one of the most pivotal bands of this or any time. Makes you jealous right? Well bury that feeling as we now get to witness/hear the gig in full stereo surround sound glory and even though it won’t fully make up for missing out it does give you a sense of what PE up close and personal are all about it.

The phrase “sonic onslaught” has been used to described the PE sound since year dot and it’s going to get trotted out again here as there are no better words to describe the battering your senses get when viewing/listening to Live At Metropolis Studios. A greatest hits set that injects life into the past numbers and also brings the latest cuts more vividly to life, LAMS showcases a band that are not on a road paved in nostalgia, they are forging ahead, giving voice to alt-media and those that don’t believe the hype.

The song choices are on point throughout as we are treated to celebrated classics such as Welcome To The Terrordome, He Got Game (gloriously smooth and melancholic), Bring the Noise (which gets a huge cheer from those in attendance and which the band decide to merge their original with the Anthrax collaboration to create a newer, harsher version than heard previously) and we also get to see the set out with their recent smash Harder Than You Think, one of the band’s more inspiring cuts.

The DVD hits you hard with the iconography that PE have used throughout their history and it is hear that you really get a sense of how PE are the FULL PACKAGE. Everything about them is well thought out and delivered  – from the clothing to the lighting. A PE gig is a step into the world of a million TV channels blasting at you all at once but without any crooked types twisting the tale so they come out smelling of roses.

The audio quality on both the record and DVD is crystal clear and never gets lost or muffled and what that highlights is not only the sonics and samples but how well Chuck’s vocals have aged. They have not lost a single bit of aggression and they now have an added grizzled timber making him sound more like the preacher he is than ever before.

This ain’t Mick and Keef, prancing and chasing dollar, this is NOW, this is US, this is TRUTH.