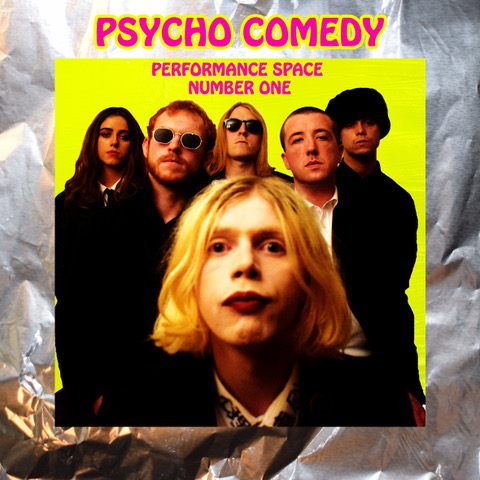 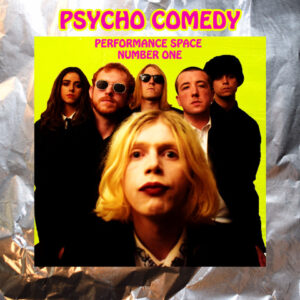 Scouse psych collective combine narcissism and nihilism. poetry and groovy rock’n’roll on idiosyncratic debut album. Probably the most exciting band to emerge from Liverpool in a decade or or more, says Ged Babey.

One: The way that Richard Hell says  ‘Beatles Suck’, captured at the beginning of Heartbreakers Live at Mothers.

Two: How Don’t Buy the Sun. and its voting record makes the city the anti-capital of the UK…

Which leads me nicely to the third thing which might well come to define the place in my mind: Psycho Comedy. A nicely fucked-up art collective/band from Liverpool.

I thought i was the first LTW writer to discover them, but Nigel interviewed them back in 2017 and Wayne featured them here.

It is not the best album of the year, but its one of the most individualistic, expressionistic and self-contained (who-gives-a-fuck about everything-else) albums you will hear in 2020.

It sounds like it could come from 1969, 1979, 1983, 1989…. it wants to sound like the Velvet Underground or Can or the Bunnymen- but ends up being more like Wayne County & the Electric Chairs and the Fall (circa Spectre Vs Rector!) which in my book is no bad thing. County is the unsung hero(ine) of NYC and the Fall a benchmark for stubborn independence.

Performance Space Number One comes across like the debut albums by the Horrors and Fat White Family – out of time/out of place oddities from the fringes -with some fresh ideas, but others borrowed from shadowy corners of the past. It’s a statement of intent, but on a limited budget …. the next album will be the classic if things go right.

In their own words, writ large in purpled prose they say of themselves and the album

A love letter to the city they call home, the vices that squeeze tight…  Psycho Comedy’s sound drips with the feedback, fury and freakishness… a renegade attitude embedded in the heart and soul of their art…  a “concept album”. but an altogether darker, sinister and psychologically-probing affair…. from battling the harsh realism of modern life with the surrealist temptation of debauchery, darkness and nostalgia. An often tense and troubling listen, true to their artistic vision… this is a collection that struts and sleazes around every corner, whilst beat poetry infiltrates and reiterates its complex and cryptic messages with activist colour.

At their best and most original when they are in full flow and have singer Shaun a-wailing and a-whoo-ing like a peroxide banshee and poet Matthew Thomas Smith reciting his verse in that distinctive phlegmy Scouse accent.  All around the guitars create a volatile electric storm with a metronomic beat just holding it all together.

Despite their desire to be a Scouse Velvets with an aloof, studied cool, Psycho Comedy end up being gleeful, camp, cartoon rockers like the Cramps led by a young Pete Burns. Again, this isn’t a ‘dig’, it’s what makes them eminently more fun and interesting.

Psycho Comedy are completely unlike most new boring identikit ‘Rock School’ business-plan, options-open, genre-dabbling wanna-be’s… they have a vision and self-belief which will attract an outsider audience of like-minded lost-souls, hedonists and romantics who believe that soul and grit and (artistic) gold can be found in the gutter.

If I was twenty years younger and less cynical, this album would’ve blown me away and I would be evangelizing about how I had seen the ‘future of (outsider) rock’n’roll’… but as things are – it’s a flawed but magnificent debut – and i hope there are enough people around who want to hear this kind of trad art-rock narcissism, nihilism. poetry and groovy rock’n’roll to make this album a success, and the band the cult heroes they deserve to be.