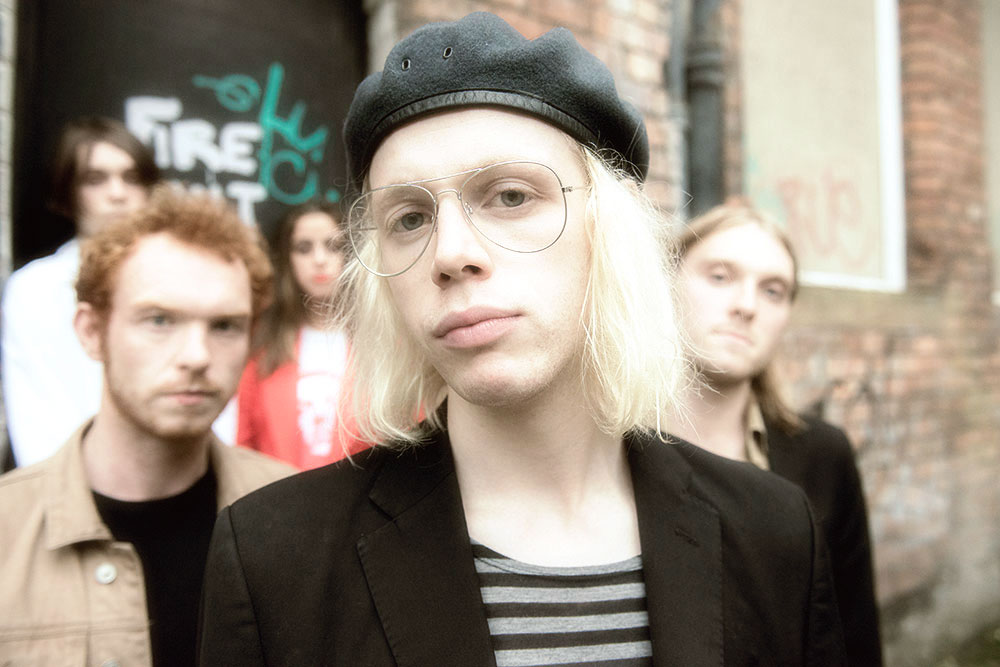 Psycho Comedy is a garage-psyche punk band from Liverpool who got together in 2015. Nigel Carr interviewed the band in Liverpool with photo by David Gleave at Northern Face Photo.

Louder Than War: Tell us a little about the band and how you got together.

Shaun: Jack and Lydia were friends, I go out with Connor’s sister Sophia who does all the art work for the singles, so we do all out own videos. Me and Connor have played in bands before with Jack and they’ve played together. I was on my own and I came up with the idea and concept of Psycho Comedy.

The name comes from The Comic Strip Presents with Ade Edmundson & Rik Mayall. I wanted to do something alternative like that that wasn’t about. It was arty and the Beatles and Stones were already old then. They were involved in music and always had bands on. The influences and the way they look. I lot of stupid things I do are probably a bit weird and do people’s head in. I was doing it with another lad called Adam who was very into art and film and I got him to do a track I’m Numb and then we got these in and we just started playing and it’s made it a force.”

Lydia: We were all lost musicians in a sense and then Shaun had this idea going on. Me and the two Jacks were at the point where we wanted to be back in a band. We approached Shaun then and even going back he had the songs and played them to us and asked what we thought just as friends. It was only down that line that we thought we’d team up with Shaun.

What are the band’s main Influences?

Shaun: A lot of the New York stuff like, Television, New York Dolls, all CBGB stuff, that era. We love all that 60’s Seeds stuff, The Stooges, MC5 and that and the more gritty side of the 70’s.

Connor: Even later stuff like Department S.  Bands like the Fat White Family & those sort of bands like The Blinders, there’s never been bands like that in Liverpool. Liverpool’s been very concentrated on Rock ‘n Roll, The La’s and that you know what I mean? I love all that don’t get me wrong but it feels The Bunnymen have always been that type of band like The Teardrop Explodes like what we have been going after, a bit less harmonies and more raw.

Lydia: I sometimes feel that when Shaun comes in with his songs and stuff the characters of us and our influences just naturally like, match.

Shaun: Connor’s a fucking great bass player, and I wouldn’t do it if he didn’t do what he did, Connor’s about Motown but he’s in to Black Sabbath and stuff like that. He sounds fucking dead heavy!
Connor: I like having loads of power behind it but at the same time quite emotional.

Do you rehearse a lot to polish the sound up?

Would you say that your sound is unique in Liverpool right now? I mean there’s nobody like you at the moment?

Do you feel that you’ve got a look?

Lydia: I just think we are all our own characters. There have been a few times when I’ve had a few criticisms when people have said ‘the music doesn’t match what you’re wearing’ and to me that doesn’t make sense. For me, what I’m wearing is me, that’s my character. For some reason it just looks together, it just clicks together and goes with the band.

How’s it going with Deltasonic have you had any physical releases out?

Because there’s been no vinyl release of this one, it’s out on download on Deltasonic. We’ve released Hangman/Michigan State and then I don’t know if you are aware of Blak Hand? they have released it on cassette. I like cassette anyway and I’m happy that way as people like to revert back.

Do you think that people are playing the vinyl they buy?

Lydia: It’s become a bit of a fashion statement. In HMV all you can buy is Adele on vinyl, people are buying it just to have and not be even aware of what it is. The dads are going ‘I remember vinyl’. It’s like cassette now, it’s become a recycled thing.

What’s the next thing for you and what was the biggest gig you have done so far?

Shaun: The biggest thing we did so far was for the launch of the single, we made enough money so if we didn’t have the label behind us we could finance the next record. It was good because it was a fucking chocker and it’s always good when you play.

Lydia: It felt for me that that was the best gig we ever did at The Shipping Forecast (A New York Style Basement on Slater Street). It felt like the best for me. It felt good to do our own show and have people there that were there came to see us. It just felt like a success really! Next move we are playing an all dayer at the Invisible Wind Factory. October time, to play some gigs around the UK whatever our agent gets us, d’you know what I mean? We need people to hear us and hear Psycho Comedy

Lydia: We know that for the rest of the year we don’t need to be looking for gigs. We’ve never had to really worry.

Once this wave that’s happening in Manchester at the moment where the kids are actually going to gigs – if that wave starts to hit over here, which inevitably it will, then you’ll find the whole demographic of your gigs changing.

Shaun: That’s my only thing sometimes, the age of getting into gigs, 18s, I always think all the fucking young girls and all the young lads when I was a kid we used to go gigs and we couldn’t ‘cos we were too young and it’s like they won’t come and see us on this tour and buy a T shirt, buy a cassette tape and they fucking can’t because there’s an 18 limit.

Is there a political element that runs through the band?

Shaun: We’re not one of those Death To Donald Trump bands, no disrespect to Cabbage or anything like that but we’re not about that do you know what I mean? It’s the art and the sound but at the same time, we have a poet that opens for us after the intro with words about council estates and that. Personally, I think those bands are too politically charged. I’ve got lyrics in one of ours that goes: “The imposter imposes his high definition pose, he says that your family knows but I’m not standing” – but I’m not waving the labour flag in everybody’s face you know what I mean? I mean I vote Labour but everyone’s got their own way.

Connor: I’m not prepared to go out there on stage and preach anything to anyone. There is one reason I go out on stage and it’s because I absolutely love playing music. I love being part of it.

Shaun: What scares me about politics in music is, I’m a massive Oasis fan and I’m a massive Blur fan right? I know it’s nonsense but I saw something on Facebook the other day that said ‘Fuck Blur, fuckin’ Tory band, and Graham Coxon and Damon Albarn are not Tory at all except for Alex James. That’s what’s scary about it. It’s like are we really arsed that much about politics? Because people don’t even know that one of the biggest bands of the 90s aren’t Tories!

New single Michigan State is out today (September 15th) – another slab of louche, NYC,  Stooges inspired swagger! Get a load of it below! Their press release goes:

“The neurotic bass sound that erupts and the caterwauling from frontman Shaun Powell and bassist Connor Duff, presents the raucous aural display for the next two minutes as the 2nd of their 2 tracks  from the colourful and chaotic Psycho Comedy as they release “Michigan State” on Fri 15th September 2017 on Deltasonic.”

The digital release is on Deltasonic and is complemented by a limited edition, white cassette limited to just 40 copies, released in collaboration with Blak Hand Records.