Psych Fest came to Manchester on Saturday. Nigel spent most of the day there and reports back for Louder Than War.

There’s a quarter of a mile queue for Covid checks ahead of getting even a wristband for the events which are strewn across Manchester, from The Deaf Institute to the Ritz. I was talking to a friend later and they had spent an hour in the queue, and he was reviewing for his magazine.

So Psych Fest is here and it’s taken some organising. No press passes; normal wristbands, so this review is as close to a punter’s viewpoint as it can be, with all the queuing and frustrations included.

I’m here pretty early to see Loose Articles, as is the poor guy in front of me is flashing his ticket and Covid test nonchalantly at the stewards on the gate.

“You got a wristband?”

“You need to get a wristband from Hatch. It’s round the corner, on the left”

And so, said fella, would miss Loose Articles because of the queues. It is what it is, but I don’t half feel sorry for him!

Anyway I’m in Gorilla and in time to see Loose Articles, having only seen them three weeks previously at The John Hall gig at the Ritz. That time they were in the basement, this time they’re on a main stage. Having nabbed a support slot with Foo Fighters next June, I guess their cachet has risen somewhat.

One of the freshest bands on the Manchester scene right now, they don’t disappoint. They look great and sound amazing; the place is jam packed with a sea of smiling faces full of appreciation. They were good at the Ritz, but seeing them on this larger stage makes a whole world of difference. There’s a sharp, angular freshness to the band. A thunderous Hanley-era Fall back beat and bass, cut with jangly guitars and Natalie and Tree’s screechy vocals makes for a heady mix. It’s a short, half-hour set but bright and punchy, and I echo what Wayne alluded to in his review at the Ritz. Loose Articles are special – they remind me of Essential Logic/X-Ray Specs – stripped back and raw. At times they struggle to stay in time, but this just adds to the statically charged raw spiky garage feel.

It’s over the road for Porridge Radio and another long queue which thankfully moves quickly.

They are an altogether more serious affair. Accomplished and deliberate in their delivery and as lo-fi as you can get, particularly after witnessing the popping candy over the road. It must be something to do with these introspective, male-drummered bands.

Porridge Radio are low on bouncing melodies, but they more than make up for it with the repetitive energy that exudes from some of the longer, more drawn out songs; at times straying into shoegaze territory. The crowd sway rather than dance but there’s huge appreciation in the packed venue, especially on the explosively finishing Long, which gets a huge round of applause.

It’s a short wait (without leaving the venue!) for PINS, who open with a huge drum and synth wall of sound, and haven’t I seen the guitarist before? Yup – she plays in Loose Articles too.

It’s bouncing bombastic beats in a non-stop barrage of whoops and shrieks from the now five-piece band. Slimmed down from two full drum kits to drums and toms, the two percussionists rattling off each other, keeping the band tight and punchy. It’s powerful, upbeat and fresh, PINS’ sinewy sound and tasty beats filling The Ritz with Faith’s voice pinging around the venue.

Part way through PINS I attempt to stick to my plan of seeing Do Nothing over at Gorilla but I’m thwarted by a queue that stretches round the corner, virtually reaching Oxford Rd. Those in the queue have no chance of seeing the band so I  give in and accept the fact I’m going to miss them. I sink back into one of the sofas on the balcony to soak up the rest of PIN’s set.

I’m flummoxed now. With nothing planned until 7pm I’m thinking maybe Folly Group in the basement followed by a kebab…

You see some of the more offbeat bands at the smallest of venues and you can’t get sweatier and tighter than the basement at The Ritz. There are walls and columns in the way, so it’s the hardest venue on Manchester to actually see the band performing. At one point I can hear them but can’t actually see them – they sound amazing – rich bouncing metallic bass with a synth driven wash, the drummer in the far corner providing vocal duties. They’re tight and punchy, sometimes drifting off into jazz territory, then the next minute there’s Mush in there. It all careers along mercilessly. It’s hard to fully appreciate them in such a confined space but I want to hear more.

Whyte Horses are playing the main stage when I surface. It’s a line of faux leather jump suits with the one on the middle playing a huge red guitar. They’re playing a track that appears to be based on White Horses, the sixties’ theme to the TV series which was a hit by Jacky, and frankly it sounds great. It’s Byrds’ish, jangly and melodic, and having just had my ears ripped off by Folly Group, it sounds refreshing.

Other tracks sound a bit like Dire Straits so, less enamoured, and after a risible cover of Ca Plane Pour Moi and the three front-women throwing their hair forward ‘80s style, I stroll off in the direction of the bar. I meet up with Carl Maloney of RGM and I feel he’s trying to lead me astray. A couple of pints later Whyte Horses don’t sound any better but we hang about for Girl Band.

“I spent all my money on shit clothes” – oh brilliant! It’s utter mayhem from start to finish. The singer looks and sounds like a cross between Wild Man Fischer and my old English teacher, Mr Proudfoot. I think it’s the tweed jacket. At times he starts the songs with his back to the audience (I’d be tempted to keep an eye on them to check they were still there…), but this single act of couldn’t-give-a-fuck defiance defines this band. Girl Band are utterly deranged and they might just be my new favourites. Take all the mental parts of IDLES and blend it with Junkyard-Down In The Mud era Birthday Party and sprinkle with a dusting of Aphex and you might just begin to understand how intense this band is.

Having been completely upended by the apparently sanguine lead singer at the beginning of the set, we are taken on a noise rollercoaster – an intense-off-kilter-metallic-prodigyesqe-piledriver of a set. It’s stunning – I’m blown away – I haven’t heard anything like this before. It defies boundaries. His sweet Dublin lilt drifts over every mad beat. The only real analogy that does this band justice is opening the doors of a blast furnace. The pressure is palpable, the beats visceral and the energy, explosive. It’s unbelievable – like the Aphex Twin’s Come To Daddy monster screaming in your face.

As soon as they finish, I head off to Yes to see Yard Act. I have been dying to see this band since playing Fixer Upper on our radio show in early 2020. Their twinning of story-telling narrative and bouncing beats is highly infectious, and each subsequent single has hit the mark. They’ve been quiet since the brilliant Dark Days, but I’m so looking forward to new stuff.

When I get to the venue there is a queue round the side street and back on to Charles Street. I reckon there are around 250 people, but it’s getting longer by the second. Having popped into Spar on the way, I’m munching on onion bhajis and chatting to the guy next to me. It feels kind of OK, that we will get in, but as the minutes slip by my hopes start to fade, and after forty minutes, at twenty five past eight (they are on at 8:30) I give in and head back to The Ritz.

I asked the official about press passes when I picked up my wristband and she told me ‘those days are gone’. Well, the days of reviewing the bands we want to feature at a festival like this are also gone, which is a huge shame for them. I would have loved to have told you about Yard Act, but if the reviewer can’t get in the venue, then… I will see them again no doubt.

I head back to the Ritz, tired and more than a little fucked off if truth be known. The excellent Beak are in full swing, but of course I have missed most of the set and am playing catch up. What I hear is amazing.

I really want to see Billy Nomates at The deaf Institute, but frankly, the thought of walking a mile up Oxford Street only to see another ridiculous queue puts the thought right out of my head. I have played her stuff a lot, the Sleaford Mods collaboration Mork & Mindy and recent track Heels being particular highlights.

There are other bands I want to catch, Stereolab and John. But frankly I’ve had enough and without wishing to come across as a petulant diva, I do one. I’ll catch them all again I guess. 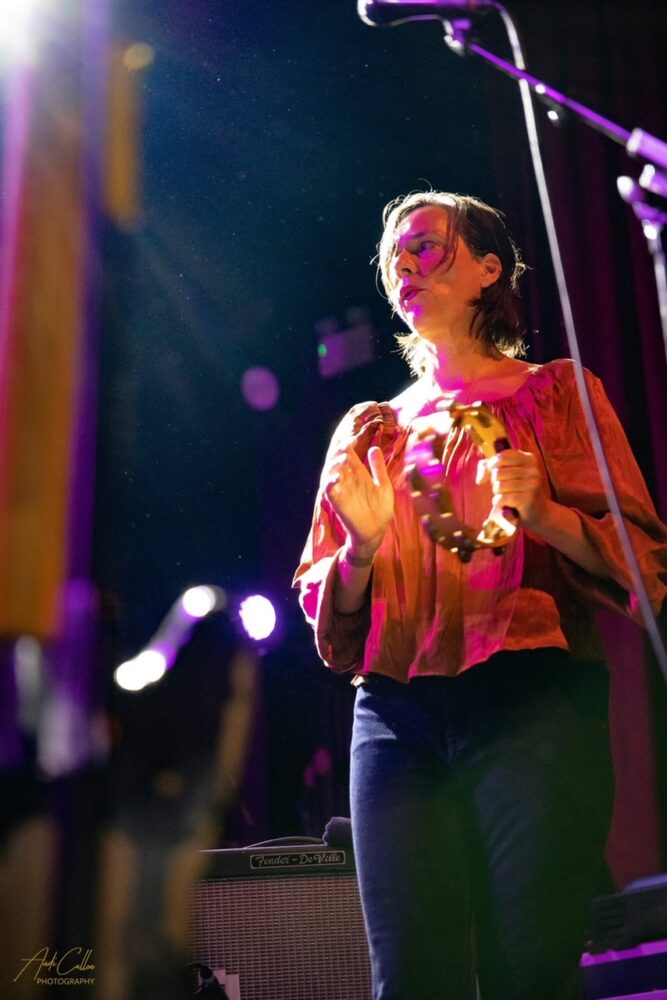 All in all a great festival, with some amazing bands. I sympathise with the organisers, but they showed no respect for the writers, and to expect us to experience the event as a punter whilst incredibly revealing, is ultimately pointless. What’s the point in reviewing an event when you can’t get in…?

Huge thanks to Andi Callen and his photo pass which enabled him to get the amazing pics above. (The Folly Group one is mine!)

Words by Nigel Carr. More writing by Nigel on Louder Than War can be found in his Author’s archive. You can find Nigel on Twitter and Facebook Listen to Nigel’s show on Radio Alty – Wednesdays 9-11 pm! Photos by Andi Callen Photography Andi is also on Facebook