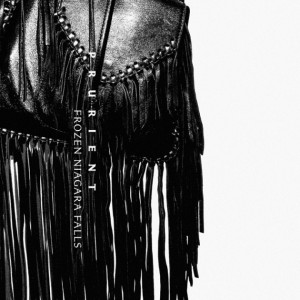 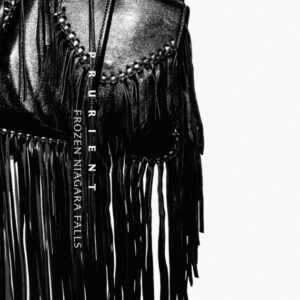 Dominick Fernow is on typically bleak and uncompromising form in his latest Prurient offering, says Louder Than War’s Paul Margree.

At 90 minutes long and welding together blizzards of harsh noise, mournful synth arpeggios, frenzied EDM beats and guttural gobbets of vocalese, this new Prurient album arrives like a great big fuckoff torrent of rocks from a mediaeval siege engine.  It’s bruising, abrasive and at times depressing. Yet at others it is cathartic, emotional and strangely moving.

Frozen Niagara Falls is the first full-length album Dominick Fernow has issued as Prurient since 2011’s Bermuda Drain – although, as befits an artist as prolific as he, there were plenty of shorter outings in between, including several 2012 releases on his own Hospital Records, 2013’s fantastic Through The Window on Blackest Ever Black and his bracing split release with JK Flesh in the same year.

And, of course, Fernow’s Vatican Shadow project has gained considerable momentum during that time, with plenty for those of a noise-industrial-techno bent to get their ears round. 2014’s Death Is Unity With God is particularly recommended to accompany to your morning coffee and Danish, and if his Boiler Room set in San Francisco from July of the same year doesn’t get you dancing round the kitchen while berating the excessive power wielded by the  military-industrial complex, well, I feel bad for you son.

Frozen Niagara Falls was put together amid all that activity, between late 2013 and spring of this year. Its long gestation has result in a considered, detailed work that brings together several different strands in Fernow’s aesthetic into something – not unified, perhaps, but definitely consistent. It stands like a vast assemblage in the landscape, as if the obsidian monolith from 2001: A Space Odyssey had been transformed under huge geological pressure into a granulated, many-faceted chunk of rock, its different facets and textures glittering in the pale sun, beautiful and diamond-hard.

Opener Myth of Building Bridges is a titanium-hued statement of intent. Harking back to classic Prurient tracks like 2006’s Apple Tree Victim, its throbbing synth chords are scraped and strafed by an insistent, buzzing wave of noise, with the cleaner production and nuanced sound design heightening its sense of drama and desolation. Like a busted radio playing 24-hour new age dolphin songs, it seesaws between immense, awed glamour and utter destruction. It’s a vision of some ancient wonder of the world – a library or museum, perhaps, full of treasured of incalculable value – slowly demolished by occupying forces, its treasures looted, destined only for the private vaults of oligarchs and Silicon Valley billionaires.

But it’s the album’s title track, split into parts across the second half of the album, which brings this dialectic of filth and grandeur a level of sophistication previously unseen on Fernow’s recordings. If other tracks seem to be grounded in the dirt and rubble of our physical world this is positively cosmic. Of course, this being Fernow, I’m not talking about music which evokes some transcendent euphoria. No, with an event horizon of a drone wrenching us out of the everyday and heavy synth sweeps given a right old belting by a carpet-bombing of noise, this is the sound of an alien invasion. The full-on Cylon nuclear attack. No time for protect and survive, people.

Part One – Portion One, to give it the proper appellation – is full of this heaving apocalyptic noise, but in Portion Two, there’s a sudden jump cut. Halfway through, the tumult of sound switches to an overloaded electromechanical glitch-blizzard, like some weird hive full of insectoid nano-bots asset stripping the Googleplex for nutrient data. Infestation rather than invasion.

Frozen Niagara Falls is not the easiest album to digest in a single sitting. Yet it does cohere and Fernow is on sure-footed form throughout. He has a particular talent for looking both forwards and back at the same time, referencing sounds and titles from his back catalogue while moving things into new territories.

Take Cocaine Daughter. Anyone who knows anything about Fernow’s work will be unable to read that title without being reminded of his seminal Cocaine Death cassette (itself reissued on vinyl last year). But where Cocaine Death was harsh, overloaded and extreme, Cocaine Daughter is one of the most minimal and free-form pieces on offer here, a slowly phasing analogue synth line embellished by background chords and subdued whirrs and clanks, before a circular saw of looping buzz cuts in and Fernow gives it up with some fittingly sepulchral lyrics.

Sonically, this merging of old and new is best exemplified in the scouring power electronics rave up that is Poinsettia Pills. Listening to it is like having your frontal lobes rubbed down with wire wool soaked in bleach, a sheet of white noise suddenly cutting to a hyper-BPM super harsh gabba bedlam, with Fernow screeching “JESUS IS KING…THE FIRE IS SLOWLY DYING… I BELIEVE… I BELIEVE”. Throughout, Fernow uses EDM bait and switch techniques to add dynamic range to this tumult, like some horrorcore Skrillex, with abrupt stops and starts that are just, like, killer drops bro. I could actually imagine a basement full of gurning, hysterical ravers going utterly mental to this at 7am, their synapses frayed and eyeballs melted by a weekend on the razzle.

For all that, however, it’s the moodier pieces that pack the biggest punch. Greenpoint’s tale of the aftermath of a suicide is both harrowing and moving – apparently based on Fernow’s own experiences –  its emotional heft heightened by its shifting sonic texture. Effectively three songs in one, the opening sequence of 12-string guitar is initially disorienting, its psych-prog picking at odds with the dense tracks that precede and follow it. This section soon gives way to a piston-pump rhythm and barrage of groaning noise, which is, in turn, followed by stark retro synths, accompanied by Fernow’s desolate poetry  (“Your teeth are yellow sponges”). Gorgeously upsetting.

And then, right at the end of the album, there’s another swerve. Christ Among the Broken Glass shifts into the kind of epic and haunted mystery more usually associated with Fernow’s work under his Christian Cosmos alias. It shares with Greenpoint a hypnotic descending guitar line, but here the guitar – star-bright and pin sharp, with a tone that’s almost zither-like -continues through the piece and forms its backbone. Two parallel bass drones lock any forward motion into a long, slow orbit. Way down in the mix, what sounds like a fretless bass thrums.

Slowly, other instrumentation creeps in. There’s the sound of rain. Or is it flames? A battered cymbal rattles like a dustbin lid kicked across a wasteland. “Among the broken glass/You can find Christ feeding the poor/With what little he has left/Frosted spoons of baby food/Pushed into bottles…God is here in this,” murmurs Fernow, barely audible. It’s stark, mournful and beautiful.

Positioning this powerful and emotive track at the end of the album seems significant. Is this Fernow signalling another change in direction for Prurient, following his controversial introduction of techno-derived rythmns a few years ago? Has the last hour and a half been an almighty summing up of what’s gone before, a clearing of his desk before embarking on some new adventure? I’m not sure. But the sheer invention and range of Frozen Niagara Falls proves that, more than a decade and a half since his first Hospital Records CDr emerged kicking and screaming into the world, Fernow still seems to have plenty left in the tank.