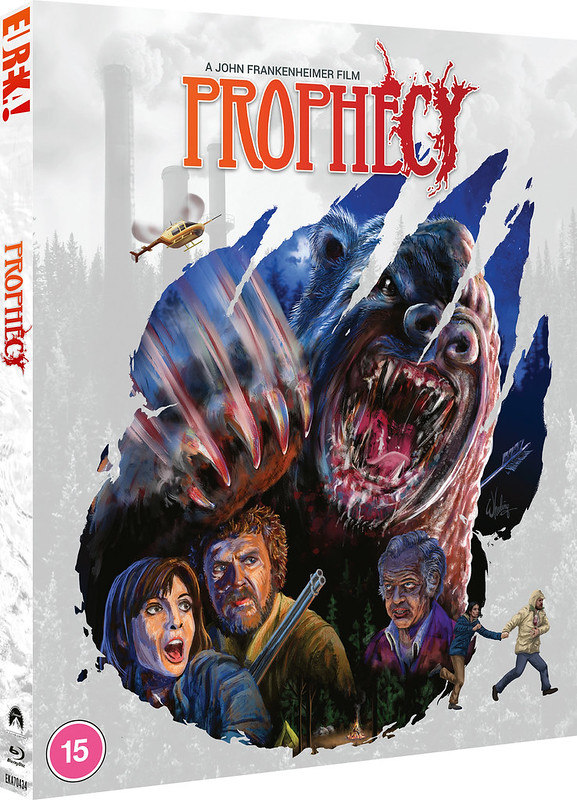 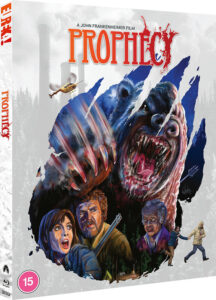 Directed by John Frankenheimer (The Manchurian Candidate & French Connection II) and written by David Seltzer, whose screenplay for The Omen won him many admirers three years previously, studio hopes were high for Prophecy on its release in the summer of 1979.

Its first hour largely concerns environmental issues. These mostly affect the indigenous population, who refer to themselves as O.P.s, or Original People. They’re suffering from a range of heath problems, with a suspiciously high number of their children being born with deformities and many adults behaving as if drunk when not a drop of liquor has passed through their lips. Something is clearly awry and they blame pollution from the nearby paper mill. Their protests are growing.

When several of his lumberjacks go missing, mill owner Bethel Isley points the finger of blame at the O.P.s. He also rubbishes their claims that Katahdin, a Sasquatch-type creature in their folklore, is responsible for the disappearances, ensuring that the land is not desecrated for the sake of greed. 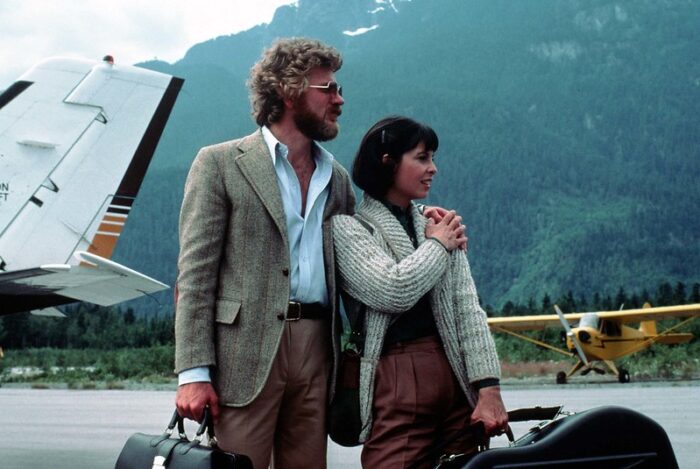 In a clever use of foreshadowing, we’re first introduced to Washington D.C. doctor Robert Verne (Robert Foxworth), in an overcrowded ghetto apartment, where he is treating a child who has been bitten by rats. His interests include social and ecological issues, and he is assigned to file a report for the Environmental Protection Agency on the impact being made by Isley’s paper mill on the area.

Along with wife Maggie (Talia Shire, who played Connie Corleone in all three Godfather films), he sets out to an idyllic part of Maine to investigate the dispute and, hopefully, enjoy some time relaxing far from the city.

On a fishing break, he spots a salmon that looks freakishly big and then a giant tadpole. A vicious racoon enters the cabin where Maggie and Robert are staying and attacks them. It isn’t going to be easy to get rid of that stench any time soon. Clearly, something is wrong with the local wildlife with mutations taking place, but he ain’t seen nuthin’ yet.

The tests he carries out prove that methylmercury has contaminated the local river and lake. His findings terrify Maggie. She is pregnant, though she hasn’t yet told her husband, who believes it’s selfish to bring a child into what he views as a rotten world. And she has eaten some toxic fish caught locally.

Part of the eco-horror cycle of the 1970s, it would be hard to doubt the sincerity of screenwriter David Seltzer’s message, even though many of the environmental concerns are dropped once the horror element comes into play. Like Jaws, Prophecy takes its time before introducing us to the deadly creature, which will soon dominate the action, as it goes on a highly destructive all-night rampage.

The movie performed well at the box office, but critics weren’t so keen. It had the misfortune to be released within weeks of Ridley Scott’s masterpiece, Alien. Comparisons between the two monsters were made and a bear with partly flayed skin put together at the last minute was never going to compete with the nightmarish visions of H. R. Giger.

The very final scene makes it clear that the idea of a sequel must surely have been discussed, but Prophecy II was never commissioned. Stephen King is a big fan of the movie and Quentin Tarantino has a soft spot for it too. Despite some flaws – like the schlocky attack on a family of campers – it’s easy to see why.

Always highly watchable, John Frankenheimer demonstrates his directorial mastery in one scene, where a group of stranded characters sit silent in a subterranean tunnel as they hide from the monster. The tension is – no pun intended – almost unbearable. Little touches, like the reflection of fire in an elder native’s glasses, are visually memorable and he gets effective performances from the entire cast, with Talia Shire and Richard Dysart both in particularly fine form.

The indigenous tribe are treated sympathetically, although contemporary critics might point out that of the actors playing the three main native characters, one is an American of Italian and Irish descent, one was a native and another partly native. By the Hollywood standards of the 1970s, though, this was decent representation.

Sadly, over forty years after its release, the message of the movie remains relevant, with pollution in industrial wastewater still a problem around the world.