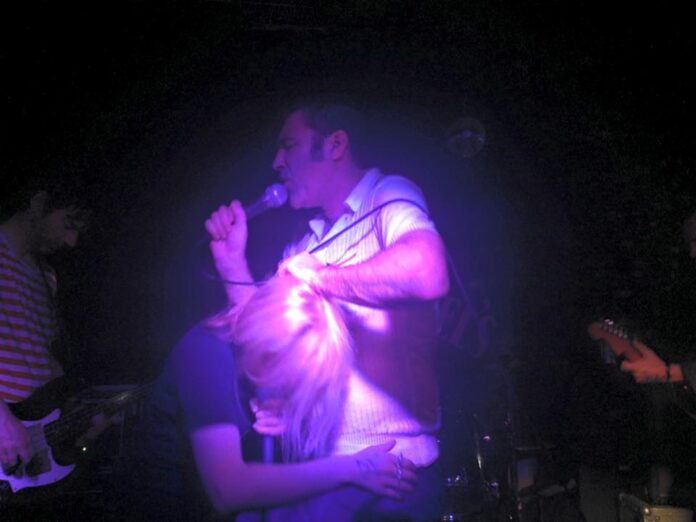 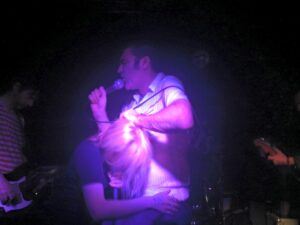 The words razorblades, slash, chaffing, headless and psychotic feature heavily tonight. We’re in for a good one.

It is very rare that you get to reference tonight’s headliners Prolapse (1991-1999) when describing a band but I have been using it all year when writing about the trio The Ethical Debating Society. There is something about the vocal clashes and narratives, between vocalists/guitarists Kris and Tegan, that begs for the comparisons, none more so than in “Razor Party”. The driving, hardcore drumbeat is the bass, on a promise, the guitars bring the scream in songs like “Cover Up” or “Kill You Last”.  It’s a riot of pop-punk: a cut and paste of politics, sarcasm, freedom, relationships. This gig coincides with the launch of the debut album “New Sense” and there’s a queue of people who came for the bands they know (Slum Of Legs and Prolapse) buying it from the merchandise stall.

Buzz, buzz, buzz, Slum Of Legs, buzz, buzz, buzz. This is their hometown and they have the hot support gig. They don’t write set lists, just announce the songs but in the excitement I seem to have wiped my notes and song titles on my phone. All that’s left is: squeeeeeee. It’s the musicality meets riot grrrl or queer-punk mentality that makes this special. There are six of them up there making merry and it’s a beautiful thing, but it’s the violin, keyboards and wierdy stylophone sound, the vocalist’s boldness and brilliance, that’s bringing the party atmosphere. Why has nobody thought to make a Huggy Bear meets The Levellers combo before?

It is not about the return of Prolapse, who had critical and radio success for nearly ten years – Louder Than War’s John Robb worked on two of the four albums – with noisy pop songs like “Pull thru’ Barker”, and the let-it-all-out ones like “Tina This Is Matthew Stone”, (tonight’s two-song encore right there). It’s a celebration, which started because Mogwai wondered if they’d like to support them in the summer, in the UK. This band of seven are now scattered all over Europe so it’s also rare for them to be able to be in the same place, at the same time. 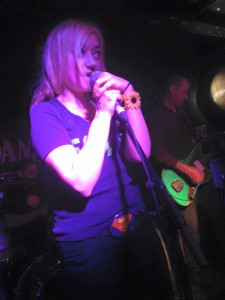 Tonight though, is the last headline slot in a small venue, probably ever, and in vocalist Scottish Mick’s own words, they’re getting the hang of it again now – less sweat and more joy. Opener “Psychotic Now” is a perfect tease, coming out of one bass line, guitars building into what we know: driving rhythms, rock and roll melodies in panic mode and Linda Steelyard and Mick Derrick, both at odds with their vocals, yet together in the way of contrapuntal rhythms. (Love this band forever, who else makes you think of Bach as a reference point?) It’s also one for the Prolapse Massive, since “Psychotic Now” came as a split flexi disc with fanzine Warped Reality. In fact WR mamma, Andrea Feldman, has travelled from her hometown of Providence in the States for the tour and is standing right next to me at this very moment, although you never actually stand still at a Prolapse gig, it’s impossible not to catch the nervous tension. Linda rubs her hands together repeatedly, rocks back and forth, Mick paces and pokes, messes dangerously with the mike, stretching it’s wires, kicking about in a puddle of beer. The performance fascinates and entertains. 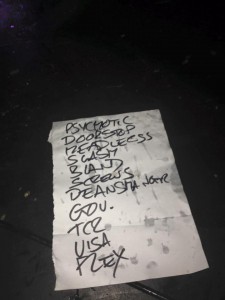 The pop songs are a pleasure, “Killing The Bland”, “Doorstep Rhythmic Bloc” and “TCR”. Mick talks about that stage of Prolapse and being in New York to shoot the video for “TCR”, clearing the streets of Manhattan, and no, he did not fall in love with his make up artist. The other songs tonight (“Flex”, “Slash”, “Government Of Spain”, “Visa For Violet and Van”, Headless in a Beat Motel”) are like the demons inside you know you need to make friends with – being as the narrative and soundtrack are an antennae to the human condition, with piercing observation and affection – and the loop and groove of three guitars and bass, the relentless hardcore attitude to funky drumming, drags you into its tow.

Like good theatre, Prolapse don’t leave the crowd needing to be in their gang, or desperately wishing this was a comeback, just renewed enthusiasm and the strength required for our waving our freak flags high.