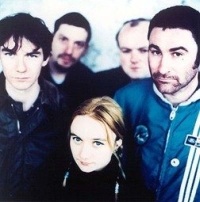 The original six piece band will be playing two dates in June, Glasgow on the 20th and London on 24th.  The venues and full gig line ups will be announced shortly.

Prolapse have reunited to play these dates – their first since 1999 – with no real thoughts of doing anything else.  But it is possible more dates will be added as things unfold.  The band are considering releasing some music and this would probably consist of recordings made in the 90s, but nothing is set in stone.  So just the two dates for now.