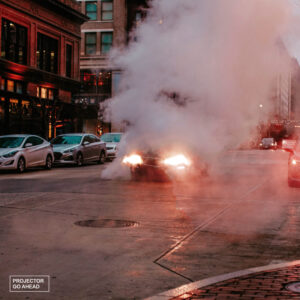 PROJECTOR are Lucy Sheehan, Edward Ensbury and Demelza Mather and they hail from the indie rock melting pot of Brighton. They are currently riding high following a big year in 2018 in which they toured Europe, signed to London based label Roadkill Records, released their debut EP on vinyl and sold out their biggest headlines to date.

And now, April 26th saw them release their first track of the year – Go Ahead. The track was written shortly after a secret Halloween show with tour mates Tigercub in which PROJECTOR performed a set of Pixies covers.

A thick and distorted wall of noise starts this great anthemic track, with a deliciously infectious riff that’s momentarily reminiscent of the Fang classic The Money Will Roll Right In (famously later covered by both Mudhoney and Nirvana). The noise is cut for the verse, which introduces the matter-of-fact vocals of Ensbury singing about “sucking on a hologram”. The throbbing bass that runs throughout is just filthy, whilst stabs of guitar break up the throb to play with the metronomic drums. The verse includes the very telling “it’s all too late, I can’t relate, every day the same old same”. This song is about the frustration of the daily grind, and the continuous striving for something less repetitive and the passion to leave it shows in spades.

As soon as the chorus comes in we are awash with the wall of noise teased at the beginning. Once the second verse is finished, the chorus is augmented by the brilliant harmonies and duel vocals of Sheehan. A brief breakdown allows us to catch our breath, before the verse and refrain of “go ahead and suffer” is pummelling the listener into a Sheehan and Ensbury vocal gymnastic submission. And before you know it, the 2.51 is over.

This track hooks you in immediately and you are taken on a gorgeous indie rock ride of your life. It has everything a good song should have, with extra knobs on.

If the rest of their oeuvre is as good as this, then man I’d love to see them live. Check this single out now – PROJECTOR just may be your next big love. Oh and you will be humming this tune for days I assure you.

They’ve supported the likes of Tigercub, Demob Happy, Deap Vally and Blood Red Shoes, and are due to support Xcerts and Desperate Journalist as well as securing slots at UK festivals The Great Escape and Camden Rocks. Be sure to check them out.

May 9th – The Hope & Ruin, Brighton (The Great Escape)