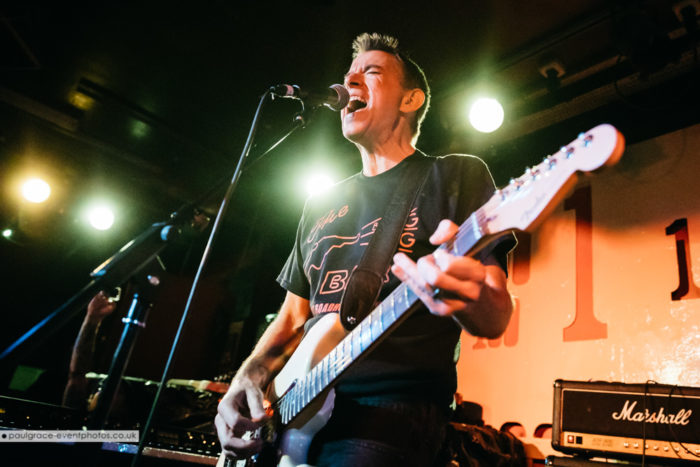 Featuring members of The Adolescents and D.I. alongside Rat Scabies and Paul Gray, Professor And The Madman rock the 100 Club for a special one-off gig.

Supergroups are an anomaly. From fiscally-focused propositions like Asia to fun loving acts such as Me First And The Gimme Gimmes via the chin scratching appeal of Chickenfoot – it can all be a bit of a mixed bag. And while the likes of Cream have left long lasting legacies in their wake, there are also groups such as Neurotic Outsiders whose contributions have been sadly relegated to the footnotes of music history. Ultimately, a band’s chemistry eclipses the individual talents of its members. And, as seen in the difficult to stomach jam sequences of the 2016 documentary Hired Gun, a gaggle of gifted musicians does not an enjoyable listening experience or a great song make. For Professor And The Madman, however, songs are king. And the supergroup dynamic is an electric bonus.

The 100 Club is bustling with punky energy. The prospect of seeing punk architects in action at a venue that was at the epicentre of the scene they helped to create fuels the anticipation. “I hope they do some songs from The Damned. Or maybe some Eddie And The Hotrods”, exclaims the spiky haired audience member behind me. Extolling the virtues of the rhythm section of Professor And The Madman’s previous bands is understandable. Especially as tonight’s performance is being billed as a one-off event with this line-up. Thanks to the wonders of file sharing and Facebook, the third album (Disintegrate Me) from this Southern Californian band features Rat Scabies and Paul Gray on drums and bass. A duo who have not played live in two decades. And, while social media has undoubtedly made the world a smaller place, the distance between album’s British and American counterparts makes rehearsing an impossibility. In fact, it’s safe to say that this UK-US union only had the opportunity to play together for the first time just prior to this gig. It’s a very 2018 dynamic. In a venue where a lot of the attendees have 1977 on their respective minds. But this wasn’t to be just another punk gig.

Alfie Agnew and Sean Elliot take to the stage, both with Fender guitars around their necks and keyboards to their side, with The Damned’s rhythm section from the early 1980s behind them. Kicking off their set with Peace Bombs, from 2016’s Elixir, Vol II: Election, the mix out front is a far too suitably bombastic roar. Rat Scabies, despite being surrounded by a Perspex baffle, dominates the sound with a ferocious attack on the drums that recalls early Keith Moon. While its historical significance is self-evident, the 100 Club is by no means a great sounding venue regardless of having many a fine sound engineer behind its desk. This evening is no exception and the underpowered PA’s limitations are felt in the first quarter of the band’s set especially. The ‘Chris Squire meets Paul McCartney’ attack of Paul Gray’s Rickenbacker 4001 gets lost amidst feedback during the intro to the band’s second offering, Nightmare, but the Essex-born bassist is still smiling. It’s clear that this whole endeavour is a labour of love for all of the members involved and the fact that Professor And The Madmen are too big sounding for the 100 Club isn’t going to interfere with that dynamic. In a way, they should feel jolly well proud of it. 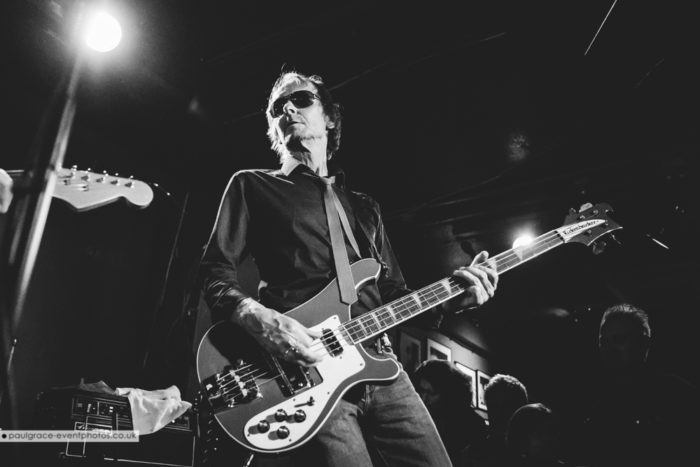 Agnew and Elliot alternate lead vocals throughout the 14-song set with Scabies gazing at the former’s every movement like a hawk for guides and pushes. Occasionally things are a bit ramshackle with a false start here and there but these are laughed off by the group and audience alike and the energy levels never cease.

Freed from the inevitable limitations of recording remotely and (most likely) to a click track, Scabies and Gray transform of the energy of the Disintegrate Me album into more raucous territory. This is felt most notably on the track Wishes. Whereas the album version recalls early REM a la Gardening at Night, the live interpretation is far more aggressive and owes more to The Who than the Georgian quartet. The material that predates tonight’s line-up also enjoys an audio makeover. Dearest Foe, Haunted House and Filmstar, all from the Good Evening, Sir album, take on more dramatic and manic directions in their live incarnations at the 100 Club tonight.

Professor And The Madman are unashamedly proud of their influences. In fact, the band’s entire set is a celebration of the music that helped shape the lives of Agnew and Elliot. And with titles such as Space Walrus, a song off the new album that closely references the fab four’s Eggman phase, it’s done in a manner that’s equal parts playful and reverential. I can imagine the fun that the two Orange County lads had in recording this ode to The Beatles and that enjoyment was clearly felt threefold onstage. It was also a spectacle for the eyes and ears with keyboards being swapped with guitar parts and ambitious vocal harmonies aplenty. 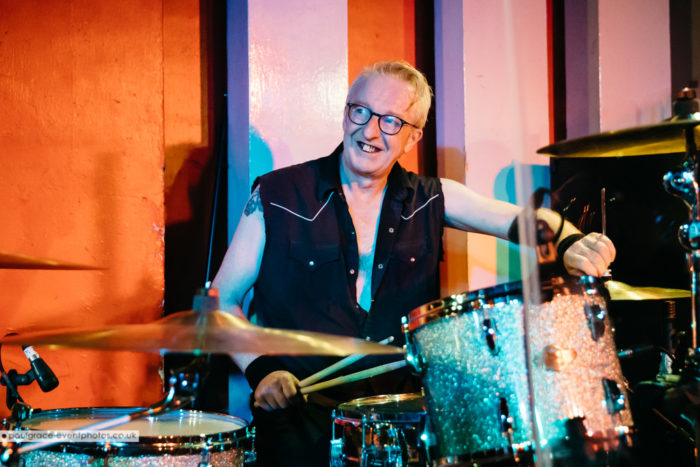 In the middle of the band’s encore, Elliot offered an amusing tale about the band’s recent endeavours. “We were rehearsing at this studio yesterday and in the next room was Adam Ant. We were having a break and saw Adam come out. As soon as he caught a glimpse of Paul and Rat – he hid”. It’s good to know that the spirit of punk is still strong enough in Gray and Rabies to scare off the Dandy Highwayman. That said, the punters who came out to the 100 Club expecting just another punk gig would have been disappointed as Professor And The Madman are far more varied prospect than their Spirit of ’77 roots might hint at. And it’s not every day you get entertained by a Professor of Mathematics onstage. Especially not at the 100 Club.

Did they do any tracks by The Damned? They didn’t need to.