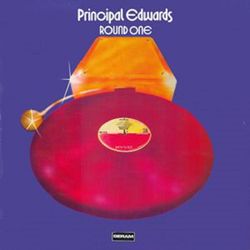 Principal Edwards – Round One

I fall into the age category that was a little too young for the first flush of Punk. As a result I never had to endure the excesses of Prog which seemed to have been regarded as the natural enemy and unintentional instigator of Year Zero. The interminable soloing, the dopey storylines of the concept LPs, the horrible clothes. I missed all of that, thankfully, coming straight into a Punk Rocking 1978 when that stuff had been safely shunted down into a quiet side-line marked “terminally unfashionable”. The very name “Principal Edwards” would have me in my mind, without knowing anything about them or hearing them play a single note, imagining the kind of dismal act with flutes and stuff that would bore me stupid(er) whilst I waited patiently to see the Adverts on the “Old Grey Whistle Test”

But there is another side to that comment “endure the excesses”. If I didn’t do that, did I also miss the highlights when that kind of stuff was reigned in, that possibly produced some adventurous art rock that bore some comparison and influence on the Post Punk scene? After all didn’t Public Image Limited, who were spearheading that scene at the time, had a guitarist in Keith Levene who was a Yes nut and ex-roadie?

Even this far on I have to admit I haven’t gone out of my way to listen to much of it, though I did like The Nice’s output on Immediate. So Principal Edwards come to me pretty fresh….

They sprung from the reminder of Principal Edwards Magic Theatre, a high hippie commune group of poets, musicians and artists, yeah what would have been fashionably called a “multimedia” act years later on (another post punk link? Think of all those catch-all outfits like BEF, PIL etc). Big favourites on the John Peel show in the early part of the decade, by 1973 three original members had formed the truncated Principal Edwards, both in name and line up. Coming out with a more “rock” orientated sound with none of the free-form of their previous incarnation, they despatched the dancers and poets to children’s television in the main and clearly aimed towards the mid-70s album charts rather than the “happenings” of yore.

After all that premise and build up, grrr, the first few songs on “Round One” aren’t actually that Prog at all!! Recalling Pink Floyd’s Nick Mason to the desk (presumably all motor racing was cancelled at the time due to oil shortages opening up his availability) after he had produced the Magic Theatre’s LP “Asomoto Running Band” (see that title was just made to put the likes of me off!), this record is the archetypal tale of two halves. Opening track “Average Chap” has a lot more in common with glam and Bowie than Rick Wakeman and his wizard hats, “Hunky Dory” being the reference point here. This promising start is kept going by the next two songs, “Hailbut Rock” which approaches the kind of sound manager Miles Copeland would achieve with his “new wave” acts at the tale end of the 1970s and “Milk and Honeyland”, which is almost Powerpop.

“The Whizzmore Kid” carries on in a pop vein, though the prog flourishes are far more evident than earlier on and after the more or less straight pop rock of “Juggernaut” we’re in “hey nonny no” land as their previous folk influences show through big time on “Dear Mrs O’Reilly”. The record concludes with the most typical Prog offerings here, “Triplets” and the very long, five-part “The Rise Of The Glass-White Gangster”. I’ve got narrow points of reference for this, but they seem to me on these efforts to be similar to the keyboard-led sound of Egg or Hatfield and the North. It’s not unpleasant but the 10 minute plus finale isn’t really to my taste, being, like the worst aspects of Prog, far too clever for it’s own, and my, health.

The bonus tracks feature a single that preceded the album in “Captain Lifeboy”/”Nothing”, plus a later 7″ “Weekdaze”. The A side of the first single slips back to their folk influences and not out of step with what Ronnie Lane’s Slim Chance were up to at a similar time – it’s not unlike the Waterboys in fact, but a bit posher sounding. Covering both basses they’re back to the more bombastic rock sound on “Weekdaze” the follow on record. It seems from the sleeve-notes that the band weren’t really happy with how the LP turned out, perhaps wanting their mix of Zappa and Bowie to be more balanced towards Ziggy than Frank and not feeling it represented their live act.

Nevertheless on the whole this collection is interesting and I was surprised by how much of it I actually enjoyed. It’s not one that is going to make me sell all my other records, grow my hair, join a commune and start eating lentils on toast, but it has opened up my mind a little. Principal Edwards on this record present a slightly less unwieldy prospect than the heavy hitters of the genre and a good way into at least understanding Prog a little for agnostics like myself.